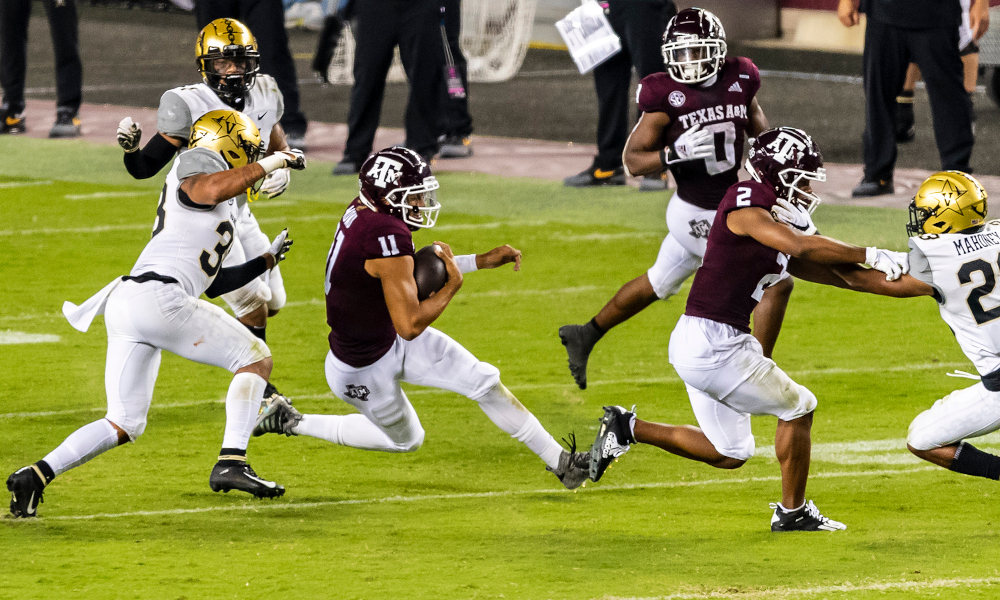 After the media received an amazing tour of the new renovations inside Bryant-Denny Stadium, the University of Alabama is prepared for an exciting home opener this weekend.

Jimbo Fisher, head coach of Texas A&M, won a national championship in 2003 at Louisiana State University on Nick Saban’s staff and won another one at Florida State in 2013. He enters his third season with the Aggies and fans are hopeful for big success.

RELATED: Alabama stadium tour was awesome and continues to show forward movement by Nick Saban and the program

Despite a 47-28 win over the Aggies in 2019, Saban was not pleased with his defense allowing over 100 yards rushing — including 90 yards to Kellen Mond at quarterback with a touchdown.

Following a minor knee injury in fall camp and not playing against Missouri, Alabama will have Christian Barmore back on the defensive line.

The sophomore turned in a strong performance last year at Kyle Field that included one tackle for loss, one sack and one pass breakup.

Saban refers to Barmore as the best pass rusher on the front line. Odds makers in Las Vegas have the Tide winning the game by 17 points.

With Brad Nessler and Gary Danielson of CBS having the call on Saturday at 2:30 p.m., yours truly of Touchdown Alabama Magazine breaks down five players for the Aggies that the Tide must keep an eye on.

The sophomore is back for the Aggies, following an impressive freshman season.

Isaiah Spiller made Texas A&M balanced on offense, as he totaled 946 yards rushing with 10 touchdowns on 174 carries through 13 games in 2019. Listed at 6-foot-1 and 225 pounds, he caught five passes for 41 yards last year versus Alabama. Despite the Crimson Tide holding Larry Rountree of Missouri to 69 yards rushing, Spiller brings more shiftiness to his style as a runner.

He had four 100-yard performances a season ago, including one against South Carolina. In its desire to play a complete game this weekend, Alabama’s defensive front looks to frustrate Spiller all game long.

Is this the moment he grows into being a great quarterback?

Fans of the Aggies and consumers of the Southeastern Conference have asked this question about Kellen Mond. He has a lot of potential, but something has kept him from taking the next step. The 6-foot-3, 217-pounder recorded 28 total touchdowns (eight rushing) last season and had 2,897 passing yards on a 8-5 team. He has the ability to break containment of the pocket and make athletic plays; however, Mond has yet to deliver Texas A&M to a win over the Tide. Although he will not have Jhamon Ausbon (opted out) and Kendrick Rogers (Dallas Cowboys), he still has a list of receiving options to target at Bryant-Denny Stadium.

Alabama must collapse the pocket from inside, set the edges and not provide any opportunities for Mond.

It has a nice group of receiving targets, including Ainias Smith and Caleb Chapman, but Texas A&M has a legit security blanket for Kellen Mond in Jalen Wydermyer at tight end.

As a true freshman, he was one of the bright spots for the Aggies versus Alabama in 2019, catching three passes for 49 yards with two touchdowns.

The 6-foot-5, 260-pounder has exceptional athleticism and can run smooth routes, regardless of his size.

Wydermyer was the Aggies’ No. 3 option at receiver with 32 catches for 447 yards receiving and six scores through 13 games last year.

He had two catches for 19 yards last week against Vanderbilt.

Whether it’s Christian Harris, Dylan Moses, DeMarcco Hellams or William Anderson (true freshman), the Tide will have someone to consistently account for Wydermyer.

Not only can move the chain on third down, but he is major threat in the red zone.

Defensively, Texas A&M has improved under the coaching of Mike Elko.

After surrendering 22.5 points per game in 2019, the Aggies allowed just 12 points to the Commodores.

Much of its success stems from the play of Buddy Johnson at linebacker. He led the team in total tackles (77) as a junior and tallied 9.5 tackles for loss, one sack, three quarterback hurries, one pass breakup, one forced fumble, one fumble recovery and one touchdown in 13 games.

Johnson had 11 tackles against Vanderbilt and according to Alabama running back Najee Harris, the senior leads a defensive front that looks to make it difficult for the Tide to run the football.

As good as Missouri’s group was, Johnson and the Aggies will provide more of a challenge for Alabama’s offensive unit to flex it muscles and sustain drives.

More an emphasis gets placed on Bobby Brown III, Jayden Peevy, Micheal Clemons and Tyree Johnson, but Marvin Leal is a sack specialist and tackle for loss machine. He collected 5.5 tackles for loss and two sacks in 2019 and is ready for more this week.

Leal, who stands at 6-foot-4 and 290 pounds, had seven tackles in week one — including two stops for loss.