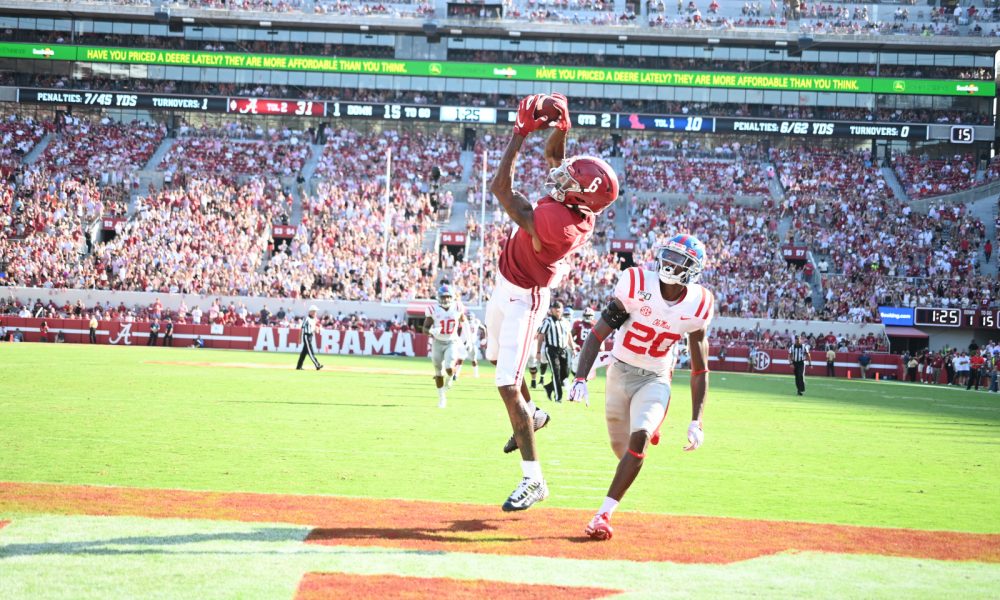 Alabama football is looking to pick up win number three on the season against the Ole Miss Rebels Saturday.

The Tide are coming off of an impressive win over Texas A&M while the Rebels are coming into the game 1-1 after picking up a win over Kentucky last week.

Key Insight: Analysis: “This is a huge opportunity for Alabama’s offensive line to establish the run game with Najee Harris and others. Steve Sarkisian will have some plays drawn up for Mac Jones and the receivers, but this is a game for balance with weather conditions. Seeing how Florida and Kentucky both had success versus Ole Miss with the run game, the Tide looks for the same result. Defensively, Alabama’s front line has to establish a consistent pass rush. If it can affect Matt Corral and John Rhys Plumlee in the pocket, it had a chance to create some turnovers”

Key Insight: “Ole Miss has an offense, who could be dangerous at times with Lane Kiffin at the helm. I expect Kiffin to throw some different and tricky at the Crimson Tide early and try to seek out a weakness in Alabama’s defense. It is going to be difficult for the Rebels to slow down the Tide’s high-octane offense but they might not have to. With rain expected, Alabama may attempt to keep the ball on the ground more than usual and slow the game down for ball security reasons. Since the Rebels have struggled to stop the run this year, the Tide could still be explosive but more so on the ground. I expect Kiffin and the Rebels’ offense to have some success in the first half and Alabama to take full control of the game before half and use its run game to secure the win.”

Key Insight: “Although the field conditions may be less than satisfactory, the weather may actually play into Alabama’s hands. Ole Miss’ run defense has been struggling mightily so far this year and if it continues today Lane Kiffin’s crew will not be able to out duel the Crimson Tide.”