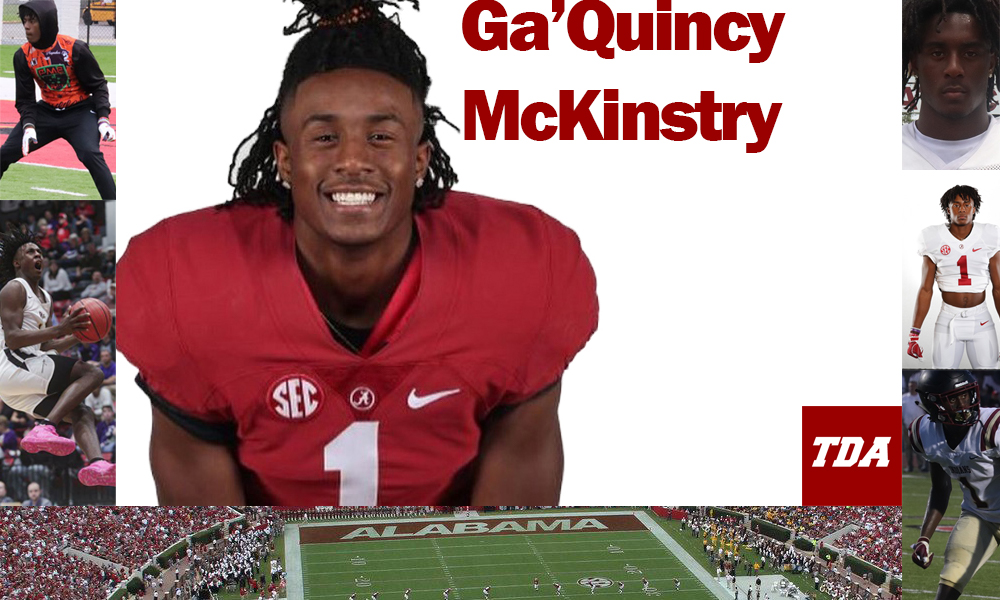 2021 5-Star athlete, Ga’Quincy McKinstry announced his verbal commitment to Alabama Sunday, giving the Crimson Tide a commitment from one of their top targets in the 2021 recruiting class.

McKinstry is Alabama’s twenty second 2021 commit and its fifth 5-Star pledge, according to Touchdown Alabama’s independent recruiting rankings. The Pinson Valley product chose the Tide over Auburn and Georgia. He is the fifth in-state 2021 prospect to verbally commit to Alabama.

McKinstry’s commitment to the Tide has been a long time coming. Nick Saban and company extended an offer to him in April of 2018 when he was a sophomore. Early on, Auburn looked to be in a great position to land McKinstry with several factors working to their advantage.

Patrick Nix, a former Auburn quarterback, was the head football coach for Pinson Valley High School and his son Bo Nix, who was committed to the Tigers at the time, played alongside McKinstry. Auburn was also among the first schools to offer him the opportunity to play both football and basketball at the next level. Alabama begin to get some major momentum with McKinstry when they got him on campus for Junior Day in March and were able to offer him the opportunity to play football and basketball.

The 5-Star recruit said communicating with Alabama’s basketball staff really stood out during that visit.

“The visit went well,” McKinstry said, “The biggest takeaway was my talks with the basketball team.”

The Crimson Tide continued to make McKinstry feel like a priority alongside Alabama basketball and Nate Oats. The Pinson Valley product told Touchdown Alabama in August, Nate Oats was in contact with him constantly.

“It has been good contact,” McKinstry said. “We talk once a week and some time even more than that. It is a good conversation. He talks about getting me there.”

As the global COVID-19 pandemic impacted college football recruiting, McKinstry continued to work through his recruitment. He dropped a top 5 in May, which was cut down to a top three of Alabama, LSU and Auburn in July. All three programs would battle it out for the next couple of months with each of them looking as if they were the leader at one point.

The pendulum begin to swing in Alabama’s favor once again when the 2020 football season kicked off. LSU and Auburn got off to very shaky starts while Alabama powered through. Not only the Tide continue to win, they showed a willingness to start true-freshman, including Malachi Moore, who is close friends with McKinstry. Upon finding out Alabama was starting Moore, McKinstry told Touchdown Alabama he was going to give Alabama a deeper look.

“That is big,” McKinstry said. “I have seen him go to work, I have worked out with him. All that hard work he put in is really paying off, for real. That makes me look at them more.  I am excited to see myself.”

Alabama will most likely used McKinstry as a cornerback. At 6-0 and 185 pounds, the elusive playmaker has the ability to play on the offensive side of the football and be a threat in the return game on special teams.

There are still plenty of other targets still on the board for Alabama with McKinstry’s pledge locked in.