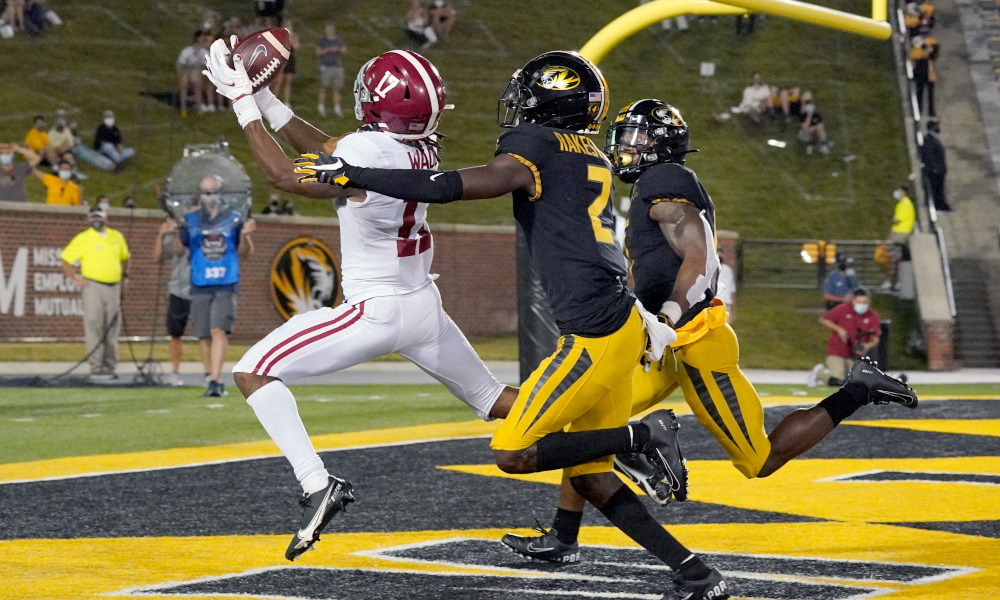 As the college football season continues, NFL Draft pundits are getting their boards ready for next April.

Mel Kiper Jr., one of the most respect draft experts at ESPN, has his projections in order.

On Thursday, he shared his top-five running backs and top-10 wide receivers via Twitter.

When it comes to the University of Alabama, Kiper had Najee Harris as his top back and DeVonta Smith at No. 1 for receivers.

Despite not playing versus LSU this weekend — COVID concerns — Harris chimes in with 714 yards and 14 touchdowns on 124 carries. He is averaging 119 yards per game and is 500 yards away from tying former Crimson Tide standout and 2015 Heisman Trophy winner, Derrick Henry, for most rushing yards in school history.

Here are my top five running backs for the 2021 NFL draft. Penn State’s Journey Brown was ranked No. 4, but he is retiring from football. https://t.co/tYtg1eXmFh pic.twitter.com/w4FKLjwLjU

OK, here are my top 10 wide receivers in a loaded class. Six WRs are ranked in my top 25 overall. https://t.co/tYtg1eXmFh pic.twitter.com/RbJi6laGNx

Smith carries the Tide in receiving with 56 catches for 759 yards and eight scores. He is averaging 126.5 yards/game and is tied with Amari Cooper for most career touchdowns (31).

The 6-foot-1, 175-pounder is fifth all-time for career receptions (174) and third for yards (2,868). Smith is one of multiple candidates in the running for the Fred Biletnikoff Award.

Regardless of a season-ending ankle injury, Jaylen Waddle is No. 3 at receiver on Kiper’s board.

RELATED: Three potential suitors for Alabama to schedule this week, if it’s not too late

Prior to the mishap versus Tennessee, he was having a strong junior year. Waddle has 557 yards receiving and four touchdowns on 25 catches. He was averaging 111.4 yards per contest before the game against the Volunteers.

With the Tide preparing to face Kentucky next week, it is good to see some players high on draft boards.

﻿
Three potential suitors for Alabama to schedule this week, if it’s not too late
To Top
%d bloggers like this: