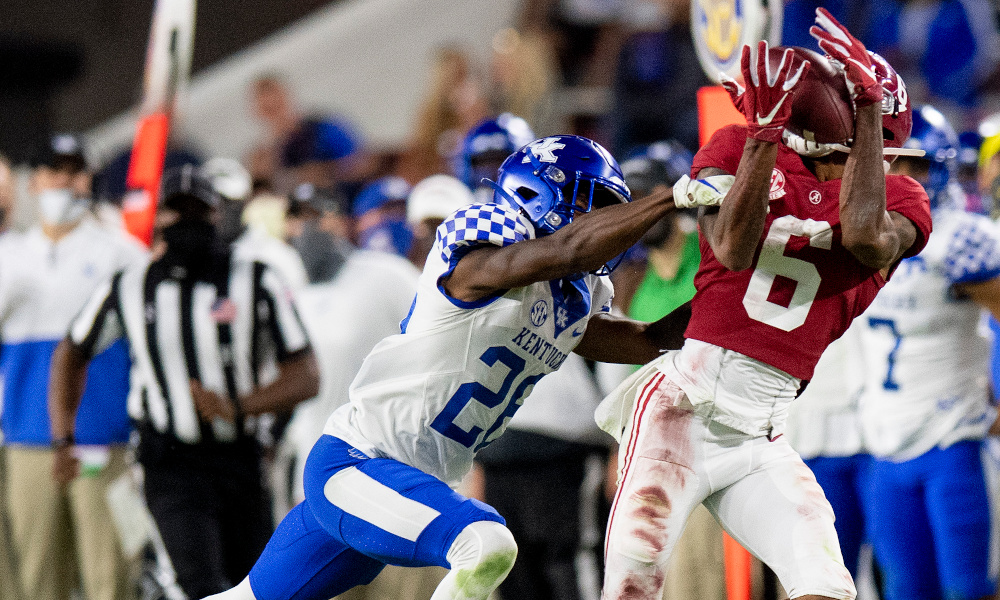 All he does is stretch the field, and he has done it effortlessly through four years at Alabama.

DeVonta Smith may have received his biggest recognition for his 41-yard, game-winning touchdown reception from Tua Tagovailoa on “2nd and 26” versus Georgia in the 2018 College Football Playoff National Championship matchup; however, he has not let it become the lone moment to define him. After three scores as a freshman in 2017, the Louisiana native has totaled 30 more in the last three years — becoming the Crimson Tide’s all-time career leader for touchdown catches (33) and the Southeastern Conference’s all-time leader in this category. He surpassed former Tide standout, Amari Cooper during last week’s matchup versus Kentucky. Smith had nine catches for 144 yards and two scores, including one from Bryce Young.

The record is an impressive one for Smith, but the way he accomplished it is more compelling.

According to a graphic from Pro Football Focus, the senior has averaged 29.4 yards per catch on his 33 touchdowns.

DeVonta Smith has averaged 29.4 yards per catch on his 33 career TDs🚀 pic.twitter.com/1MWSVFBM2U

When one takes the number into consideration, it is insane to think on the amount of scores Smith has in excess of 20-plus yards at wide receiver. Since his freshman campaign, he has recorded 18 touchdown receptions of 20 yards or more.

Only three of Smith’s scores have come on plays less than 10 yards.

He has seven career games with multiple touchdown catches, including five scores versus Ole Miss (2019) and four touchdowns against Mississippi State (2020). The 6-foot-1, 175-pounder is having another incredible year, as he is about to achieve a second straight 1,000-yard campaign. He led the Crimson Tide in 2019 for receiving yards (1,256) and scores (14).

Currently, Smith has 65 catches for 903 yards and 10 touchdowns.