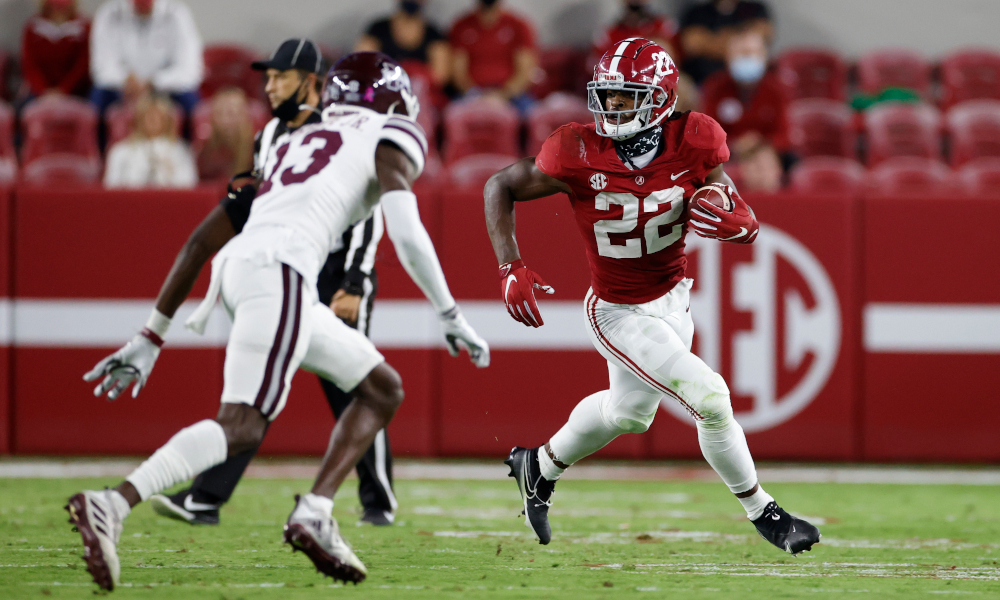 In his development at the University of Alabama, Najee Harris has become more than an athlete.

He has grown to be a role model and an advocate for the Tuscaloosa community.

As a senior from California, the once five-star recruit has been chosen as a finalist for the fourth annual Jason Witten Collegiate Man of the Year award. Named after University of Tennessee alum and a 16-year NFL veteran, Jason Witten, the Collegiate Man of the Year honor goes to the student-athlete who has demonstrated a record of leadership by exhibiting exceptional courage, integrity and sportsmanship both on and off the field.

The award also honors the type of exemplary character and commitment to community, family and teammates that Witten displayed throughout his career.

When he is not focused on academics, Harris is a fixture of the community in recording 50 hours of community service.

His work as a volunteer with the Alberta Head Start Unity Project, where he serves as a positive role model for children, is something he holds to his heart. During the summer, Harris established himself as a voice in the Crimson Tide’s social justice movement on campus and is the main voice behind the University’s push toward being a more unified campus.

On the field, he has had an incredible season.

He’s totaled back-to-back 1,000-yard rushing campaigns, while having four 100-yard rushing performances. His output for rushing scores is second all-time to Derrick Henry (28) in school history for a single season. Harris has 42 career rushing touchdowns, which ties him for first all-time with Henry and Mark Ingram. The 6-foot-2, 230-pounder stands at 3,461 career rushing yards, which is third all-time in Tide history.

Along with the Collegiate Man of Year honor, Harris is also one of 14 student-athletes names to the SEC Football Community Service Team for his work. An announcement came on Thursday morning from the SEC’s front office in Birmingham, Ala.