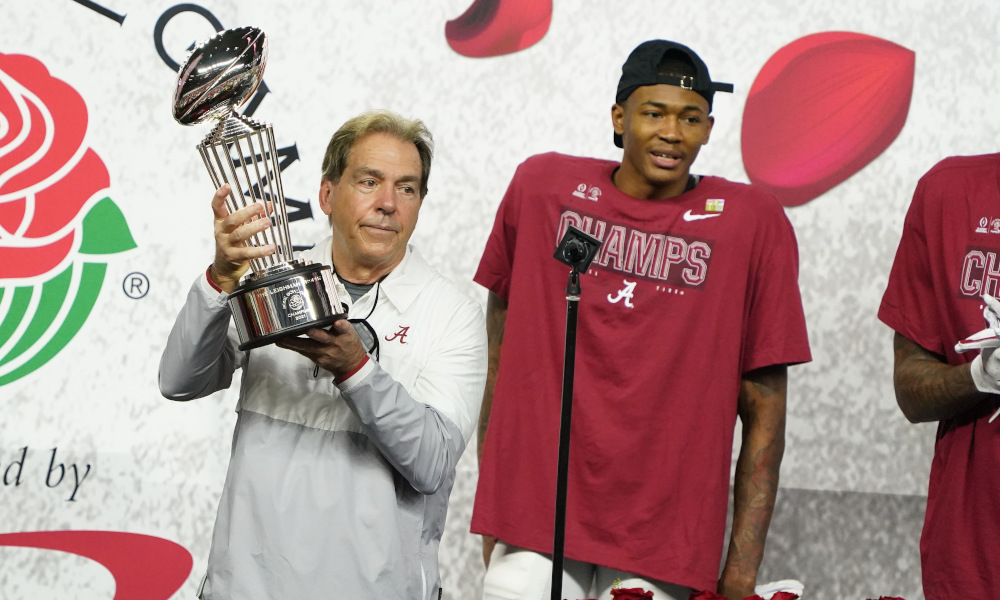 A lot of Alabama football fans where very unhappy about the news of Steve Sarkisian (offensive coordinator) accepting the head coaching position at the University of Texas, especially with the College Football Playoff National Championship Game next week versus Ohio State.

The timing of the situation was horrible, but Nick Saban has always been one that can adapt to anything.

During championship games where he has had a top assistant or primary coordinator take another coaching job, Saban has been successful in winning those matchups on a couple of occasions. In reflecting back to the 2015 season, Kirby Smart was the most coveted assistant on Saban’s staff. Despite the success of Lane Kiffin at offensive coordinator, different schools were targeting Smart for head coaching jobs — including the University of Georgia.

He accepted the offer from his Alma mater, but coached the Crimson Tide’s defense in the 2016 CFP National Championship Game.

Alabama earned a 45-40 win in its first meeting against William “Dabo” Swinney and the Clemson Tigers, and Smart would later transition to his new assignment with the Bulldogs.

Jeremy Pruitt, a former defensive coordinator at Alabama, had the same story in 2017.

He coached a defense that pitched two shutouts and allowed just 11.9 points per game.

Before assuming his role as the head man at the University of Tennessee, Pruitt helped the Tide achieve a 26-23 win over Georgia in the 2018 CFP national title game.

Saban suffered a loss in his second championship showdown with Clemson, but his primary coordinator (Kiffin) was fired one week before the matchup. The move to part ways from Kiffin did create a distraction; however, this was not something where he left on his own accord.

Saban’s second defeat in a championship moment came with Michael Locksley as the primary assistant.

Locksley accepted a head coaching job at Maryland on Dec. 4, 2018 and five weeks later, he coached in the 2019 CFP National Championship Game (Jan. 7, 2019) against Clemson. With a true freshman in Trevor Lawrence at quarterback, the Tigers proved to be a much better team and captured a 44-16 blowout win over Alabama.

If one removes Kiffin’s firing, Saban is 2-1 in these situations.

RELATED: Will the news of Steve Sarkisian taking the Texas job be a massive distraction for Alabama?

Even with the professionalism of Sarkisian, Saban will not let the Texas news be a distraction.

He is one victory away from coaching his second perfect team in 14 years. He is also one win away from national championship No. 7, which would put him over Paul W. “Bear” Bryant for most all-time by any head coach in college football.

Saban owes revenge to a couple of teams and Ohio State is one of those programs. Under the leadership of Urban Meyer, the Buckeyes defeated Saban and the Tide in the first-ever CFP semifinal matchup at the Allstate Sugar Bowl.

Ohio State grabbed a 42-35 victory and won the first CFP national title. Coach Saban has not forgotten the loss. Expect to see much intensity throughout practice in preparing for Jan. 11.