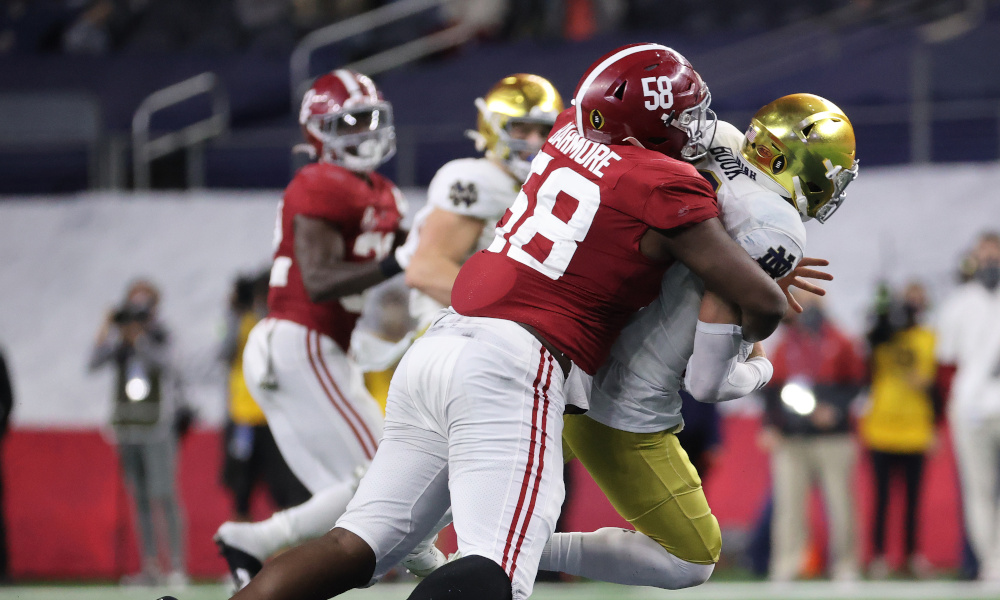 Of the in-game matchups between Alabama and Ohio State, the battle in the trenches is the most important one.

For the Buckeyes, its defensive front will face a Joe Moore Award-winning offensive line in the Crimson Tide. As for Ohio State’s offensive unit, it will be at war against a pass rush for Alabama that is clicking at the right time. Although he is expected to be at quarterback for the Buckeyes next week, Justin Fields took a hard hit in the Allstate Sugar Bowl versus Clemson.

RELATED: Alabama’s Malachi Moore ‘should be ready to go’ for CFP title game, according to Patrick Surtain II

He toughed it out and had the game of his life — 385 passing yards, six touchdowns — but is he able to duplicate the same performance on a Nick Saban-coached defense? This is a thought from media pundits and fans of Ohio State, especially with its recent national championship coming in 2014. Alabama saw Fields only one time in the 2018 SEC Championship Game, where he came off the bench for Georgia as a freshman to execute a fake punt. The play did not go according to plan, the Tide ended up getting a victory, and Fields would transfer to Ohio State.

Since then, the native Georgian and former five-star has blossomed into an incredible quarterback.

Regardless of how dynamic he is, Ohio State’s offensive line has encountered struggles in protecting Fields within the pocket.

He’s been sacked 20 times and in close matchups versus Indiana and Northwestern (Big Ten Championship), Fields was sacked a combined eight times and tossed five interceptions.

Barmore and William Anderson (freshman) share the team lead and SEC lead for sacks with seven, while the Philadelphia (Pa.) native also has 7.5 tackles for loss and six quarterback hurries on the season. The 6-foot-5, 310-pounder was named first-team All-SEC for his efforts and according to Pro Football Focus, he pressured Ian Book of Notre Dame on 18.4 percent of his pass-rush snaps. Barmore’s output in this category is the highest by any player in the CFP this season.

Highest of any player in the #CFBPlayoff pic.twitter.com/3IDRPCI9wr

On top of that, PFF has Barmore with the most quarterback pressures by a Power Five defensive tackle.

Most QB pressures by P5 DTs:

When he was asked about Barmore’s switch as a pass rusher, DJ Dale told reporters that his teammate has a special mindset.

Ohio State will have its hands full with No. 58 coming with bad intentions.