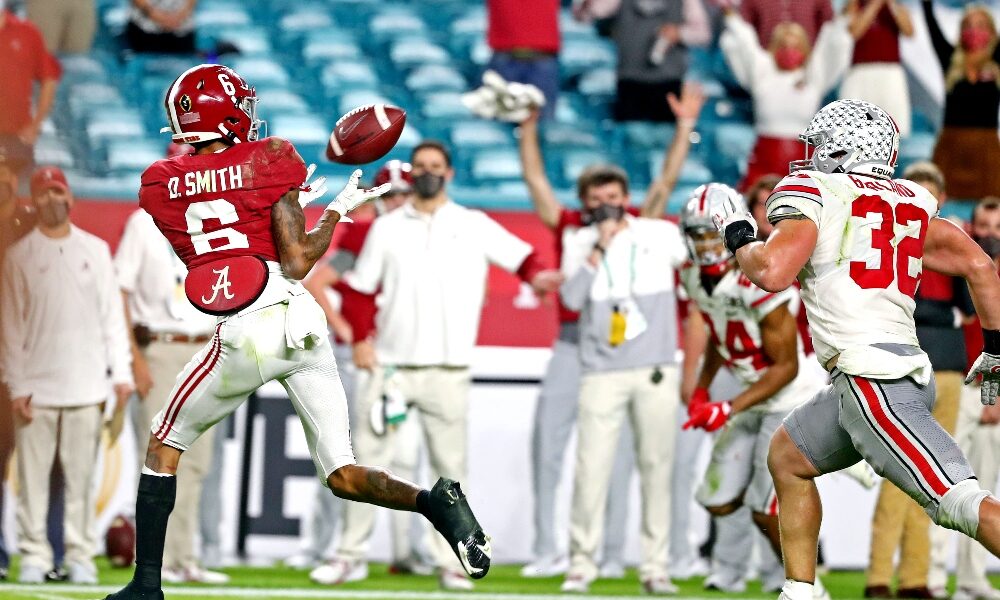 Millions of eyes were drawn to Monday’s national championship game between Alabama and Ohio State. Two of the greatest traditions in all of college athletics squaring off for the game’s biggest prize is enough to get fans intrigued in the game.

But what kept people glued to the TV was the superb performance from Crimson Tide wide receiver DeVonta Smith.

He put on an absolute show against the Buckeyes and even caught the attention of some of the biggest names in all of sports.

Check out the best reactions to Smith’s game below.

DeVonte Smith is one of the best pure receivers I’ve ever watched! Like a mix between Reggie Wayne and Marvin Harrison. Man he’s good!

Seriously, if DeVonta Smith can stay healthy, he has the tangibles and intangibles to be Jerry Rice.

From now on if u misspell my name make sure it’s Devonta cuz he that boy.

For some reason @DeVontaSmith_6 doesn’t have a blue check mark.

I volunteer to verify him.

DeVonta Smith just needs to go relax heal up and get ready for these team visits/interviews.
Don’t care about his 40, shuttle,
3-cone and damn sure don’t care about his bench lol.
There is nothing physically that he needs to prove to any Coach, Scout or GM.

Whoever draft Devonta Smith is going to get a special player man!

Although he is shorter and weighs less, DeVonta Smith reminds me of Al Toon (old head comparison).