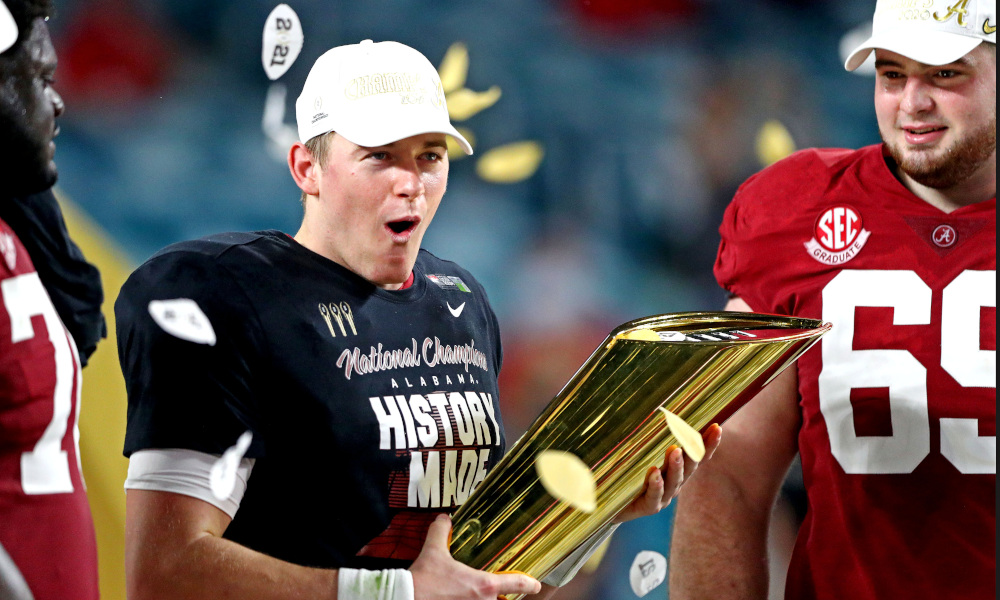 His name will be written in the annals of great quarterbacks for Alabama football.

When the clock hit all zeros on Monday night at Hard Rock Stadium, Mac Jones had the biggest smile on his face as he accomplished a dream he had for himself. He faced a dual-threat signal caller in Justin Fields and outplayed him, to deliver the Crimson Tide to a 52-24 win over Ohio State. The redshirt junior brought a smile and tears to the face of Nick Saban, as he helped his head coach earn his seventh national championship. While his coach stands alone as the greatest ever in college football, the former three-star recruit set a College Football Playoff National Championship record. Jones was responsible for 464 passing yards, which is one yard more than what Joe Burrow of LSU (463) had in the 2020 CFP National Championship matchup.

The 6-foot-3, 214-pounder tossed for five touchdowns, tying Burrow’s mark from the showdown versus Clemson.

He also completed 36 passes — on 45 attempts — which tied Deshaun Watson’s output from the 2017 CFP title game.

Jones completed 80 percent of his throws and paced the Tide to 621 yards offensively.

Alabama scored on all six of its red zone tries and when he came off the field for a final time, Jones received a well-deserved ovation from the fans.

In showing he is worth a first-round NFL Draft grade, Jones engineered two touchdown drives in the second half without DeVonta Smith.

The talented wide receiver and 2020 Heisman winner dislocated his finger in the third quarter and did not return to the game. Jones found Slade Bolden for a touchdown and Najee Harris ended the other drive with a score.

Despite all the great Alabama teams that have come through the program and other SEC schools that have won national championships, Jones confidently stated the 2020 group is the greatest to ever suit up on the field.

“I think we’re the best team to ever play,” Jones said after the game. “There is no team that will ever play an SEC schedule like that again.”

He was the leader behind the team going undefeated in the SEC and then dominating the postseason.

Jones guided an offense that averaged 48.2 points per game, which is the most in SEC history.

He gives Coach Saban his second perfect team to put with 2009 and with his focus, he navigated what will be regarded as one of the best teams ever in college football.

He was dominant from the start of the season to the end, as Jones is the second quarterback (Tua Tagovailoa, 43) of the Saban era to account for 40 touchdown passes in a single season. Sometimes, one has to show the doubters it means business.

Jones did it for Alabama in the 2020 football season.