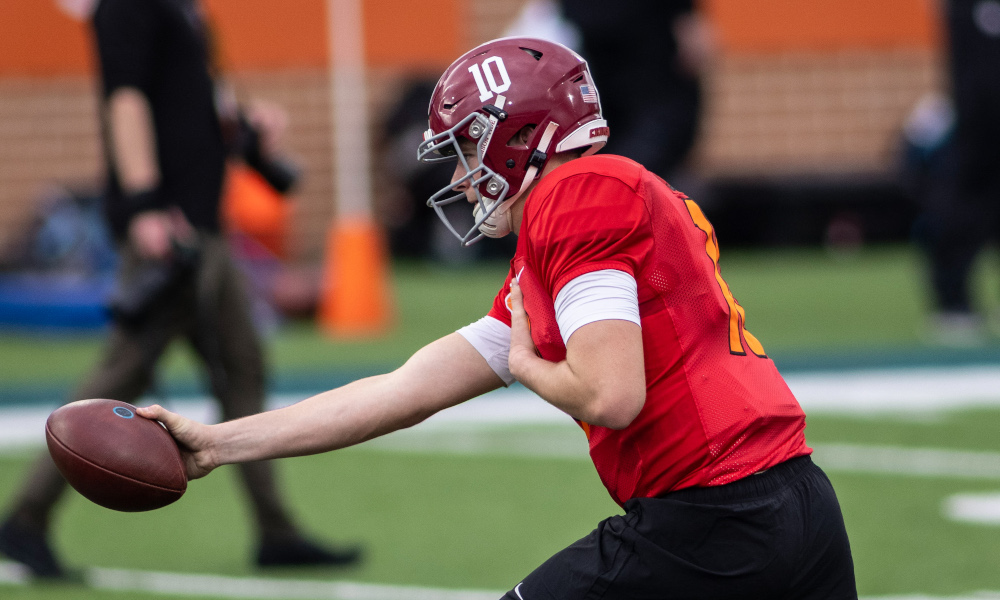 He rolled his left ankle in Thursday’s practice, but the competitor in him won’t let him sit out.

Mac Jones did not rule out the possibility of him playing in the Senior Bowl; however, he did mention that his availability will depend on how he feels. According to Jim Nagy, the Senior Bowl’s executive director, he told WNSP-FM 105.5 in Mobile that all indications point toward Jones playing on Saturday. Before hurting his ankle, the former Alabama quarterback had put together a strong week.

RELATED: Mac Jones hurts his ankle at Senior Bowl practice, may not play on Saturday

“He came up hobbled a little bit with the ankle yesterday,” Nagy said. “He had that leg taped for the national championship game, but I think Mac’s going to be alright.”

While Jones is expected to play, his former Alabama teammates — DeVonta Smith, Najee Harris, and Landon Dickerson — will not be participating. Smith suffered a thumb injury in the national title game, Dickerson sustained a knee injury in the SEC Championship, and Harris has been bothered by an ankle injury. Harris participated the most during the week of practice and was praised for his efforts.

He and Smith project as first-rounders for the NFL Draft and Dickerson has second-round value.

Throughout the week, Jones has had every major analyst, expert, talent evaluator, scout, and media pundit amazed with his accuracy, ball placement, leadership, and overall command of the offense. People are seriously considering him as a concrete first-round NFL Draft pick

After tossing for 4,500 yards and 41 touchdowns in his lone season as the Crimson Tide’s starting quarterback, the 2020 Heisman finalist is prepared to be a star at the next level.

NFL Network will air the exhibition at 1:30 p.m. CT from Hancock Whitney Stadium.