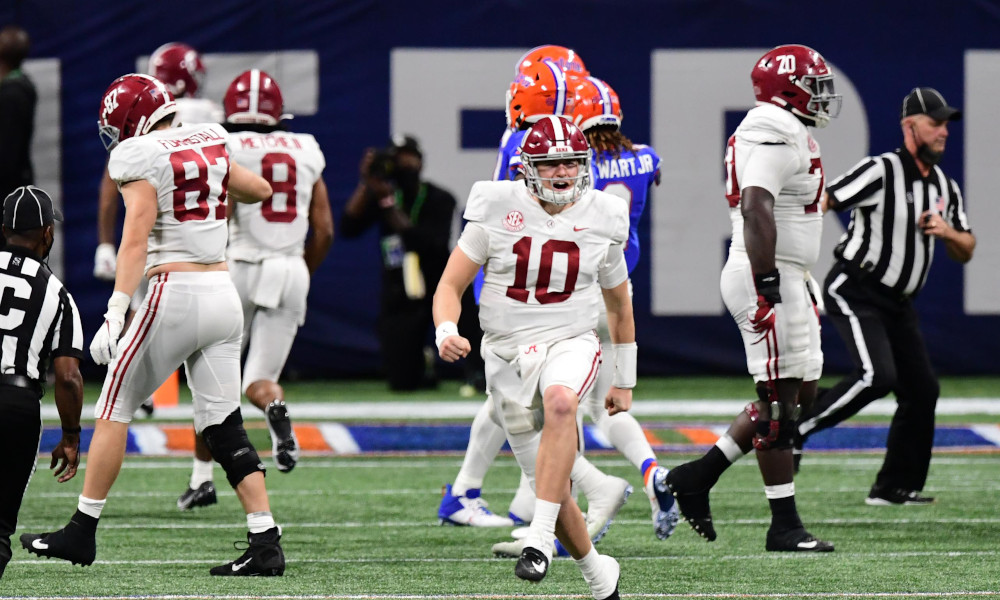 Mac Jones and Matt Rhule hit it off at the Reese’s Senior Bowl.

The former University of Alabama quarterback and head coach of the Carolina Panthers worked well together on the American team in Mobile (Ala.) last week. Rhule referred to Jones as an ‘alpha’ on offense and the rising second-year NFL coach saw a signal-caller that possesses the accuracy, ball placement, leadership, work ethic, and chemistry with each receiver on the field.

For his efforts in the week of practice, Jones was named the top American team quarterback.

A tweaked ankle kept him from playing in the game; however, he had done enough to impress pro teams. Jones had everyone singing his praises at the event and after turning in a record-setting season for the Crimson Tide, one former NFL executive sees the native Floridian going high in the first round of the upcoming NFL Draft.

Who helped improve their stock the most at the @seniorbowl?

“I don’t think he will go lower than eight,” Tannenbaum said of Jones.

“You can look at the body language between him and Matt Rhule, and look at the year Mac Jones had. He had 41 touchdowns, four interceptions, completed 77 percent of his passes, and he had a lot less weapons. When you go back a year ago, Tua had four No. 1 picks with Jerry Jeudy, [Henry] Ruggs, DeVonta Smith, and Jaylen Waddle. This year, Waddle gets hurt. All he has is DeVonta Smith and I thought Mac Jones when we talk about guys like Justin Herbert and Daniel Jones, players that helped themselves at the Senior Bowl, I think Jones is going to be a big part of that narrative moving forward.”

Carolina has the eighth pick in the draft. The quarterback position is a need for the team.

With its offensive weapons and Joe Brady calling the plays, the Panthers are missing a trigger man to take it to the next level.

He guided the Crimson Tide to a College Football Playoff National Championship in 2020, but Tannenbaum feels that Jones is perfect for Carolina in the National Football League.