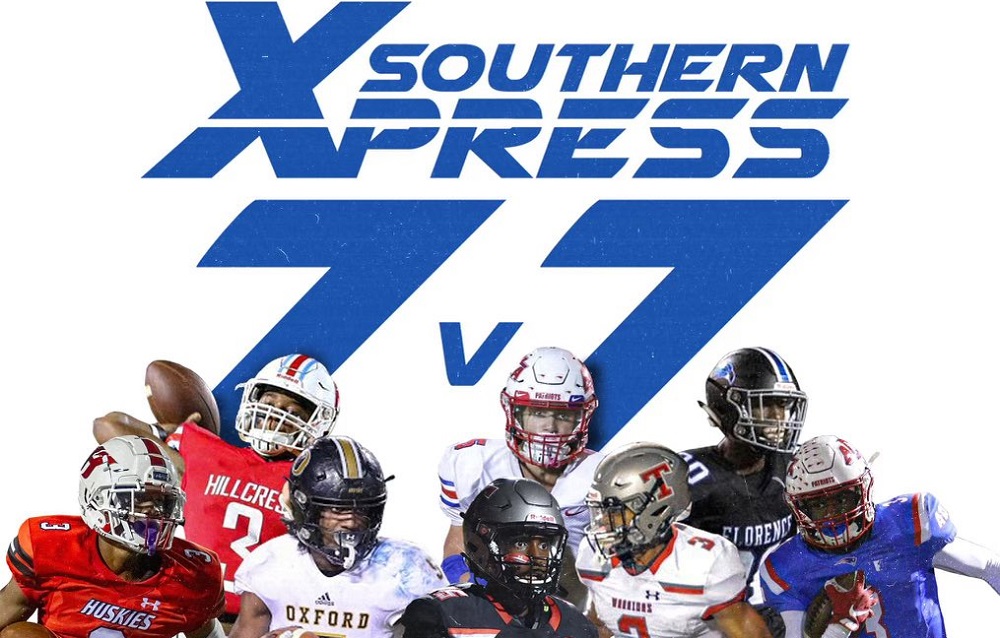 Southern Xpress is set and ready to host its 5th annual Border War 7-on-7 tournament Saturday in Alabaster, Alabama. Several Alabama football targets are expected to be in action along with multiple highly-recruited athletes.

The Tide’s 2022 four-star athlete target, Omari Kelly leads a loaded Southern Xpress team, which includes Alabama’s 2023 defensive back target, Jahlil Hurley. They will be joined by rising 2023 defensive backs, Sylvester Smith and Ethan Nation. Smith received his 7th and 8th offers from Georgia and Oklahoma this week, and Nation is closing in on 30 D1 offers.

Ethan Crawford will play quarterback for Southern Xpress. Crawford has early offers from Maryland and Kentucky. 2024 defensive back, Jayden Coleman rounds out this group. Coleman holds an Indiana offer.

The opposing squads are also filled with talent.

Fellow Alabama-based programs, D1 Elite Oxford and Gulf Coast Athletics, will be included in this field. Alabama’s four-star defensive back target, Trequon Fegans will lead D1 Elite alongside his younger brother Anquon Fegans, who has an offer from Georgia. One of the top athletes in the 2024 class, Ronnie Royal III will showcase his talent for Gulf Coast Athletics.

RELATED: Ronnie Royal III is the next big thing out of Alabama

Barrion Brown, a 2022 wide receiver who received an offer from Alabama in January, will represent the Adidas Dream Team. He will be joined by 6-foot-6 and 215 pound 2022 tight end, Karson Gay, who has offers from Tennessee, Arkansas and many other D1 programs. The Dream Team will have two future D1 tight ends on their roster this weekend as 2023 tight end, Ty Lockwood will also play in the event. Lockwood has nine D1 offers, including offers from Ole Miss, Tennessee and Penn State.

That is just the tip of the iceberg for the Dream Team. They will also have Dillon Bell, a 2022 wide receiver with offers from Mississippi State, Baylor and others, in action. Destin Wade will be slinging the rock for the Dream Team. Wade has Penn State, Kentucky and Tennessee in his top nine. 2023 athlete, Micah Bell caps off this group.

The Pro Process Academy out of Tennessee will also be represented. Their squad will be lead by Michigan’s four-Star ATH commit, Kody Jones and Florida State’s four-star wide receiver commit, Quincy McAdoo. Jarnorris Hopson, a rising 2022 wide receiver prospect, will anchor this group. Hopson has pulled in six offers since December.

A young Tennessee Prime squad will participate in this year’s event. Alabama’s 2023 wide receiver target, Adarius Redmond will be one of the top athletes on this squad. DeSean Bishop, a fellow 2023 athlete, will play alongside Redmond. Bishop has offers from Tulane and Eastern Kentucky.

Premier Pensacola and AGR Atlanta round out this field. The action gets started at 9 a.m. at 1921 Warrior Parkway in Alabaster, Alabama.