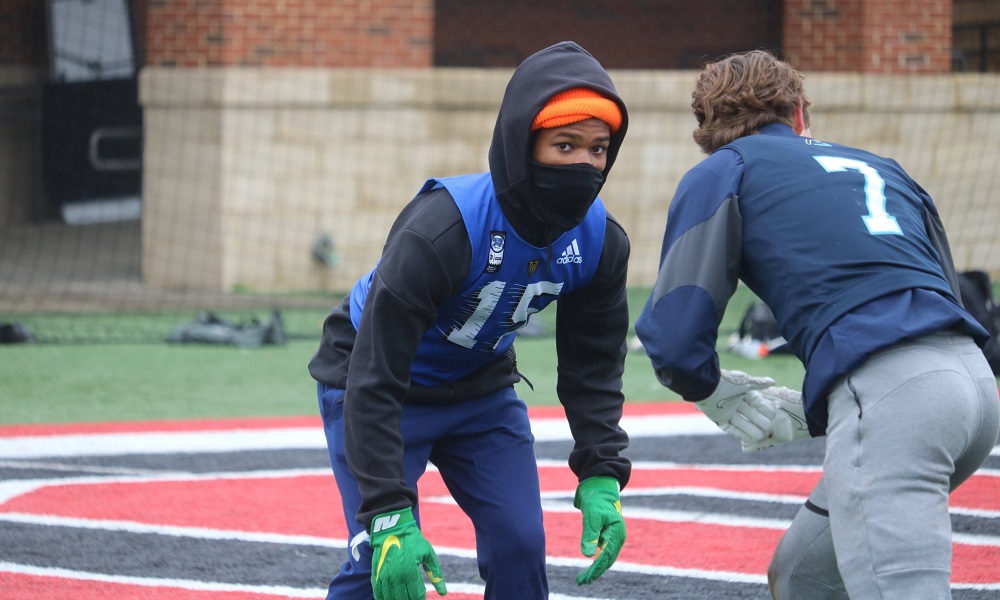 Southern Xpress hosted its 5th annual Border war 7-on-7 tournament Saturday, and it did not disappoint.

An abundance of talent competed in this year’s event and multiple prospects stood out. The top performer was arguably Southern Xpress 2023 defensive back, Ethan Nation. Nation showed why he is closing in on 30 offers and why he is going to be one of the most sought-after cornerbacks in the 2023 class. He did not give up a single pass in coverage and wide receivers struggled to create  separation against him.

Nation also shined on the offensive side of the ball by pulling in multiple touchdowns. Alabama has not offered Nation yet, but he is a kid to keep an eye on. Behind nation, a pair of Alabama wide receiver targets showed what they can do. Omari Kelly, a 4-Star recruit out of Hewitt-Trussville High School, put his impressive route running skills on display for Southern Xpress. The Alabama target was also able to show that he could stretch the field and take the top off a defense.

Barion Brown was another Alabama target who impressed. Brown’s ability to create separation at the line of scrimmage and make plays after the catch stood out for the Adidas Dream Team.

2022 4-Star ATH, Barion Brown @BarionBrown is another athletic prospect Alabama likes at wide receiver. He was one of the top performers at the Southern Xpress Border War tournament today.

Update on Alabama's push for him coming to @TDAlabamaMag. pic.twitter.com/AksOh9rJsy

Trequon Fegans, a four-star defensive back with an Alabama offer, was able to make some plays on the offensive and defensive side of the football for D1 Elite. He showed great instincts as a couple of his touchdown receptions were a result of tipped passes.

Another 2023 prospect who stood out was Jarnorris Hopson out of Mississippi. Hopson was able to get behind the defense and pull in multiple passing touchdowns for PPA. 2024 in-state athlete, Ronnie Royal III, was also able to show flashes of what he can do for Gulf Coast Athletics. There is no denying that Royal is an athletic prospect with blazing speed. Neither Hopson or Royal hold an Alabama offer, but they have other offers and could be on the Tide’s radar soon.

2024 ATH @Ronnie_Royal3x displaying some of his breakaway speed today. @TDAlabamaMag

Stand by him being the next big thing out of the state of Alabama.https://t.co/DXtkcnues2 pic.twitter.com/DOnmDOXj3E

2023 tight end, Ty Lockwood also caught the eyes of many with his size alone. He was able to be a weapon in the red zone for the Adidas Dream Team. He currently holds offers from Texas A&M, Pen State and others. Lockwood is another name to know.