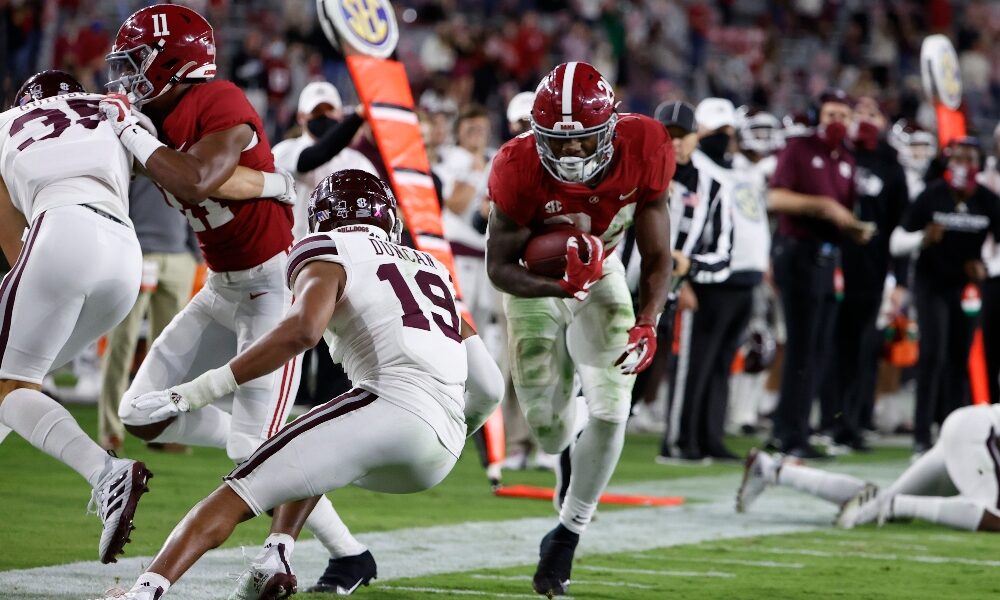 He arrived at the University of Alabama with one goal: win the Heisman Trophy.

Whether it was his five-star rating or overall talent, fans of the Crimson Tide were excited when Trey Sanders came into the 2019 recruiting class. A native of Port Saint Joe, Fla., Sanders participated in Nike’s “The Opening” Finals and U.S. Army All-American Bowl before coming to the Tide. He was a superstar running back at IMG Academy and had offers from nearly every major collegiate program, but he chose Alabama.

The 6-foot, 214-pounder has encountered a couple of setbacks in his career.

RELATED: Jay Valai makes it official with Alabama football on his social media

A foot injury kept him from playing as a freshman. Last year, a hip injury forced him to miss the rest of the 2020 campaign after playing in four games. He was involved in a car accident on Nov. 6 of last year and it left him with a few serious injuries.

Before the mishap, Sanders was starting to emerge as a runner. He got an opportunity to see action versus Mississippi State at Bryant-Denny Stadium and totaled 80 yards rushing on 12 carries. A few of his runs went for 20 or more yards, including a long run of 25 yards. Sanders assisted the Tide to a 41-0 victory and people thought his performance would launch into becoming an impact player. Since his surgery, he has cheered his teammates to an SEC Championship and a College Football Playoff National Championship. With the departure of Najee Harris to the NFL Draft, Sanders knows how important next season is for him.

According to Dr. Matt Rhea, Alabama’s Director of Performance Science, the former five-star has taken his rehab to the indoor practice facility and is working on playing in the fall.

Coach Jeremy Gsell, Alabama’s Director of Football Rehabilitation, had Sanders performed resisted marching drills last week. The purpose of the workout is to get his legs, hips, and core in line.

Love this guy! @6sixGod_ not cleared to run yet but doesn’t mean we can’t do some resisted marching to get ahead. Love having him back in with us. I appreciate how hard @gsell_jeremy works to get guys back training with their teammates as fast as possible. Keep working Trey! pic.twitter.com/ydgu2y1rRu

If he can produce great numbers, there is a chance Sanders can pursue the 2022 NFL Draft.