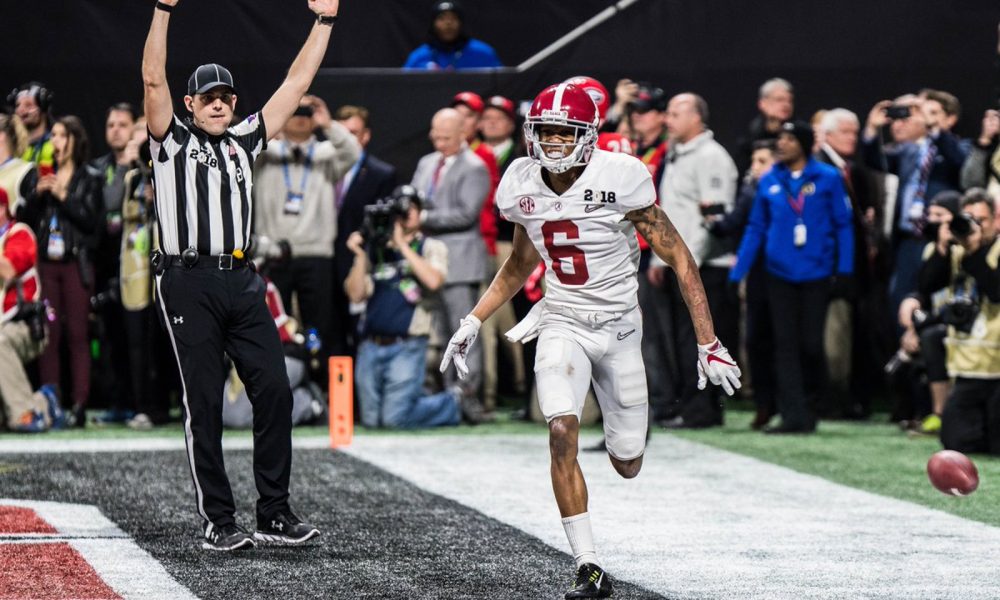 Today’s date captures a special moment in the history of Alabama football.

Nick Saban and the Crimson Tide faced the University of Georgia at Mercedes-Benz Stadium in Atlanta for the College Football Playoff National Championship to finish the 2017 season. Georgia dominated the first half and carried a 13-0 lead into halftime.

Jalen Hurts had success before the matchup; however, he struggled against the Bulldogs and Saban made a change in the second half.

He went with a true freshman in Tua Tagovailoa, and it changed the course of the game. Tagovailoa threw three touchdowns, including the game-winner in overtime, to deliver the Tide to a 26-23 victory. It was an incredible play but was “2nd and 26” the great play in Alabama football history? In honor of the moment, yours truly of Touchdown Alabama Magazine ranks the top-five plays of all-time for the Tide.

Alabama was looking at back-to-back national championships in the 2012 season.

After it defeated LSU in the 2012 BCS National Championship Game, AJ McCarron and the offense were at Tiger Stadium (Baton Rouge, La.) for the regular season matchup. Despite the Tide holding a 14-3 lead for much of the game, Zach Mettenberger carried the Tigers to a pair of touchdown drives — including a toss to Jarvis Landry for a score in the fourth quarter.

Coach Saban put the matchup in McCarron’s hands, as the Tide started from its own 28-yard line. He guided Alabama on a 72-yard drive in five plays that included three completions to Kevin Norwood. On second down, Doug Nussmeier dialed up a screen pass to T.J. Yeldon.

The talented running back followed his blockers, made a defender miss, and ran into the end zone for a 28-yard touchdown. Alabama’s sideline went nuts, and Tiger fans were silenced.

In his third season, he coached the Tide to an undefeated regular season and a win over the University of Florida in the inaugural SEC Championship Game. Alabama was ranked No. 2 in the nation when it faced the top-ranked Miami Hurricanes in the 1993 Sugar Bowl for a national championship. Miami was regarded as the team with the firepower; however, the Tide’s defense stifled it. Alabama forced four turnovers, including three interceptions off Gino Torretta. George Teague returned one of Torretta’s mistakes for a touchdown.

Regardless of Alabama’s offensive struggles, Teague had one of the greatest plays in school history.

During the second half, Torretta found Lamar Thomas on a big play.

Thomas was the fastest man on the field and it felt like he was going to score. Teague ran him down, stripped the ball from him, and proceeded in the opposite direction. Keith Jackson’s famous call, “Teague took the ball away from him. Teague’s got the ball,” had Tide fans jumping for joy. A penalty negated the play, but Teague’s effort took all the energy from the Hurricanes.

Will Reichard made a 52-yard field goal versus Georgia in 2020 for Alabama, but Van Tiffin is the originator for making clutch kicks with games on the line.

RELATED: Najee Harris hilariously describes the biggest surprise for him at Alabama: “I didn’t know the fans would be that damn crazy.”

He waited for Mike Shula to put him in a position to be the hero of the 1985 Iron Bowl. Auburn held a 23-22 lead in the final minute of the fourth quarter, and the Tide started its drive on its 20-yard line. After completing passes to Gene Jelks and Greg Richardson Jr., Shula provided Tiffin with a chance at a game-winning field goal.

He missed earlier from 52 yards, but Tiffin did not let it happen again. He drilled the kick into the breeze and gave the Tide a 25-23 victory at Legion Field in Birmingham, Ala.

Alabama went on to defeat the USC Trojans in the Aloha Bowl and finished the year at 9-2.

Mark Ingram was the focal point of Alabama’s offense in 2009, especially versus Ole Miss and South Carolina.

Greg McElroy had a rough couple of weeks in the passing game, and it continued against Tennessee. Ingram had near 100 yards rushing, but McElroy completed 18-of-29 passes for 120 yards.

Fatigue had set in for the Tide; nevertheless, Leigh Tiffin was one of two heroes with four made kicks. The second impact player was on defense at nearly 400 pounds.

Terrence Cody blocked a Daniel Lincoln field goal earlier in the game, but his second play caused Bryant-Denny Stadium to erupt. He got his hand on a 44-yard attempt and sent it to the ground as time expired. Nick Saban jumped in the air on the kick being blocked, and Alabama carried the momentum into winning its first SEC title since 1992. Cody’s efforts also propelled the Tide to win a national title.

Tua Tagovailoa and DeVonta Smith came together on the most epic play in Alabama football history.

RELATED: Bryce Young has Johnny Manziel electricity and is ‘Russell Wilson on steroids’ according to California scout

Miami Dolphin fans want to see these two reunited in the pros. As true freshmen, both players snatched victory from defeat in the 2018 CFP National Championship Game. Saban’s choice to start Tagovailoa in the second half versus Georgia brought excitement to Alabama’s trio of young receivers. Henry Ruggs III started the comeback with a touchdown catch from Tagovailoa in the third quarter, but Smith ended the game as a fan favorite. The Bulldogs held a 23-20 lead in overtime after Rodrigo Blankenship made a 51-yard field goal in overtime. Tagovailoa took a sack on Alabama’s first possession, which forced Saban to become unglued on the sideline. In the following play, which happened on 2nd and 26, Saban’s emotions flipped 180 degrees in the other direction.

Tagovailoa found Smith down the sideline for a 41-yard, game-winning touchdown.

Alabama fans were euphoric, Saban ran onto the field with his hands in the air, and the players jumped on Smith.

Saban called it the happiest moment of his life, as he took a national title away from Kirby Smart.

The championship was the sixth of Saban’s tenure, tying him with Paul Bryant for most all-time in college football.