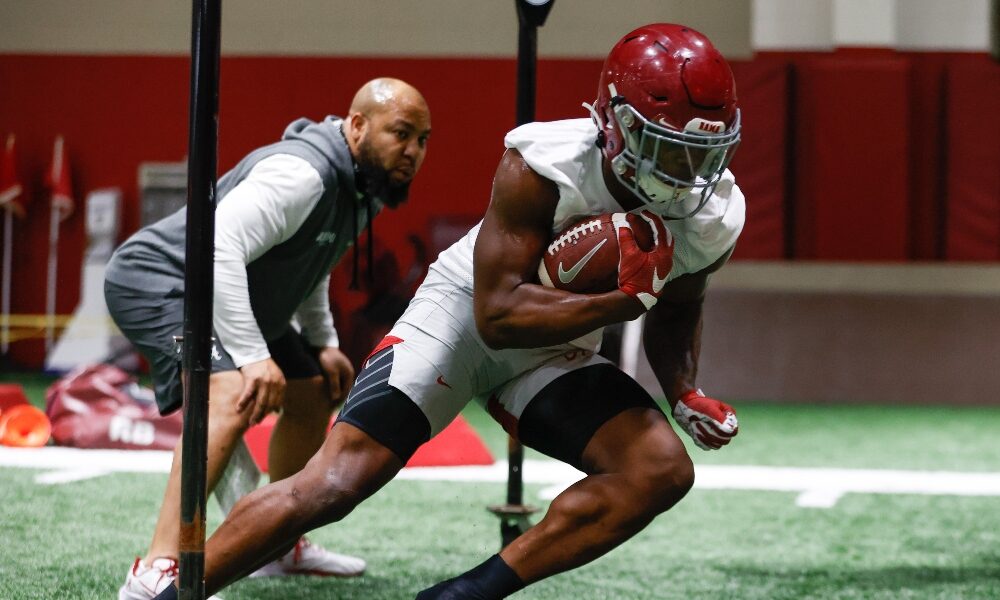 On Monday, the University of Alabama had Brian Robinson and Christian Harris available for media interviews.

Nine of his former teammates will participate in Tuesday’s pro day for the Crimson Tide, but Robinson decided to take advantage of a free fifth-year in college. In doing so, he returns as the primary running back for Alabama. The 6-foot-1, 228-pounder has shown quality production and has remained healthy throughout his career.

He is now looking to add the finishing touch to his tenure with the Tide. Last season, he totaled 483 yards rushing with six touchdowns on 91 carries — en route to a national title.

RELATED: Jalyn Armour-Davis locks on to an opportunity to pursue a starting role at cornerback for Alabama

Harris had a stellar sophomore campaign, but he is prepared for even more.

The 6-foot-2, 232-pound linebacker had 79 tackles, seven tackles for loss, 4.5 sacks, six quarterback hurries, two pass breakups, and one interception through 13 games in 2020.

Alabama is graduating a lot of leaders to the National Football League, but Robinson and Harris are making sure there is no ‘drop-off’ in leadership for the coming fall. Najee Harris departs, but Robinson knows the importance of carrying the running back room and he is prepared.

When asked about running backs’ coach, Robert Gillespie, the Tuscaloosa native said he has been ‘amazing.’ Gillespie takes over for the departed Charles Huff, who is at Marshall.

“He is a very exciting coach,” Robinson said of Gillespie. “He has a lot of great knowledge that can help us become better football players. I am excited to take on this year with Coach Gillespie. I know he will make me a better player every day, and he is going to challenge us to compete hard. I am excited for what’s to come in our running back with the addition of Coach Gillespie.”

Robinson also knows he is one of the oldest guys on the team. His leadership will be vital if the Tide wants to repeat as champions.

As for Harris, he is becoming more vocal to get the defensive assignments called across the formation.

RELATED: Chad Johnson “f-cking loves” DeVonta Smith and believes he has the “IT” factor to be special

He is focused on getting the defense better on second and third downs.

“There were a lot of times last year where it was third and two, third and three, and it’s a lot harder to convert on those,” Harris said. “We have to make it more difficult for teams on third downs and that will improve our success.”

Last week, Nick Saban said Harris will see action at “Mike” and “Will” linebacker next season.

The junior wants to build on the process that Dylan Moses and Joshua McMillon set for him. Coach Saban had a lot of good things to say after the first spring practice; however, he knows there is more work to be done.

So far, this group is locking in to run it back next season.