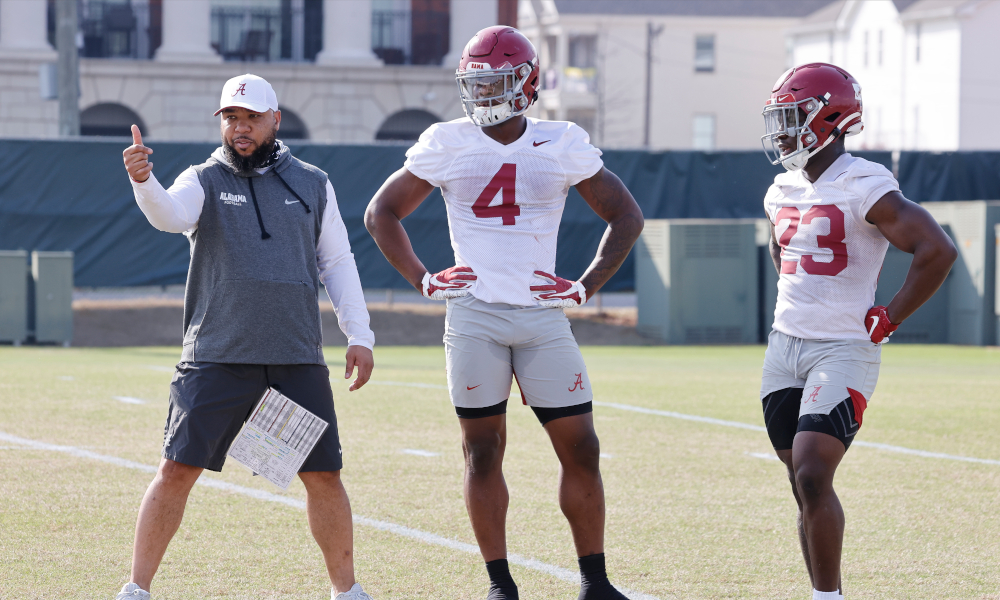 Najee Harris is gone, but Nick Saban is excited about the talent Alabama football has at running back.

Before it welcomes Camar Wheaton (five-star) in the summer, the Crimson Tide has Brian Robinson Jr., Keilan Robinson, Trey Sanders, Jase McClellan, Roydell Williams, and Kyle Edwards. Fans have not seen what Edwards is capable of, but they have witnessed the abilities of both Robinsons’, Sanders, McClellan, and Williams.

RELATED: Bryce Young ‘a little ahead’ of everyone else in Alabama’s QB room, according to Nick Saban

Whoever wins the quarterback job for the Tide will have a stable backfield to alleviate pressure from it.

On Wednesday, Coach Saban singled out Keilan Robinson and Brian Robinson in his presser.

The former missed all of last season because he opted out due to the COVID-19 pandemic, while the latter totaled 483 yards rushing with six touchdowns in 2020.

Per Saban, he is really pleased to have Keilan Robinson back.

“He is doing great,” Saban said. “He’s got great speed. He’s gotten bigger and stronger. He’s really playing fast. He’s playing really well on special teams. He is a potential kickoff returner for us. He did it before when he was a freshman, so that is certainly a role. He has made really great progress as a running back.”

During his freshman year in 2019, Robinson totaled 254 yards rushing with two scores on 39 carries. His touchdowns of 74 and 46 yards were the longest runs by any back on Alabama’s roster.

He has maintained his speed and added size, but Robinson can also catch passes out the backfield.

A native of Washington, D.C., the junior will be a consistent threat next fall for Alabama.

As for Brian Robinson, Saban said the fifth-year senior will have a ‘more significant’ role.

“When he did play last year, he played extremely well,” Saban said. “I was really pleased. He just did not play that much, and it was not his fault. Najee was one of those guys, the more he played, the more he ran the ball, the better he got. So, he really wasn’t one of those guys you wanted to take in and out of a game all the time. He would get on a roll. That affected B-Rob’s playing time a little bit, but it was not his fault. He had a great offseason program. He’s had a great three days of practice. He’s been a great leader.”

Saban stated Brian Robinson will show everything he can do in the fall.

The Tide has a stacked room at running back, and fans are hopeful it can keep everyone.