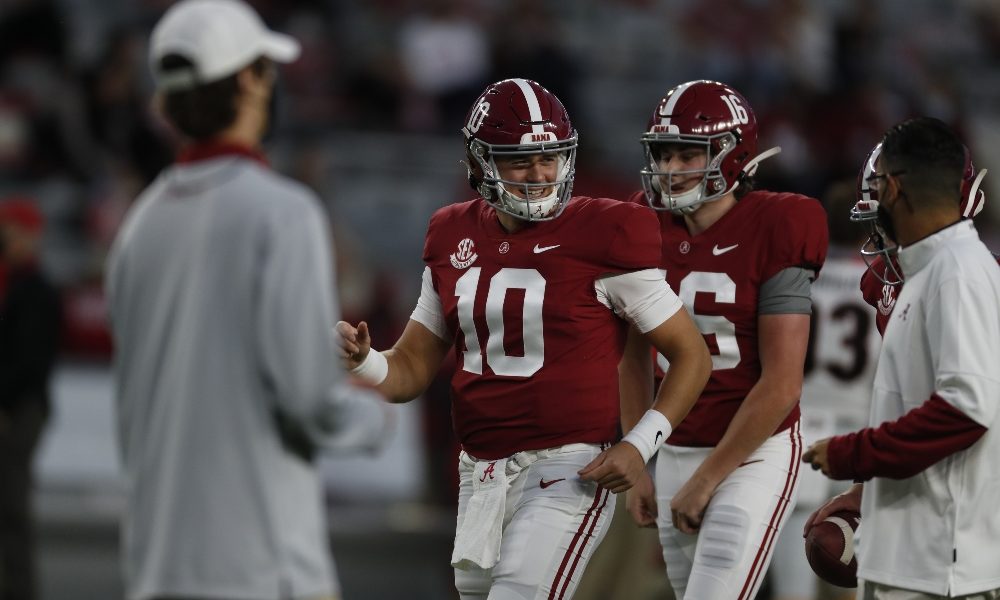 After a strong outing on Monday, Mac Jones’ successful start with the New England Patriots continued through the teams mandatory mini-camps on Tuesday.

The performance from Jones at the start of the week warranted an increase in reps during the teams passing drills.

Big storyline from today was the sizable increase in reps Mac Jones saw. Cam Newton continued to lead off, but Jones attempted the most passes in team drills.

The 15th overall pick in the draft is competing for the starting quarterback spot alongside Cam Newton. Despite the solid play from Jones, there won’t be any major changes at the conclusion of the team’s mini camps.

Head coach Bill Belichick has always used OTAs and mini-camps as much more as teaching sessions as opposed to periods of evaluation, but Jones has certainly made a name for himself in his brief time up north and has impressed his fellow quarterbacks as well.

“He’s pretty quiet,” Newton said to the media Tuesday as reported by Patriots Wire. “I think he’s trying to figure everybody out. I’ve been there. I’ve been a first-round pick where so much is asked from you. Coming from a situation where you have a lot of people that are your peers, and now, what is Mac? 21, 22? I’m 32 and (Brian Hoyer) is 35. It’s tough. He’s doing a great job with being everything as advertised with a leadership perspective. He’s holding himself accountable. That’s all you can ask from a young player.”

It should also be noted that despite Jones’ increase in reps, Newton still worked with the first group offense throughout the day.

Following the draft the Patriots made it clear that Newton was to be the starting quarterback but the team’s other options would have an opportunity to prove themselves. Despite the high pick used on Jones the decision to bring him in was met with open arms from Newton who is ready for competition.

“It didn’t make me feel any type of way because he was the right pick, you know what I’m saying,” Newton said. “He was the best player available and that is what the NFL Draft is for. As far as having any chip on the shoulder, I mean, you’re stating the obvious. I don’t need too much to get myself going, let alone that happening. And it’s no disrespect to Mac. It’s no disrespect to Bill and his decision. I support it 110% because you still have to do what’s right for the organization, for the long haul.”