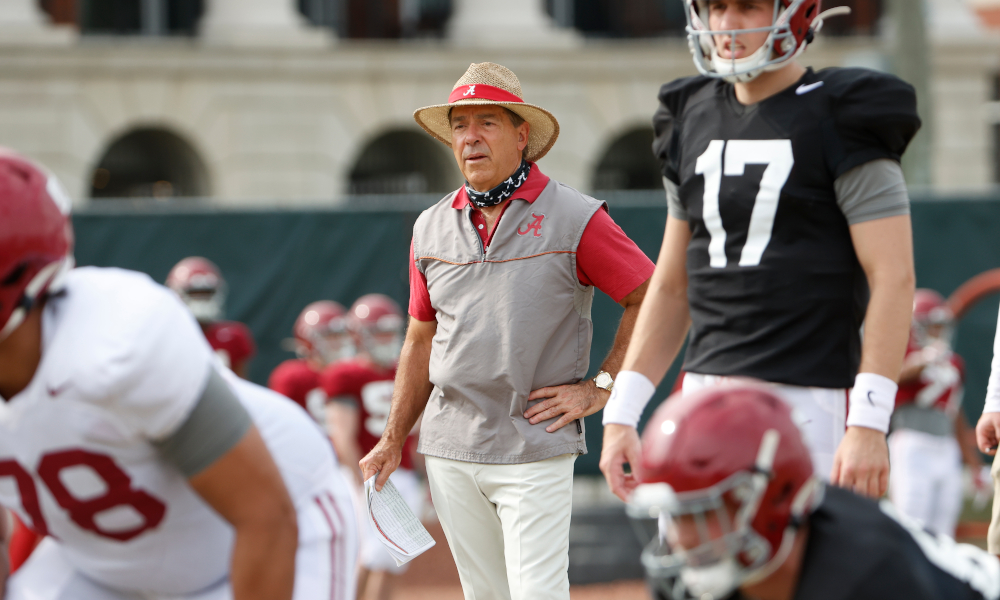 Since the day he first stepped on the gridiron Nick Saban has been known as a defensive specialist. His physical and tactical units have dominated multiple generations of the game of football at both the college and professional level.

That is until the past three years.

College football has gone through an offensive revolution in terms of variety of schemes and rule alterations which has caused scores and statistics to bloat and Alabama’s once dominant defense has seen itself on the wrong end box score a number of times.

Gone are the days of 9-6 finals or shutting out top 10 opponents. In today’s game its all about situational stops rather than extended periods of scoreless football.

One would think this new way of play would get under the skin of a defensive guru but it turns out to be quite the opposite. Instead of wishing for the old ways of college football to return, Saban has embraced the structure of offenses and has no issues at all with the state of the game.

During an interview with Nick Cellini and Chris Dimino of The Fan 680, on Thursday, Saban went into depth about his opinions of the current college offenses.

“It’s challenging as a defensive guy to be able to adapt and adjust the way the game is played now,” Saban said. “But I think the rules in college football have sort of ignited the change throughout the game. Blocking three and a half yards downfield on a pass play, which leads to RPOs, is a dramatic change in the way you play football. You need to be spread out to do that.

“To be able to block downfield on a pass behind the line of scrimmage, aight, which is just a rule that applies in college football, changes the game in terms of how you through screens and how you pick people and run people in the flat. And those are real challenging things to try and defend because the all create tremendous run-pass conflicts for defensive players.

“I would be bored if we were still running the I-formation if I was a defensive coach, and I am a defensive coach. …But it’s not that way anymore. It’s very challenging, a lot of adjustments to be made. But it’s also fun to watch for the fans because there’s more points scored. Sometime early on here in 2009, 2010 when we first came we led the nation giving up eight points a game. Last, year we gave up 19 points a game and we were first in the SEC, aight.

“It’s just a reflection of how much more difficult it is to play defense and good defense to me is how many points the other team scored. You can go through all the statistics you want, but not letting the other guys score is what defines good defense. So that’s changed dramatically because people score more points. But we hanged on offense because as good a defense as we have when we played Ole Miss and some of these spread teams that ran RPOs, they scored points against us, and we would lose the game 44-41.

“And I’m saying, ‘We’ve gotta change our style and be able to outscore people when you play teams that are that good on offense.'”