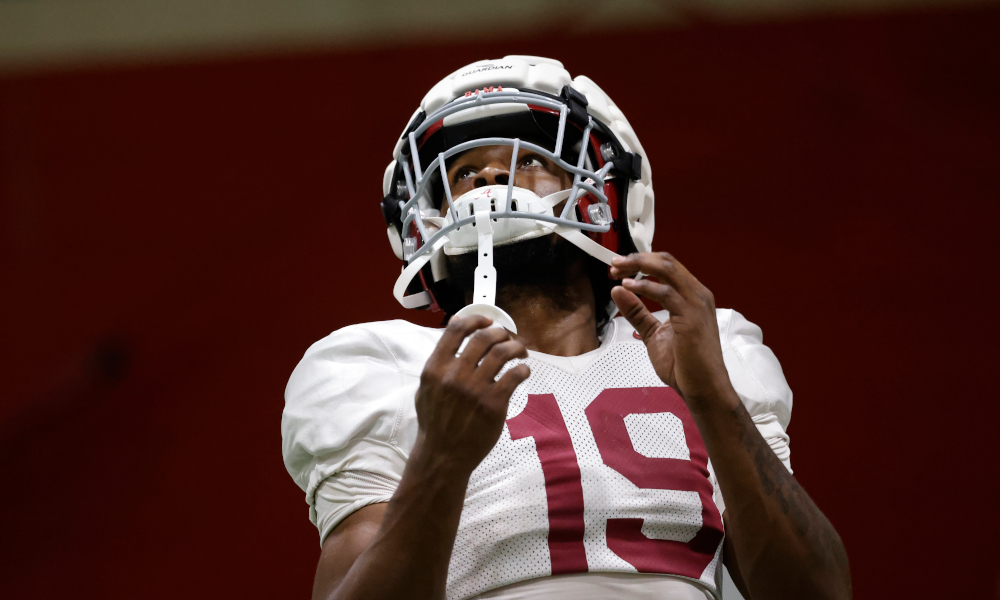 Alabama has twelve practices left in fall camp, and fans are worried about one player.

Jahleel Billingsley has an incredible opportunity this season. As a junior, an impactful campaign could land him a first-round draft value for 2022.

He is coming off a productive sophomore year, especially in the last seven games. Billingsley caught 18 passes for 287 yards with three touchdowns. His scores came on big plays versus LSU, Auburn, and Notre Dame, as he helped Alabama secure a national championship.

The 6-foot-4, 230-pounder had a great spring, unfortunately, he appears to be in Nick Saban’s doghouse during fall camp. Coach Saban has made two sharp statements toward Billingsley, including one on Saturday.

After the second scrimmage, Saban was asked about Billingsley’s progress at tight end. He had missed the first couple of practices for COVID protocols, but the seven-time national champion took the moment to address Billingsley and the team.

He has mellowed out in his older years, but the 69-year-old still handles situations by the book.

His message is to follow “The Process,” and each player must go about it accordingly. The message for Alabama fans is to relax, as Billingsley is not the first player to encounter this situation.

He and Saban will find a way to work it out where Billingsley becomes better for it.

We remember the big plays from Kenyan Drake’s career. Whether it was his 87-yard touchdown catch versus Florida, his performance against Michigan State in the Cotton Bowl, or his 95-yard kick return touchdown in the College Football Playoff National Championship Game versus Clemson, we remember Drake’s greatness. People forget the native Georgian spent two seasons in Saban’s doghouse.

Drake would have more explosive plays than T.J. Yeldon and a higher rushing average; nevertheless, the future NFL running back could not stay out of his own way at times.

RELATED: Nick Saban sends a strong message to TE Jahleel Billingsley: “This is not a democracy”

He finally bought into Saban’s mindset in 2014.

Alabama started using him as a wide receiver, and Lane Kiffin’s play-calling generated favorable matchups for Drake. He sustained a couple of injuries in 2014 and 2015, but he was on the field more. Because he bought in, Drake had one of the most memorable moments in history.

His 95-yard kick return touchdown was one of the biggest plays in the CFP title game. He pushed the Tide to a 45-40 victory over Clemson, and his play earned a Daniel Moore oil painting.

This does not happen if Drake would have refused to listen to Saban.

Tony Brown was another player that Saban had to work with. He had broken team rules, was sent home for starting a fight before the Cotton Bowl, and would get into with guys at practice. Some wanted to see Saban put Brown off the team, but he refused to give up on the native Texan.

He challenged him; however, he stayed by Brown’s side and helped him mature.

Because of this, Brown became one of the critical factors for Alabama’s 2017 national championship. He intimated opposition in pre-game warmups, recorded a career-high 31 tackles, collected an interception versus Georgia in the national title game, and was the emotional leader of the defense. These moments of success happened when Brown decided to buy into Saban’s plan.

In 2019, Christian Barmore was reportedly in Saban’s doghouse.

He was a monster on the defense, yet he earned little playing time. When he became open to what Saban wanted, Barmore was dominant in 2020. He was a nightmare for quarterbacks as he led the team in sacks (eight). The Philadelphia (Pa.) native was responsible for 9.5 tackles for loss, six quarterback hurries, three pass breakups, and three forced fumbles. Barmore recorded a stellar performance versus Ohio State in the CFP National Championship Game.

He was the Defensive MVP for his efforts as he assisted the Tide in demolishing the Buckeyes, 52-24, at Hard Rock Stadium in Miami, Fla.

All three players would be selected in the NFL Draft.

RELATED: “Alabama culture” not allowing NIL to be a distraction, per Bryce Young

Drake is with the Las Vegas Raiders, Brown is on the Cincinnati Bengals, and Barmore is with the New England Patriots.

Nick Saban is not like other coaches in college football. Players must earn and constantly earn their stripes with him. Najee Harris, DeVonta Smith, Terrell Lewis, and Brian Robinson were all suspended for Alabama’s 2019 season opener against Duke because of a violation of team rules.

All four got their act together, and two of them became first-round draft selections.

Smith won the 2020 Heisman Trophy, and Harris won the Doak Walker Award. Both players were Unanimous First-Team All-Americans, while Lewis was chosen in the third round of the 2020 NFL Draft by the Los Angeles Rams.

Jahleel Billingsley has star potential, but he has to buy-in. He is not the first one in the spot, and he will not be the last one.

Drake, Brown, and Barmore were three of the premier players for the Tide. Each one started on the wrong foot, but they earned a way out and became successful. Billingsley has to earn his way out of the doghouse. The reward will be great when he does.