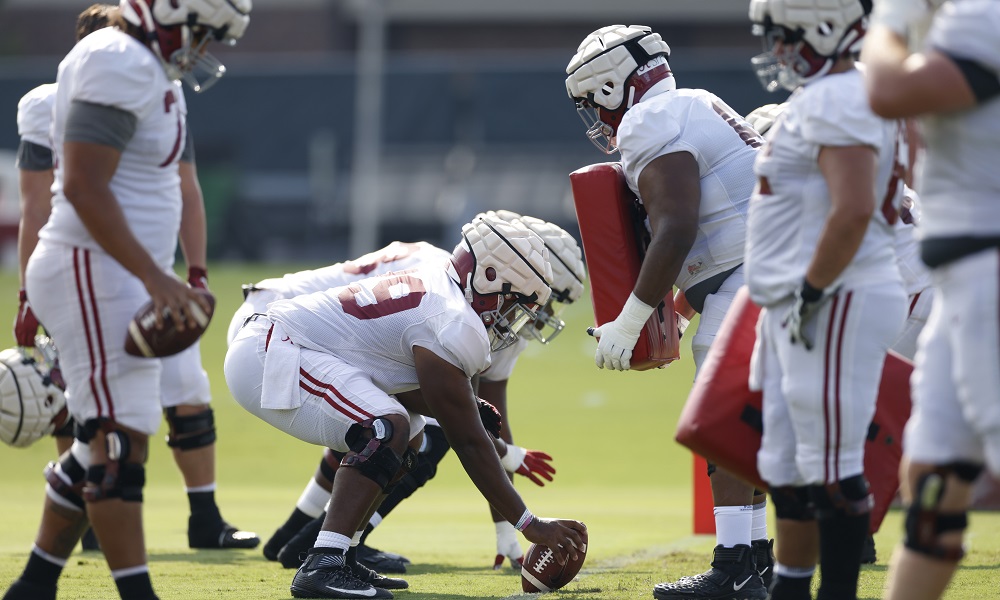 Alabama’s search for a long term replacement for the departed Landon Dickerson is still ongoing. Despite sixth year senior Chris Owens deciding to suit up for the Crimson Tide for one last go around, it’s still not a sure thing he will be the starter when Alabama opens up against Miami.

Head coach Nick Saban spoke about the competition at the heart of the offensive line and that the team is still trying to get more consistency at that position.

“I think that we’ve got to get a lot more consistency at the center position,” Saban said to the media on Wednesday. “Consistency in both snaps and blocking. We do have competition at the position, no doubt about that. Both guys are making progress and both guys are competing. Both guys have been a little banged up at times, so there hasn’t been that consistency we like to see in terms of them going out there and doing what they gotta do.”

“It’s a work in progress right now and no decision has been made as to where we are in who’s gonna win that job.”

Junior offensive lineman Darrian Dalcourt has been pushing Owens for playing time throughout fall camp. Saban has also said that versatile offensive lineman Kendall Randolph has taken snaps at center, but likely won’t be functioning in a starting capacity.

Center isn’t the only spot Alabama has up for grabs on its line as right tackle and one of the guard spots are also still open and that the unit as a whole still has some ways to go.

“I think we’ve got work to do, especially in that group playing together and getting confidence in the calls and especially in pass protection and so forth,” Saban said last Saturday following the team’s scrimmage. “But I’m confident that they’re going to make the kind of progress. I saw a lot of improvement from week one to week two.”