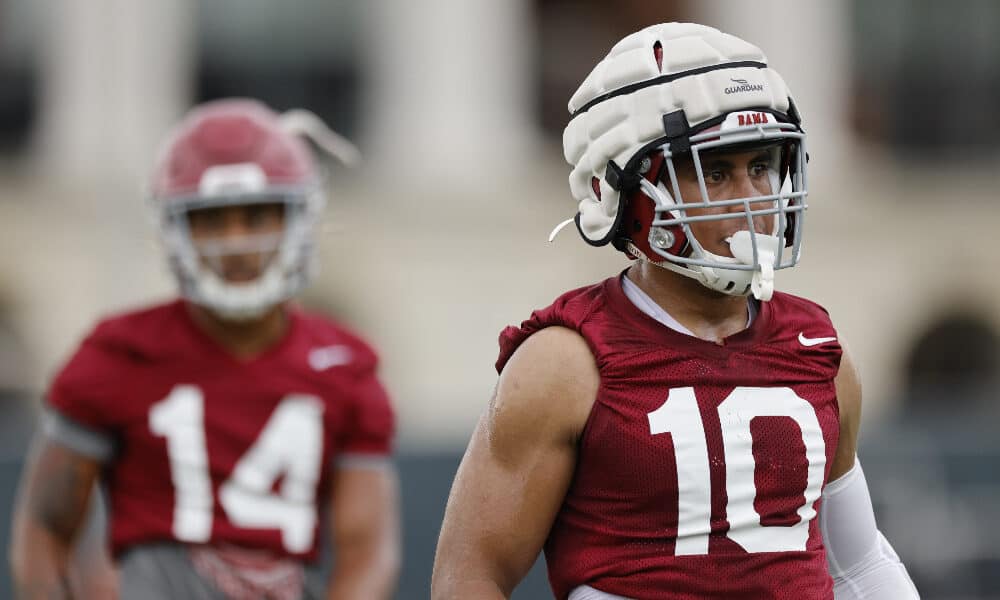 One year ago, linebacker Henry To’oto’o was figuring out how to end the long losing streak Tennessee has against Alabama. Today he’s trying help the Crimson Tide repeat as national champions.

What a difference 365 days can make.

And following his impressive debut performance against Miami, To’oto’o spoke to the media for the first time and had the opportunity to explain his decision to come to Alabama.

“Definitely coach Saban,” To’oto’o said.” You know who doesn’t want to play for coach Saban? And the culture. You know the guys around here — how they are so eager to win. It’s just a blessing for me to be here.”

To’oto’o made his decision to transfer to Alabama back in May after being in the portal since January. The time in between was strenuous for To’oto’o who had to decide where he’d be playing out his collegiate career, but he and his family turned to their faith to get them through the period.

“When I was in the portal it was kind of a crazy time,” To’oto’o said. “Crazy time for me and my family. But you know it was honestly all through faith, all through our prayers as a family, sticking together as a family. Trying to find the right home, and I’m truly grateful for my decision. I’m grateful to be here, I’m grateful to be part of the family and you know it all worked out perfectly fine.”

During Satuday’s, game against the Hurricanes To’oto’o put on a show as he posted the second most tackles on the team with seven. If someone was to describe his performance as one of a seasoned veteran for Alabama, there’s a good reason why. To’oto’o played under former Crimson Tide defensive coordinator Jeremy Pruitt who helped shape him into the player he is today.

To’oto’o spent two years with Tennessee where he appeared in a total of 22 games under Pruitt and recorded a total of 74 solo tackles, 12.5 tackles for loss, 1.5 sacks, one interception and one defensive touchdown.

“I give a lot of props to coach Pruitt,” To’oto’o said. “He taught me a lot of the game. Taught me a lot about the system. Similar systems, you know, similar defense, and being able to learn it from him and then come here and apply the teaching that he taught me and kind of take it on from there with coach Saban and coach Golding really helped me and my transition here. Coach Pruitt helped me a lot.”

Although he’s traded in the orange for crimson, and is on the opposing side of a heated rivalry, To’oto’o is still close with his Volunteer teammates after his departure.

“Those are my brothers man,” To’oto’o said. “Been to war with those guys — and those relationships you build aren’t just gonna fly away. So I definitely keep in touch with my Tennessee guys. Watched them play last week, I was truly happy that they got a win.”