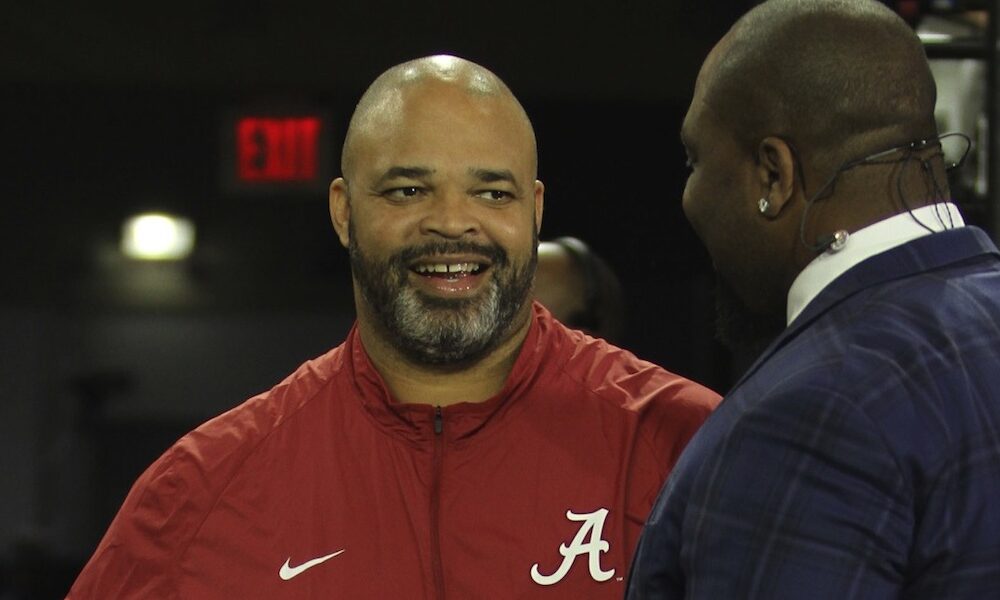 At 51 years old, the native Mississippian is one of the most passionate position coaches in college football. He has been a winner throughout his career, molding young men and not sugarcoating anything. He won a BCS National Championship in 2003 at Louisiana State University on Nick Saban’s coaching staff.

Davis served as an assistant strength and conditioning coach.

He won two national titles at Alabama (2009, 2015) in two different stints with the program.

He was hard on those players, but they loved him.

That’s why we won at Bama because of coaches like him we all would do anything for him!!! https://t.co/w07YMo3plt

Davis is in his second stint at the University of Texas as its defensive line coach. The Longhorns suffered its fourth straight loss versus Iowa State. After getting handled 30-7, Davis was not pleased upon getting on the team’s bus. Texas allowed 23 first downs, 476 yards offensively, and 175 yards rushing.

Davis let out a passionate statement — filled with expletives — but he wears his desire to be the best on his sleeve. Davis is a winner.

He hates losing more than he loves winning.

He loves players that fight and that are self-motivated to dominate the opponent.

Davis has not seen it from this Texas team, and it has frustrated him.

Since he departed from Tuscaloosa, the Tide has been lacking passion. Some players have it, but some do not. Athletes feed off the mentality of coaches, and we have not seen enough coaches with the fire for Alabama this season. Davis had it in his six years (2007-10, 2014-15) coaching defensive linemen for the Tide. His love for the game brought the “dog mentality” out of several players who were drafted to the National Football League.

Get this man a plane ticket back to Ttown. We haven’t had this type of attitude on our D line since he left! https://t.co/LV6oMUIUVR

How soon can we get Bo back to Bammer? This that intensity and passion we need post haste. Now you see why we wanted this man back on that D-Line coaching for years violations or not idc! This Bama factor 👀 https://t.co/JGsWJXmkE4

I miss Bo so much. The reason he was fired from Alabama was a very valid reason. Maybe it’s time to bring him home? https://t.co/Rl0iVk48iA

This is what we need. Mr Bo Davis. https://t.co/erhhP7AgNK

No one knows if Davis will return to the Tide, but his passion is missed.

He was fired shortly after the 2015 season for a recruiting violation, but it is time for Davis to come home.