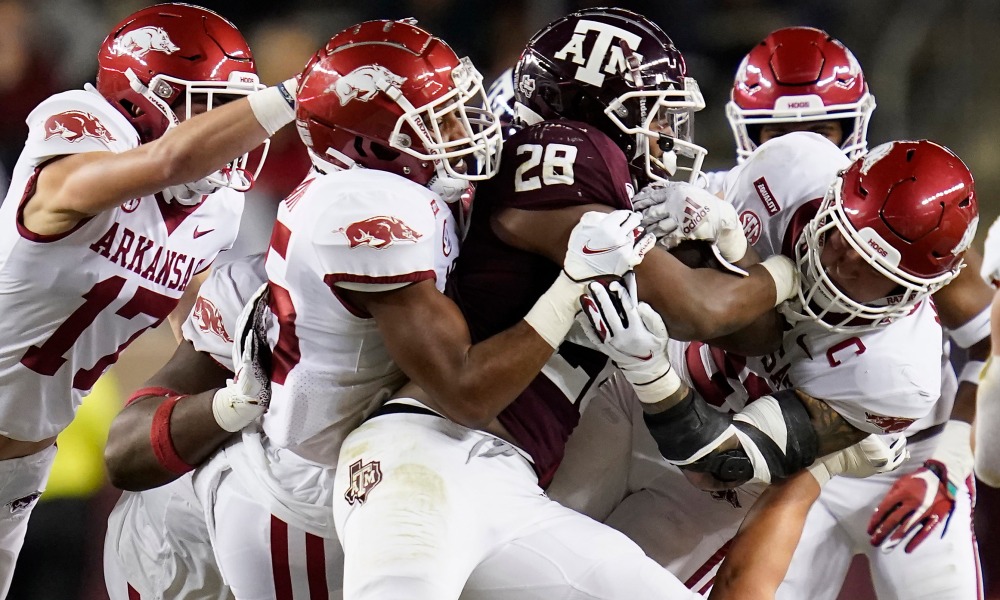 Alabama fans have a few concerns about this team.

An SEC showdown on Saturday could put one issue to rest. The Crimson Tide has faced talented defensive fronts, but the challenge never stops for its offensive line. Despite the success of Evan Neal at left tackle, Alabama has not had cohesion with its lineup all season.

Regardless of its performance versus New Mexico State, the push for a championship starts against Arkansas.

The Razorbacks have been the surprise team in the Southeastern Conference.

Sam Pittman improved the program in his first year; however, the Hogs have taken off.

Arkansas is 7-3 on the year with victories over Texas, Texas A&M, Mississippi State, and Louisiana State University. Pittman and his team will enter Bryant-Denny Stadium with a lot of confidence. Kendal Briles is the coordinator for an explosive offense, but Pittman and Barry Odom (defensive coordinator) have changed the culture on defense.

Arkansas allowed 30+ points to three teams; however, it knows how to affect opposing quarterbacks. Eighteen of the Razorbacks’ 19 sacks come from its front. Tre Williams, a senior, leads the team with six sacks on the defensive line. Hayden Henry, a senior, has a team-high 8.5 tackles for loss at linebacker.

Alabama’s had trouble with physical fronts, and Arkansas wants to muddy things up.

On Wednesday, Nick Saban highlighted the Razorbacks front as the strength of its defense ahead of the matchup.

“Their front is really good,” Saban said. “They are active and hard to block. They are physical. They do a good job of rushing and executing the defense.”

Saban singled out senior John Ridgeway as the difference-maker for the Hogs. The 6-foot-6, 320-pounder has four tackles for loss and two sacks at defensive tackle. He sets the tone for players around him to have success.

“He’s physical and hard to block,” Saban said of Ridgeway.

Arkansas plays a lot of three-man fronts, so the secondary will try to limit big plays from Bryce Young. Alabama’s offensive line faced this scheme versus Ole Miss and had success running the football. Can it mash the Razorbacks and create some swagger?

It will be important to have a consistent rushing attack. Hopefully, the front line will protect Young in the contest.