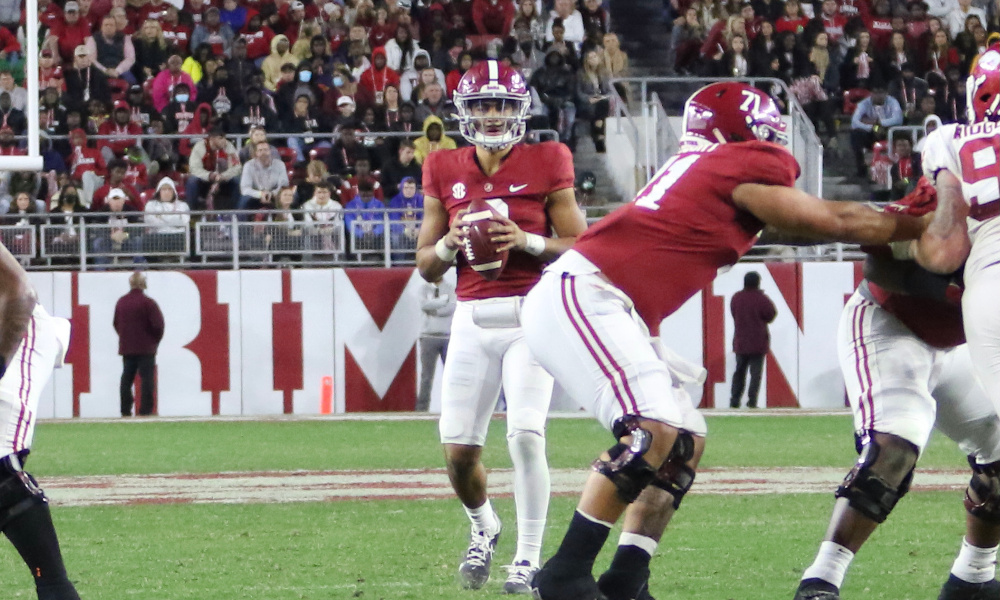 If Bryce Young was not Alabama’s starting quarterback, the Crimson Tide would have at least four losses on the season.

He has had to overcome several offensive inconsistencies for the Tide, but the first-year starter has guided the team to an SEC Western Division crown. Young helped Alabama punch its ticket to an SEC Championship showdown with Georgia last week.

The sophomore turned in a Heisman-worthy performance at Bryant-Denny Stadium versus Arkansas.

The California native had Tide fans on their feet in an entertaining matchup. Alabama’s defense surrendered 35 points, and the Hogs converted 10 of 19 attempts (52.6 percent) combined on third and fourth downs. Regardless of its success, the Razorbacks’ defensive secondary got torn apart by Alabama’s passing game.

Young broke a single-game school record for passing yards that stood for 52 years. Scott Hunter, a former Tide quarterback, tossed for 484 yards in 1969 against Auburn.

Young spun the football for 559 yards versus Arkansas in a 42-35 victory. He connected with nine different receivers, including two 100-yard recipients.

Jameson Williams and John Metchie totaled 150+ yards each while Williams led the receivers in touchdowns (three).

Young completed 78 percent of his passes (31-of-40) and had five touchdowns.

He had an answer for each time that KJ Jefferson delivered a scoring drive for Arkansas. The 6-foot, 194-pounder has seven 300-yard games, eight games with a 70% completion rating or higher, eight games with 3+ touchdown passes, six games with a quarterback rating of 90 or higher, and three games with five scoring tosses. Young is now third all-time in school history in passing yards (3,584), touchdown passes (38), and total scores (40) for a single season with the Tide.

Nationally, he is sixth for passing yards, tied for second in touchdowns, sixth for completion percentage (71.7), third for passer rating (186.2), and second for total quarterback rating (88.7). Young has been sacked 26 times, but he has Alabama with a chance to possibly win an SEC Championship and make the College Football Playoff. He has been marquee all season for the Tide’s offense, and the outing versus the Razorbacks was Young at his best on the field.

Alabama has yet to have a Heisman Trophy winner at quarterback. Young has solidified himself a trip to New York City.