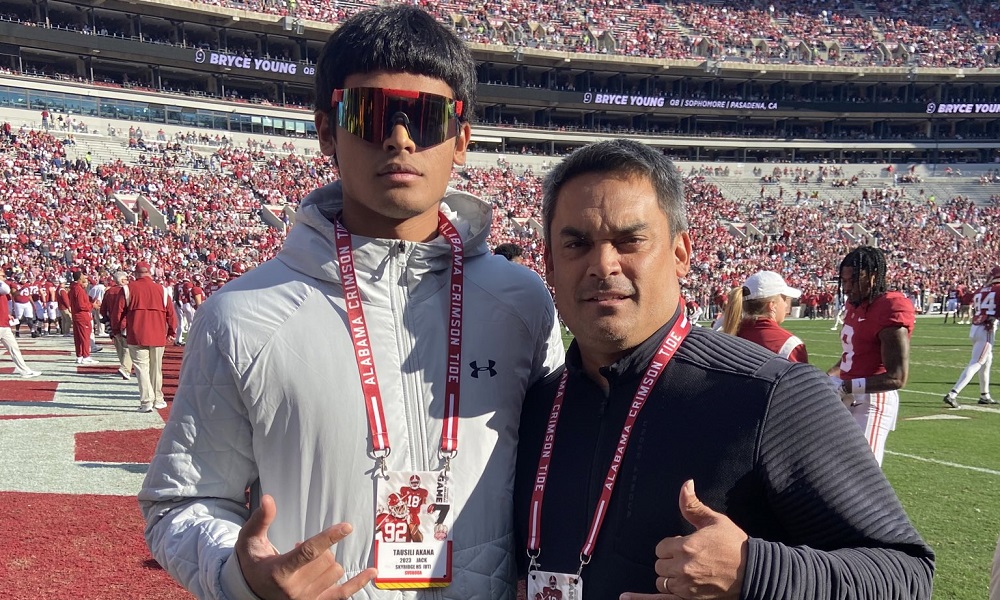 Nick Saban knows what a potential outside linebacker on Alabama’s defense looks like, and he believes Tausili Akana fits the bill.

Akana is rated as a four-star recruit by most recruiting sites and is a product of Skyridge High School in Lehi, Utah. He holds more than 30 D1 offers and is considered one of the top edge defenders in the 2023 recruiting class. Saban extended Akana an Alabama offer Saturday.

“It was crazy,” Akana said. “My dad and I were both sitting in his office. I got to hear what Coach Saban thinks about my defensive game. He gave me a lot of feedback on ways for me to improve.”

Akana went on to express his opinion on the success Alabama football has enjoyed under Saban.

“The success has been ongoing for coach Saban and the Alabama program,” Akana said. “He has built the success around his players. The entire state of Alabama supports the program. I love what he is doing there.”

At 6-foot-4 and 225 pounds, Akana possesses long arms and is effective at using his length to get around offensive tackles to make plays in the backfield. Saban told Akana he was impressed with what he brings to the table as an edge rusher.

“He likes my athleticism and how I use my length. He loves how physical I play behind the line of scrimmage. He wanted me to watch Will Anderson and Dallas Turner during the game. That is the position he sees me playing.”

The four-star recruit was able to see first-hand what Anderson and Turner do as outside linebackers for the Crimson Tide in their win over Arkansas.

“I love watching them play,” said Akana. “I love how they bring the pressure on opposing quarterbacks. That is what I enjoy doing, disrupting the offense.”

Akana was one of several prospects who pulled an offer from Alabama last weekend.