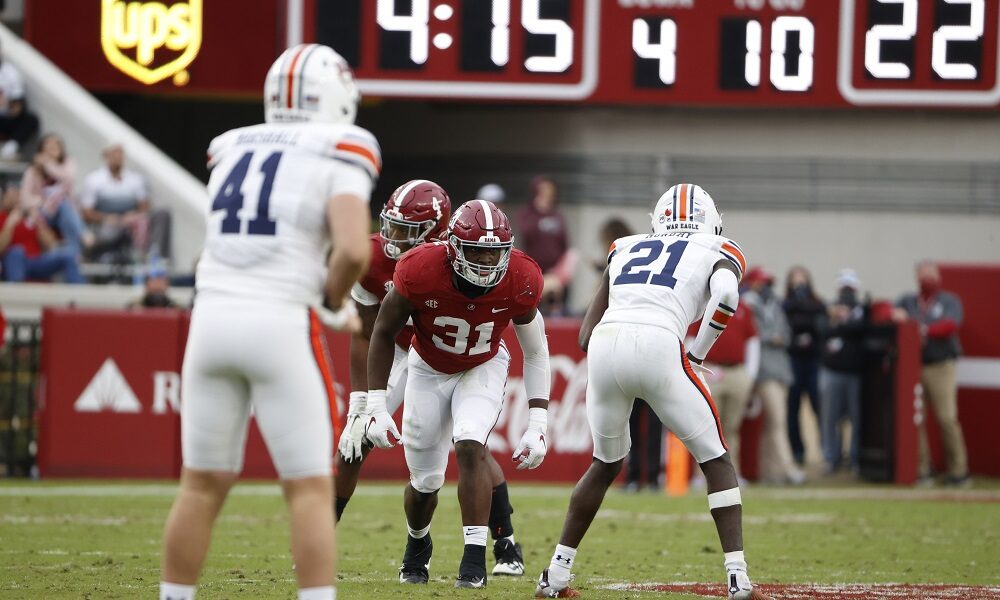 We are in rivalry week for college football.

Fans get excited during this time of the season because the passion for their program comes out.

RELATED: Will Anderson and Dallas Turner becoming a dangerous pass-rushing duo for Alabama

The best rivalry games in the sport produce massive television ratings, emotional highs and lows, incredible finishes, and fans leaving with long-lasting memories. College football is full of great rivalries, but the Iron Bowl is arguably its best one.

Since 1893, the matchup between Alabama and Auburn has been the most passionate, intense, documented, and thrilling rivalry in the game.

Both schools are in the state of Alabama and separated by 157 miles. The Iron Bowl is captivating because people must choose Alabama or Auburn from birth. Parents dress their children in either crimson or orange and blue until they are ready to choose.

After that, one must pledge allegiance to “Roll Tide” or “War Eagle” for life as a football fan.

If you don’t choose in this state, both fan bases turn on you. The childhood passion grows into friendships, the companion a person decides to marry, and shopping areas. Alabama fans enjoy hanging with each other, and it’s the same for Auburn fans. If a Crimson Tide fan marries an Auburn fan, you have a “House Divided.”

RELATED: Alabama alums partner to give families over 700 turkeys for Thanksgiving

Central and West Alabama have more Crimson Tide gear in stores, while east Alabama is in Tiger territory. The winner of the Iron Bowl provides its supporters with a year to laugh, boast, gloat, and feel like their representing the right team. The loser is quiet, disappointed, hurt, and deals with rough emotions for a year.

Alabama and Auburn have had some of the greatest games, especially in the Nick Saban era. The contest decided a Heisman Trophy winner in 2010 (Cam Newton, Auburn), it’s had significance on the SEC West in some years, and the winner of the Iron Bowl has won an SEC Championship and a national title.

The state of Alabama does not have a pro football team.

Many of the rivalry games in college football are between two programs in states that have professional teams. Alabama, on the other hand, has nothing but the Crimson Tide and Tigers. The Iron Bowl is an everyday conversation for residents in this state.

No matter the season, one will see people discussing their emotions about Alabama and Auburn.

Nothing takes their attention from it, and that makes the Iron Bowl the best game. One can look away from other rivalries, but it cannot turn from the Iron Bowl. Alabama and Auburn mean everything to the state and college football.