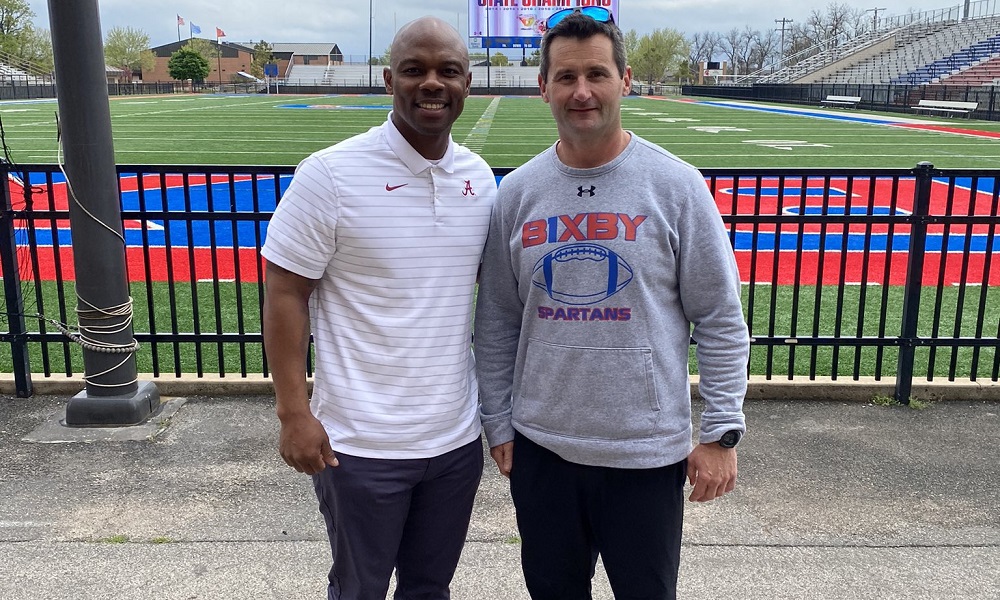 Multiple coaches on the Alabama football staff have spent the last few days on the road evaluating and extending new offers to top recruits.

Here is a quick look at the prospects who have recently pulled in offers from Alabama.

Bridgeman is one of the few 2023 recruits who have picked up an Alabama football offer recently. He attends Imhotep School in Philadelphia, Pennsylvania, and he currently has a top eight, which includes Georgia, Florida and others. He is in the process of setting up a visit to Alabama. His offer came from Bill O’Brien.

Thomas recently committed to the Texas A&M Aggies, and Alabama offered him Wednesday. The Texas product is an explosive athlete who made plays with his speed and elusiveness on both sides of the football during the 2021 football season.

Alabama became the 29th program to offer Simmons Wednesday. His offer total now stands at 30 with a recent offer from Houston. Simmons is listed at 6-foot-3 and weighs 215 pounds, and he garners a five-star rating from multiple recruiting sites. The Duncanville High School (TX) product has an explosive first step and is impressive in space.

Van Buren picked up an offer from the Crimson Tide Monday. Alabama was the 18th D1 program to offer the St. Frances (MD) product. At 6-foot-1 and 180 pounds, the sophomore signal-caller made some impressive deep throws down the field while maneuvering around the pocket. Van Buren’s offer came from Holmon Wiggins.

Alabama offered Gipson Wednesday. The Lancaster High School (TX) product holds more than 15 offers, and he garners a four-star rating from multiple recruiting outlets. He currently stands at 6-foot and weighs approximately 170 pounds. Gipson helped defend against the deep ball as a safety for Lancaster during the 2021 football season. His offer came from Holmon Wiggins.

Hampton is a unique prospect who is receiving interest as a defensive back and wide receiver. He is currently verbally committed to the Texas Longhorns, and he is rated as a four-star recruit by all major recruiting outlets. He finished the 2021 football season with more than 1,300 receiving yards, 20 receiving touchdowns, 10 interceptions and more than 90 tackles. His Alabama offer came from Holmon Wiggins.

Roberson received an offer from Alabama Wednesday, and he has the potential to be a wide receiver or defensive back at the next level. He holds more than 15 D1 offers, and he currently stands at 6-foot and weighs approximately 180 pounds.

Butler reeled in an offer from Alabama Monday. The Calabasas High School product holds 18 D1 offers, and he is verbally committed to USC. He is listed as an athlete on most recruiting sites because of his elite speed and versatility.