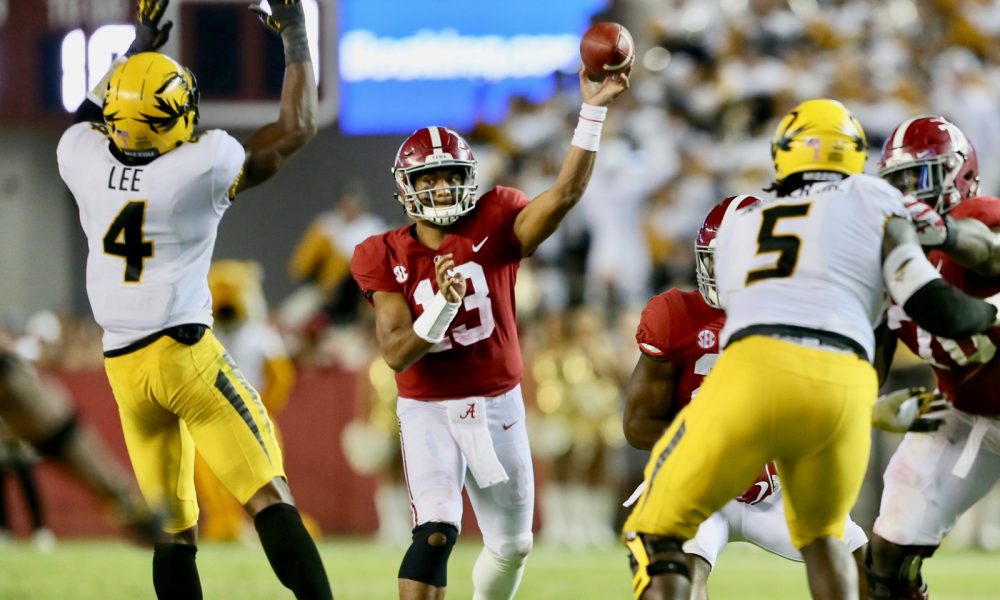 Even after his legendary seasons at Alabama, it’s no secret that the early part of Tua Tagovailoa’s career in the NFL has been full of inconsistency.

Tagovailoa was selected with the fifth overall pick in the 2020 NFL Draft by the Miami Dolphins and was immediately expected to be the franchise’s answer at quarterback after several years of dismay. But even before the southpaw stepped onto the field to compete for the starting spot, he had a massive obstacle to overcome.

Before the start of his rookie season, Tagovailoa was in the middle of rehabbing a dislocated hip he suffered at the end of his playing career with the Crimson Tide. Unfortunately, the hip injury would be something that lingered over Tagovailoa as he appeared to not be quite the same player he was when at Alabama.

Perhaps the most noticeable difference in Tagovailoa’s game stemming from the injury was the regression of his arm strength which limited him even more.

But for the past two offseasons, Tagovailoa has worked with his trainer Nick Hicks of Per4orm Sports to get his strength back. Hicks spoke with Touchdown Alabama and reported that Tagovailoa’s arm strength has returned to its Alabama form.

“Yes he’s back to Bama Tua, if not stronger,” Hicks told Touchdown Alabama. “So his rookie year he was fresh off the injury with zero to little strength training. At all. Didn’t even expect to play as a rookie, but did. Was about 60% of himself, if that. Last offseason we focused on strength and strength alone. I can’t tell you how weak he was which is common after a hip injury like that. But if we were to skip the foundational strength aspect and just go actually skill training like footwork, lateral movement, on rhythm throwing off-platform throwing, it would of bit us in the ass and he probably would have had another setback with the hip.

“This offseason was a completely different plan. He maintained the strength throughout the season and was ready to rock and roll once our offseason plan commenced. So as for this offseason, we focused on the skill aspects I stated above as well as strength training because we could. When Tua’s legs are conditioned and twitchy, he’s at his best. So we did countless amounts of lower body footwork drills, off-platform throws, throws on the run, two-minute drill simulations, we actually got to train to play quarterback, not rehab and injury.”

In 2021 as the team’s primary starter, Tagovailoa appeared in 13 games and threw for 2,653 yards, 16 touchdowns, and 10 interceptions while completing 67.8% of his passes. Despite his extensive rehab, the Dolphins heavily invested in the offense this offseason in hopes to best support Tagovailoa.

With the alleged return of his full strength, Tagovailoa hopes to finally be able to turn the Dolphins around as he originally planned on draft day.