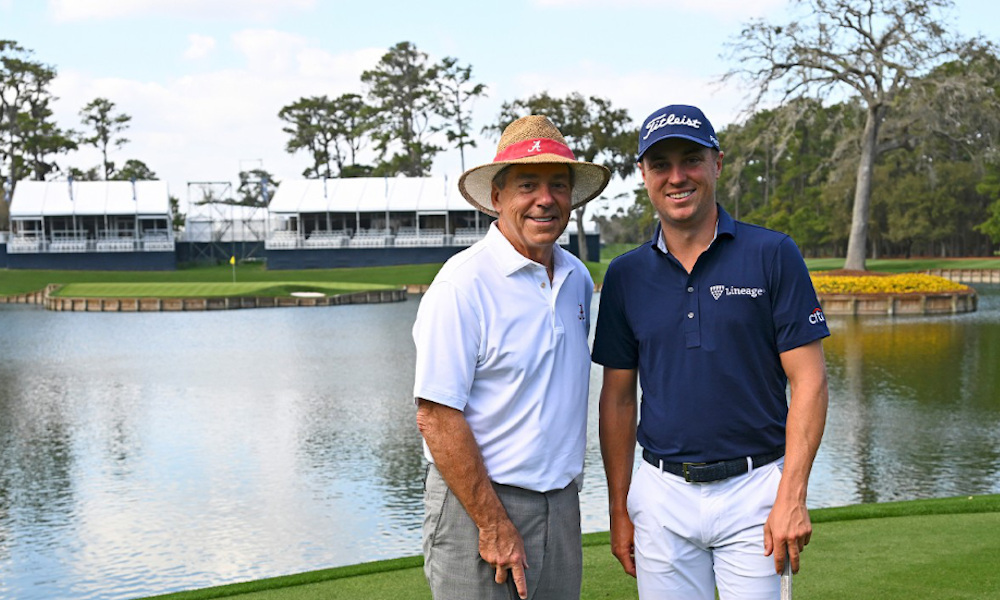 Alabama football is gunning for its No. 19 national championship, seventh under Nick Saban, and fourth in the College Football Playoff era in the fall.

Coach Saban has the staff, players, and support staff capable to hoist the CFP Trophy, and the Crimson Tide is determined to redeem itself after a loss to Georgia in the title game. He will not be the reason for Alabama potentially winning a national championship this season, but Justin Thomas and Crimson Tide football have a great relationship. Thomas and Saban love the golf course, and the two-time PGA Championship is an Alabama alum. Thomas has learned a lot from Saban and he’s also embraced the coach’s “24-hour rule” in celebrating a championship. Inspiration has come from several areas in the Crimson Tide’s national title runs. Could Thomas be the next piece of good fortune for Alabama football? History states he may be.

RELATED: Will Alabama’s matchup against Texas A&M be a night game on CBS?

Alabama has won a national championship when Thomas has been honored in golf. Thomas won the Haskins Award in 2012, which goes to the most outstanding collegiate golfer in the United States. Saban followed Thomas’ efforts by winning the second of back-to-back BCS National Championships in the fall. Thomas brought in several awards in 2017 — including FedEx Cup Champion, PGA Tour leading money winner, PGA Player of the Year, PGA Tour Player of the Year, and PGA Championship.

Thomas’ success rubbed off on the football team as Jalen Hurts and Tua Tagovailoa led the Crimson Tide to a CFP National Championship. Tagovailoa entered the matchup against Georgia in the second half and delivered the team to a 26-23 comeback victory in overtime. Thomas won PGA Player of the Year in 2020 for the second time in his professional career. Mac Jones took Alabama football to an undefeated national championship in 2020 as a first-year starting quarterback. When Thomas has won anything in golf, it brings good fortune to Crimson Tide football. He picked up his second PGA Championship last week.

Will Alabama football win a national title in the fall? We will see. Summer workouts and fall camp are coming soon.