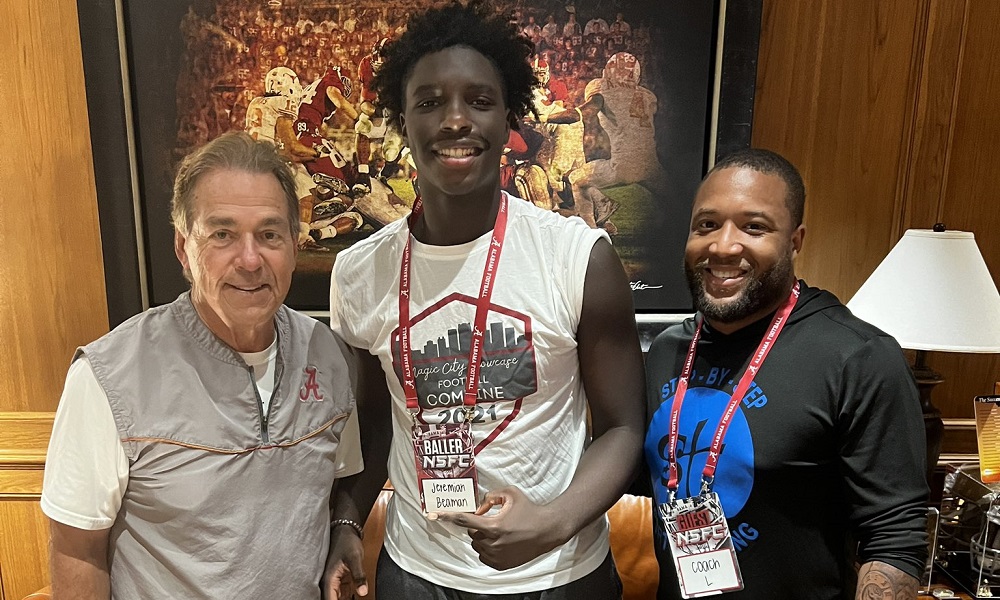 Jeremiah Beaman is well on his way to becoming one of the top 2024 defensive lineman prospects in the country.

Beaman is a product of Parker High School in Birmingham, Alabama, and he garners a four-star rating from multiple recruiting sites. He holds 13 D1 offers, and his recruitment is continuing to grow. Alabama extended an offer to Beaman on May 21, which turned out to be a great moment for him and his family.

“It felt like a dream,” Beaman told Touchdown Alabama. “I will remember that moment for the rest of my life.”

The four-star recruit went on to express his thoughts about the Alabama program, and he discussed his relationship with members of Alabama’s coaching staff.

“It is an amazing program,” Beaman said. “Coach Saban is the nicest guy you will ever met, but on the field, he turns into a whole different animal. Coach (Freddie) Roach is one of the best coaches I ever met. He is a very funny guy, and he really cares about his guys. I really enjoy spending time with coach Roach.”

Beaman camped at Alabama Saturday. He described the experience as different. Saban sat down and talked with Beamn at the conclusion of the camp.

“It just felt like a dream, it is Nick Saban,” said Beaman. “I was at a loss for words, and I was just trying to focus on listening to what he said to learn a lot from him. He is such a wise guy.”

At 6-foot-4 and approximately 260 pounds, Beaman can make plays all over the field. Touchdown Alabama saw him in action at Parker’s spring game, and he stood out every time he was on the field. He put constant pressure on the quarterback, and he made it difficult to run the football up the middle.

He has great size, he uses his hands well and he was all over the field.

His offer list is continuing to grow. He will be a National recruit. @CoachL__ pic.twitter.com/9c0gOVucVk