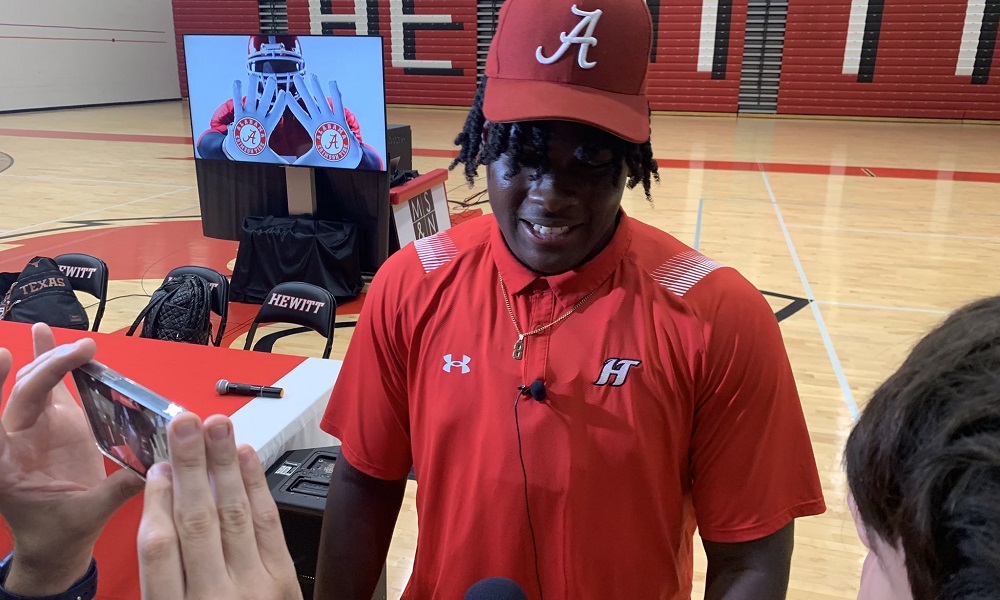 Hunter Osborne announced his commitment to Alabama Monday, and he immediately began his push to help the Crimson Tide land another top in-state defensive lineman prospect.

Osborne chose Alabama over Clemson, Tennessee and Texas. He told members of the media several factors led to his decision after his announcement.

“It was multiple things,” Osborne said. “It could have not been one. It was their great development, getting a chance to play for coach Saban, always on top every single year, going up against the best guys. It was multiple things that led to it. They all add up. I got to choose Bama.”

Osborne’s decision was a tough one, which led him to stay up to 3 a.m. one night. After evaluating all of his options, the school he grew up a fan of seem like the best choice for him.

“I know where I want to be,” Osborne added. “I have been here my whole life. I have been to the games, I know the fans and I know the coaches. Alabama has everything I need to make me the better player I need to be. It was like the perfect piece of the puzzle.

“I can relate to him really well. We talk every single day.”

Alabama’s 2023 commits have been actively helping Alabama recruit. Osborne quickly jumped on board by letting everyone know he was going to try his best to help get four-star defensive end, Kelby Collins, to Tuscaloosa.

“Kelby is next,” Osborne said. “I am trying to get him. I am going to continue to be on him.”

He knows when he wants to announce a commitment. He talks top 6, upcoming official visits and more.

He is up to 265 lbs heading into the summer.

Osborne’s recruitment is behind him, and he is locked in with the Tide. His attention is now focused on helping Hewitt-Trussville have a successful season.

“I am so excited to finally say I am a part of the Crimson Tide, and I am going to play for Alabama,” said Osborne. “At the same time, I know I have my senior season ahead of me. I am ready to work with my boys.”