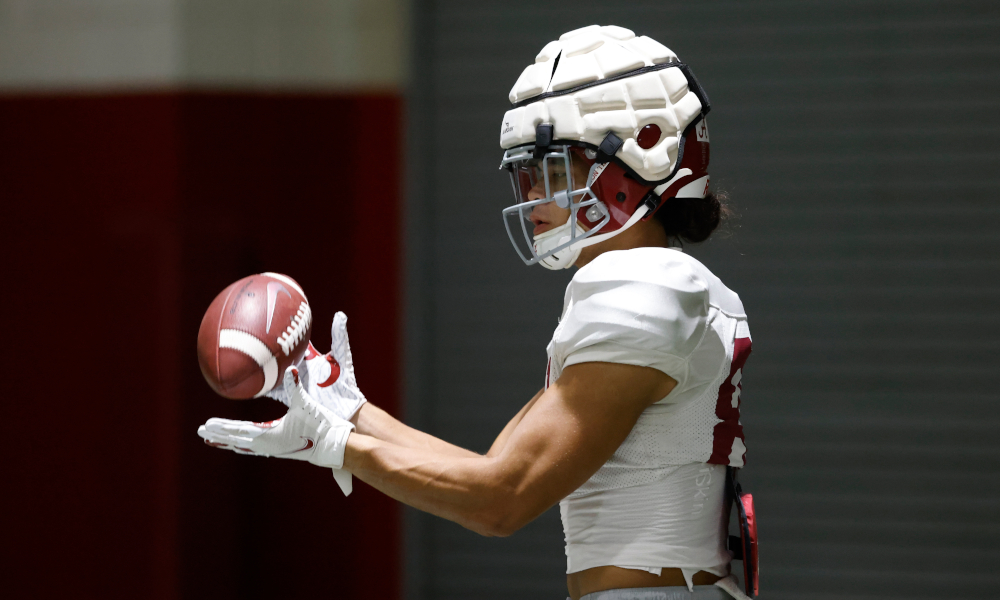 On the first day of Alabama’s fall camp, it was learned that tight end Cameron Latu would be missing some time. When head coach Nick Saban was originally asked if he knew what was wrong with Latu he simply answered, “Yeah I do,” not offering any specifics.

But on Sunday, Saban pulled back the curtain and offered a new update on the senior tight end who turns out to be dealing with a knee injury that will sideline him for a few weeks.

“He has a minor knee injury,” Saban said on Latu. “He’s going to be out a couple of weeks. I don’t know exactly how long that is. Happened about 10 days ago. These things usually go day-to-day.”

Offensive coordinator Bill O’Brien praised Latu for his work ethic in rehab saying that the tight end has been putting in several hours a day in hopes to return to the practice field soon.

“It’s unfortunate what happened to him, but this is a guy that’s just a great guy,” O’Brien said. “He was in the training room that day, working to get back. He’s been in there, it almost seems like, 12-15 hours a day, working hard to get back. So he’ll be back at some point.”

O’Brien also noted that sophomore Robbie Ouzts and JUCO transfer Miles Kitselman would be two players the Crimson Tide would look to fill in during Latu’s absence.

“I think Robbie Ouzts has really improved,” O’Brien said. “Robbie Ouzts is somebody that’s worked really hard to improve. And then Miles Kitselman, the junior college transfer that’s come in, he’s a hard-working guy. he’s getting used to the way we do things here, but I think he’s a guy that is a solid player that can help us. And then there’s a lot of young guys.

Along with the Crimson Tide’s leading returning receiver, Saban offered several other injury updates from a few of the team’s younger players.

Within his update, Saban shared that freshman defensive lineman Isaiah Hastings came to Alabama with an injury and will return later, five-star offensive lineman Elijah Pritchett tore his pectoral muscle in the weight room and will miss time, freshman defensive back Earl Little Jr. had a shoulder injury which the Crimson Tide’s medical staff also decided to clean up and freshman wide receiver Aaron Anderson who made waves back in the spring due to his speed also has a knee injury and will miss a few weeks.

“(Isaiah) Hastings came in with an injury,” Saban said. “We fixed it. He’ll be back shortly probably. Elijah Pritchett tore his pec in the weight room a while back in the summer, so he’ll be out for a little while. Earl Litte had a shoulder injury coming in that was bothering him, so we decided to fix it. So he’ll be out for a little while as well. But Aaron Anderson has a little knee injury, but he’ll probably be back within a few weeks as well.”

Along with the freshman eyeing to breakthrough, transfer wide receiver Tyler Harrell has been looking to make an impact on the offense as well. But Saban later shared he has also been a player who’s not been 100 percent healthy since he arrived in Tuscaloosa.

“Tyler (Harrell) has been sort of in and out a little bit to this point,” Saban said. “He has been able to practice on a daily basis but not 100 percent. I do think that he’s shown that he has a lot of ability. We just need to get it channeled in the right direction so that we can use him in a way that’s most productive for him and us.”