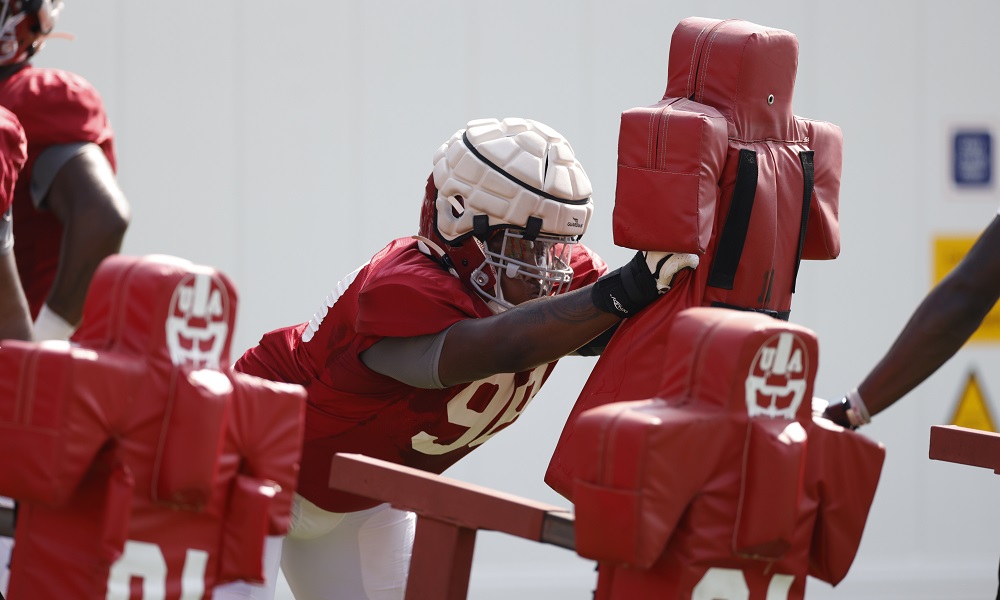 Alabama has returned a great deal of talent and experience on the defensive side of the ball headlined by one of the nation’s top players in linebacker Will Anderson. But one of the unit’s key areas needing to be addressed is the interior pass rush from the defensive line.

Last season senior defensive lineman Phidarian Mathis was a standout for the front recording 10.5 tackles for loss along with 9.0 sacks operating in the middle of the defense. Mathis is now gone to the NFL and the Crimson Tide has its work cut out for it when it comes to finding a replacement.

Thankfully for Alabama, it has a number of talented options looking to emerge as impact players along the front.

During the team’s media day on Sunday defensive coordinator, Pete Golding shared a few players who could be potential solutions to the team’s interior rush.

Golding touched on a few names such as DJ Dale and Byron Young who are expected contributors along the defensive line. But he also shared that players such as Jamil Burroughs, Jaheim Oatis and Jah-Marien Latham have all shown up so far during fall camp.

“I think obviously it’s early, we just put pads on yesterday but I think between, Burroughs, you know Jamil Burroughs. I think he’s got some twitch in there,” Golding said. “Byron (Young) obviously. We leave DJ (Dale) in there. DJ has been an every-down player for us right now. Knows what to do. Gives great effort. Believe it or not, Jaheim (Oatis), has got a lot more wiggle than you think he’s got. He’s a guy internally if you leave on guy on him, I mean, good luck. But we’ll package that, Jah-Marien Latham has shown up.”

It’s still early in fall camp and Alabama still has a few more options up front than what Golding already listed who could make a push to join the rotation.

Ultimately, Golding made it emphatically clear that he and the staff will prioritize playing the best pass rushers when the situation arises regardless of what position they play.

“It doesn’t matter. On third down if you’re gonna rush four guys who are your four best pass rushers?,” Golding said. “I don’t give a shit if you call them outside linebackers, d-line, or inside linebackers, let’s get them four guys to rush and put them where we need to put them. And that’s what we’re gonna have to do.”

Developing an interior rush is still on the to-do list but the Crimson Tide’s defense carries lofty expectations once again entering the 2022 season. With the number of returning contributors accompanied by some talented freshmen and transfers, Golding’s unit is viewed to be one of the best in the country.

Right now, Golding wants to keep his focus on how the defense can progress in the right direction each day and shared his humorous outlook on how he feels when he leaves the building.

“To be honest with you I come in every day (saying) ‘How can we improve today?’ When I normally leave this building at night I feel like we’re gonna get our ass whopped,” Golding joked when asked about Alabama’s big expectations. “You know it’s just normally that type of day. And then we show back up the next day and (see) how we can take one step. We’re fortunate to have some good players. They still gotta prepare the right way. Practice their butt off so we can get it on Saturday.

“But we’ve had great players here in the past you know. So it’s buying in, doing the right thing, competing everday, pulling people with you, and let’s see what happens.”

*Get the BEST Alabama football insider information, message board acce.ss, and recruiting coverage today! SIGN UP HERE to unlock our subscriber only content!*