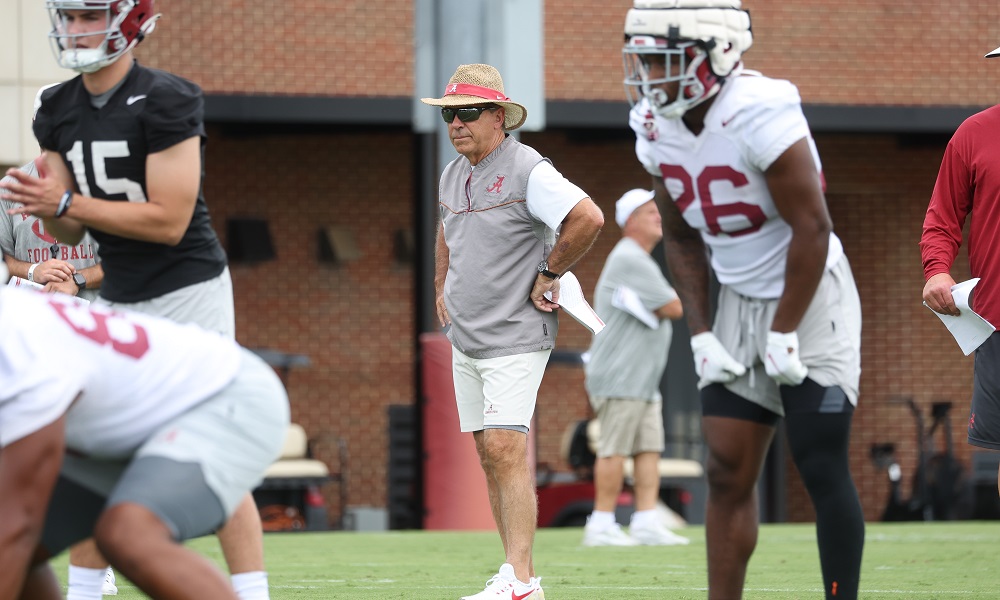 Every head coach throughout sports, whether it’s reported or not, is constantly peppered with offers to leave for new opportunities, especially following heartbreaking losses. Nick Saban was apparently one of those coaches who was offered to leave Alabama according to prior reports that suggested he once considered leaving the Crimson Tide for ESPN following its loss to Auburn in 2013.

Obviously, Saban has remained at Alabama that’s now led him to great success, but the question still remained as to whether he’d ever been tempted to walk away from the dynasty.

During an appearance on the Dan Patrick Show on Friday, Saban answered the question head-on.

“I’ve never been tempted to leave Alabama,” Saban said. “I think that after your journey, we all have journeys in life and you find out about yourself a little bit more in each choice and each decision that you make along the way. I found out when I went back to pro football the last time 15-16 years ago that that was always my ultimate goal to be a head coach in the National Football League. And once I got there, I said I enjoyed the college game a lot because I loved the development of players, personally, academically, athletically, a lot of positive self-gratification in all that.

“So when I got the opportunity to come to Alabama, I was like, ‘This is it for me.’ I’ve really not had a lot of temptation to go any place else. I look at the job here as it’s a rebuilding year every year. You’ve got a new team. You’ve got new players, new leadership, new people to count on. So you’re really starting all over, you don’t need to go someplace else and try to rebuild something because you’re really rebuilding what you’ve got every year.”

As he now enters his 16th season at Alabama and is now a seven-time national champion, Saban is still showing no signs of slowing down. The soon-to-be 71-year-old told Patrick that he has no plans of when he’ll be walking away from coaching.

“I don’t really think about retiring,” Saban said. “I always think about what the heck am I gonna do if I do retire? That’s a scary thought. … I don’t know if that’s hard for people to understand. There’s nothing that I wanna do — like some people wanna go to Europe or go to Scotland and play golf and all that. I wouldn’t mind doing all that stuff, but I don’t have to quit my job to do it.

“I worry about what am I gonna do if I don’t do this? And when I say what am I’m gonna do. I don’t mean play gold or whatever. I mean, how are you gonna get any kind of positive self-gratification and feeling of accomplishment when you’ve done something for so long that you like so much and then all of a sudden it’s not there? So that’s a good question. I don’t really have the answer to that one.”