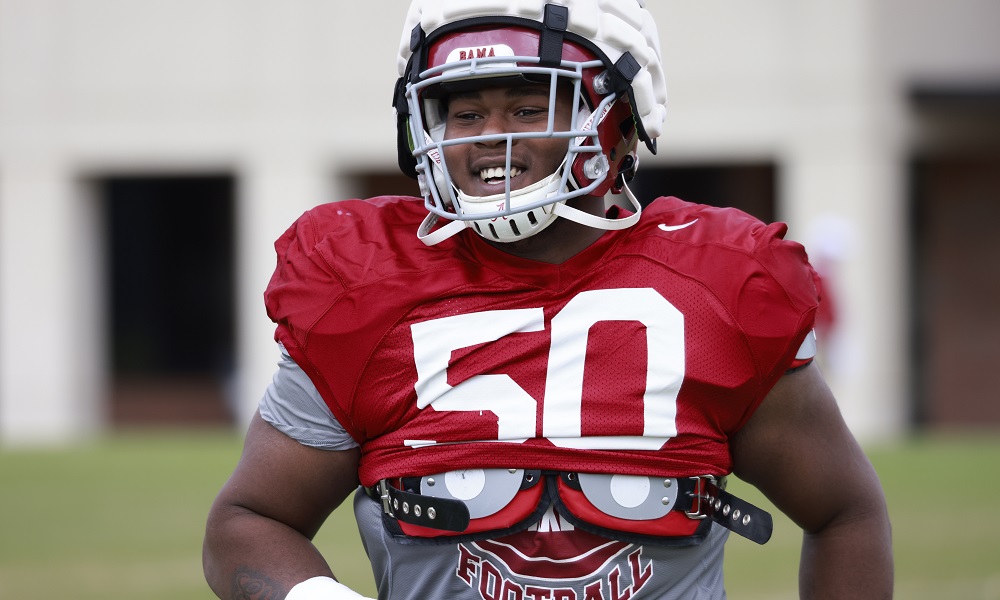 Nick Saban is pushing for something Alabama fans want from its defensive line.

The linebacker position (inside and outside) accounted for 38 of the Crimson Tide’s 57 sacks in 2021, including 26 combined via Will Anderson and Dallas Turner. Coach Saban knows the Tide has great outside linebackers, but he wants to see an inside push to the pocket from defensive linemen to prevent quarterbacks from making throws. Christian Barmore, an Alabama alum, is the most recent force Saban had at nose tackle. He had a team-high eight sacks, 9.5 tackles for loss, and six quarterback hurries in Alabama’s College Football Playoff Championship team in 2020. Before Barmore, the Tide produced headline names including Da’Ron Payne, Quinnen Williams, Marcell Dareus, Jesse Williams, Jonathan Allen, A’Shawn Robinson, and Jarran Reed.

Alabama has experience with DJ Dale, Byron Young, and Justin Eboigbe, but it is developing more depth.

Saban highlighted Jamil Burroughs as the most improved lineman in spring practice. He named Tim Smith, Tim Kennan III, and Damon Payne as others that improved. During its national title runs, the linebackers and defensive secondary for the Tide had help from the front line. Whether it had one unblockable player pressuring a quarterback or several of them, Alabama took pride in collapsing the pocket. On Wednesday, Saban discussed the depth on the line to reporters and what needs to improve.

“Jaheim Oatis has done a really good job,” Saban said. “I think Tim Smith has done a good job. He’s a guy that has been out there playing. The strength of that group is the numbers. We have decent depth. We have to keep developing guys to play with more consistency. We have to do a better job of pushing the pocket inside.”

Young, Dale, and Eboigbe all have a chance to increase their NFL Draft stock. Players such as Oatis, Burroughs, Kennan, Smith, Payne, Jah-Marien Latham, and others want to get on the field. Alabama has a deep rotation up front, but the Tide wants to have the right combination of players to apply pressure.