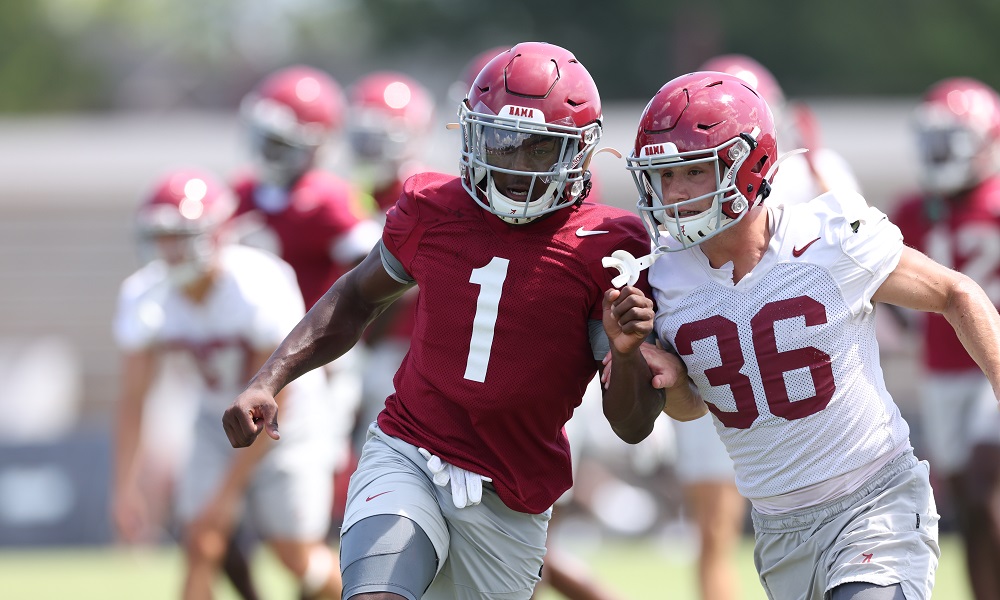 Opportunity presents itself in several different ways, and unfortunately, injury is one of them.

Alabama’s cornerbacks room has been bitten by the injury bug recently as senior Khyree Jackson (groin) and junior Eli Ricks (back) have been sidelined in short term. But with the Crimson Tide’s second scrimmage coming up this Saturday that serves as somewhat of a final audition before the coaching staff begins to decide on starters, sophomore Kool-Aid McKinstry has a big opportunity to separate himself.

In his most recent press conference on Wednesday, Nick Saban said he “can’t tell you who would be the starting corners at this point,” but a big performance from McKinstry on Saturday could help swing the decision in his favor.

Despite entering his second year in the program, McKinstry has some big game experience as he was called upon to step up late in the season with the injuries to Josh Jobe and Jayln Armour-Davis. The Birmingham native started his second career game in the Iron Bowl against Auburn where he made an important breakup in the endzone during overtime which eventually led to John Metchie’s game-winning conversion. He also started in all three of the Crimson Tide’s postseason games where he recorded 12 total tackles on college football’s biggest stages.

Of the players competing, McKinstry has the most experience within Pete Golding’s system despite Ricks tallying the most games at the college level. Prior to his injury, Ricks has still been working towards learning the playbook after arriving in the fall.

Another young defensive back who appears to have thrown his hat into the ring is redshirt freshman Terrion Arnold. Arnold, who didn’t see action last season, has impressed the coaching staff so far through fall camp as he too will have an opportunity to shine this Saturday.

“Terrion Arnold has done a really good job so far in camp,” Saban said on Monday.

But even with Arnold’s push, McKinstry’s experience likely puts him just a leg up at the moment for Saban typically favors the older more experienced players in early competition.

Leading into Saturday’s scrimmage it already appears as if McKinstry is working with the first unit. Members of the media are not allowed to attend practice, but it can be seen in the team-provided practice footage that McKinstry is working against first-team receivers such as Jermaine Burton.

Much like last season, injuries opened up the door for McKinstry to see the field and even if it’s not his preferred route to playing time he’ll surely look to step up for the team when called upon.