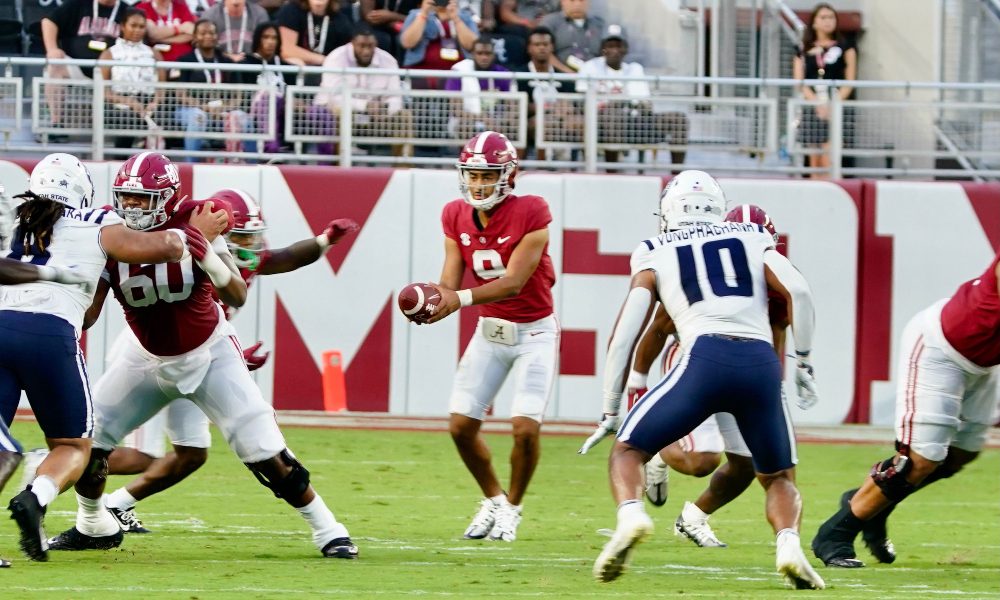 One of the biggest storylines leading into the season was whether or not Alabama’s offensive line would be able to bounce back after a disappointing 2021 campaign.

Although it’s still too early to make any definitive claims regarding the unit as its opponents and competition is still to be had, the group led by new coach Eric Wolford showed some promise Saturday against Utah State.

At the very least if Alabama would not be capable of running the football the offensive line would need to keep Heisman Trophy winner Bryce Young off the ground and that’s exactly what happened. Young was sacked just one time during the game which was allowed by tight end Robbie Ouzts off the edge.

Despite not having a solidified first-team unit as Emil Ekiyor, Javion Cohen and Kendall Randolph all rotated in at guard throughout the first half, the front proved to pick up stunts and blitzes well from the Aggies. Developing a sort of depth on the offensive line has been a positive for Alabama as Nick Saban shared following the game.

“I have, in my mind, seven or eight guys that can play winning football on the offensive line,” Saban said to the media.

Making their first starts on the night were sophomore JC Latham and Vanderbilt transfer Tyler Steen who bookended the tackle spots for the Crimson Tide. Both earned praise throughout fall camp and were able to earn the two starting roles left by Evan Neal and Chris Owens. Each allowed a quarterback pressure against Utah State according to Pro Football Focus, but overall held their own well.

Based off looking at the stat sheet it would be easy to assume that the Crimson Tide’s line dominated in the running game as the team rushed for 278 yards on the day.

But that doesn’t quite tell the full story and it’s still an area that needs some improvement.

Young was the team’s leading rusher on the day carrying the ball five times for 100 yards and a touchdown. But all of the quarterback’s carries came from scrambles on pass plays which included a 63-yard rollout in the first half.

Georgia Tech running back Jahmyr Gibbs had a nice debut with 93 rushing yards on nine carries, but he too had one large 58-yard rush which kicked up his numbers.

Outside of the two big carries, the Crimson Tide didn’t appear quite as dominant against the lesser non-Power Five defense which Saban also touched on in his conference.

“I look at how we ran the ball more as, OK, we had an explosive run — Jahymyr Gibbs. Bryce had an explosive run on a scramble aight,” Saban said. “But what was the down in and down out consistency in terms of how we were successful at gaining, three, four, five yards a crack? That wasn’t what it needed it to be. So that’s something that we need to improve on.”

The full adoption of Wolford’s smash mouth mentality doesn’t quite appear to be fully integrated into the unit as Saban may have hinted during fall camp. But at this point, one game into the season, the group’s performance was a step in the right direction.