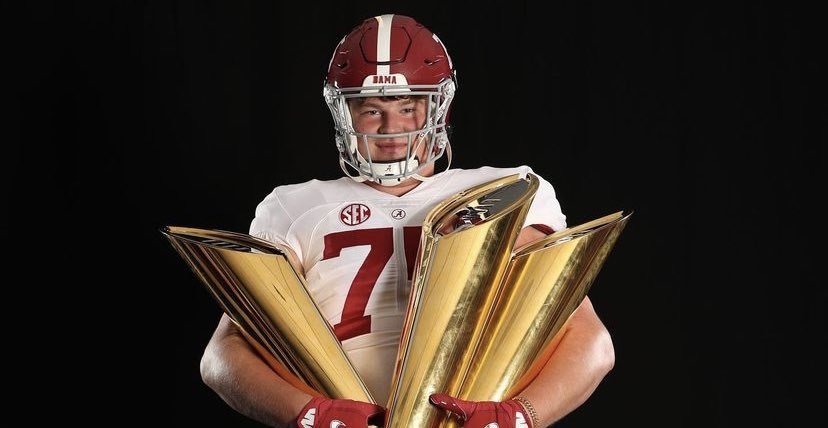 Wilkin Formby is locked in with Alabama football, and he is enjoying every moment of being an Alabama commit.

Formby is a product of Northridge High School in Tuscaloosa. He is considered one of the top offensive tackle prospects in the nation.

The four-star chose to commit to Alabama over Ole Miss, Oklahoma and others in June. He told Touchdown Alabama Thursday he feels like he is currently a part of the Alabama football team.

“I am enjoying it so much, recently, especially because going to games you feel like you are part of the team,” Formby told Touchdown Alabama. “Every time I see the offensive line getting after it with big runs and big pass plays, watching them is like trying to picture yourself every play. I can’t wait for Saturday. It is going to be awesome.”

The Alabama commit could be considered a secret weapon on the recruiting trail for the Crimson Tide. He was the first 2023 offensive lineman to commit to Alabama, and Formby has been actively helping Alabama’s offensive line coach Eric Wolford recruit during visit weekends. The Tuscaloosa product is usually only a call away.

“I am not big on texting people and being on social media,” Formby said. “I will shout people out on Twitter every now and then, but I am big in relationships. I think that is important. If coach Wolfe is like hey another offensive lineman who is not committed is going to be here and I need you to come by so they can have a familiar face, somebody basically already on the team because I am committed. Another great way is my thought process on the commitment. I just explain how I made my decision.”

Wolford was in attendance to watch Formby and Northridge play Bessemer City Friday. Wolford’s relationship with Formby played a huge role in his decision to commit to Alabama.

“We have such a good relationship,” said Formby. “He was probably my second or third offer when he was at Kentucky. I went over to Kentucky a few times and no offense to Kentucky, but the main reason for him. He is a tremendous coach and great drills. I camp with him. I did not know how Alabama was sitting with me at the time, and he moved and just jumped on me.”

Formby will continue to enjoy being an Alabama pledge ahead of his enrollment in the future.