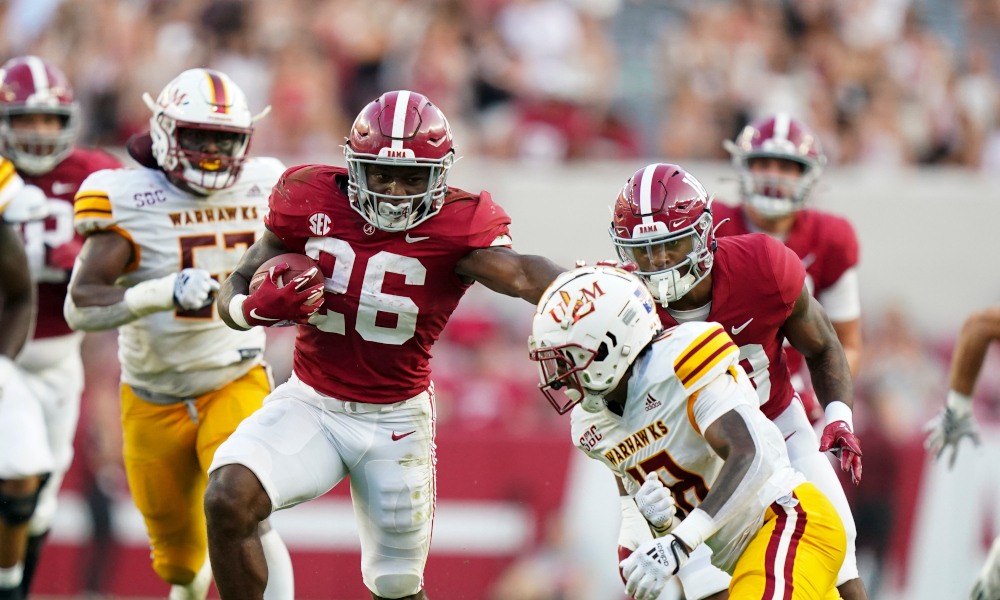 Alabama football is down a running back heading into the Iron Bowl.

Trey Sanders, a former five-star from IMG Academy, entered his name into the NCAA transfer portal. He came to the Crimson Tide from Florida in the 2019 recruiting class. Tide fans had high expectations for Sanders because of his success in high school, but injuries kept him from blossoming into what he wanted to become. His departure leaves Jahmyr Gibbs, Jase McClellan, and Roydell Williams as the Tide’s primary backs, but it opens an opportunity for a freshman to break out more. Coach Nick Saban likes the power, toughness, speed, and contact balance that Jamarion Miller adds to the position. As a native Texan, he became a legend at Tyler (Texas) Legacy High School, totaling 5,000+ yards rushing across four years. He has shown potential through 11 games this season with two rushing touchdowns. Miller averages nearly six yards per rush attempt (5.97) on 30 carries.

Alabama possibly may land Justice Haynes and Richard Young for the 2023 class, but fans want to see more of Miller.

As it prepares for Auburn and its bowl game, the Tide needs to work Miller in more reps. It may lose Gibbs to the National Football League after this season, and McClellan is impressing people more with his abilities. People would have loved for Sanders to stay, but he has to go somewhere to be the featured guy. We could see dose of Miller moving forward.