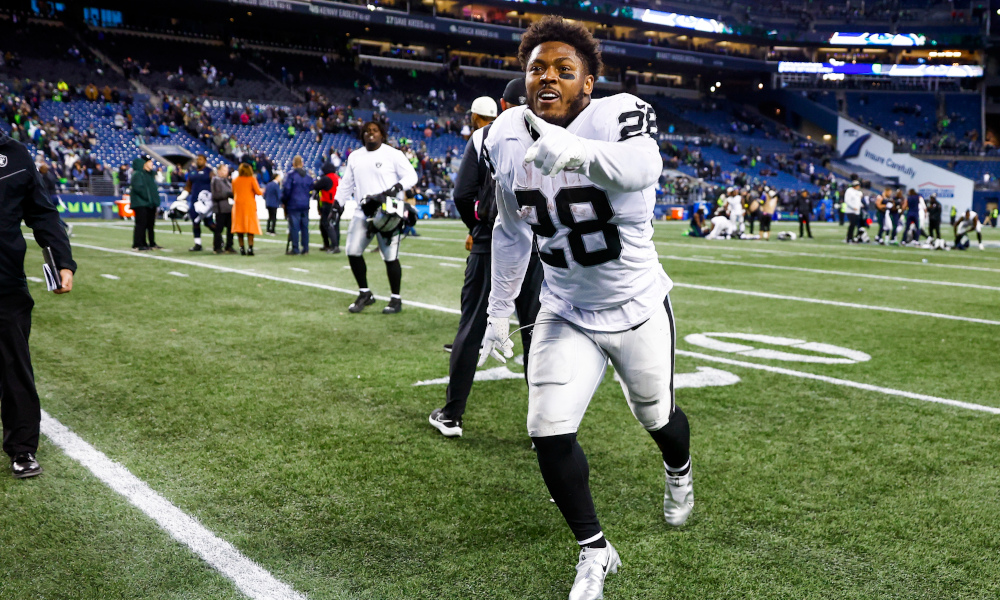 The Raiders have let go of multiple first-round picks since relocating to Las Vegas, but Josh Jacobs has been the staple.

He got selected at No. 24 overall in the 2019 NFL Draft and has been remarkable. Las Vegas is 4-7 on the season, but Jacobs propelled it to its fourth victory in Sunday’s matchup against the Seattle Seahawks. Jacobs silenced the 12th Man in Seattle, pounding the Seahawks and its fans for 303 yards from scrimmage, including 229 rushing yards and two touchdowns.

RELATED: Colin Cowherd believes Alabama should get in over Ohio State after Buckeyes get ‘physically dominated’

Jacobs averaged 6.9 yards per carry and ended the game in overtime with an 86-yard touchdown run.

🗣 We got another big one next week 🗣 pic.twitter.com/AFZ0t8izfR

He shared the team lead for receiving yards (74) on six receptions. Jacobs, a native of Tulsa, Okla., also set a milestone in the National Football League in the Raiders’ 40-34 victory. Ryan Sakamoto, a Raiders beat writer for the Sporting Tribune, reported that Jacobs became the seventh player in NFL history to record 1,200 yards and 7+ touchdowns in each of his first four seasons.

.@Raiders RB Josh Jacobs surpassed 1,200 scrimmage yards on the season – becoming the 7th player in NFL history to record 1,200 yards & 7+ TDs in each of his first 4 seasons:

He joins NFL legends such as Adrian Peterson, Barry Sanders, Earl Campbell, Eric Dickerson, LaDainian Tomlinson, and Terrell Davis in this category. Jacobs has 1,159 rushing yards and seven touchdowns. He has 325 receiving yards on 40 catches, moving him to 1,484 yards from scrimmage. Jacobs has three 1,000+ yard rushing seasons in his young career. He came to the University of Alabama as a three-star in the 2016 class. Jacobs helped the Crimson Tide to two Southeastern Conference Championships (2016 and 2018) and a College Football Playoff National Championship in 2017.