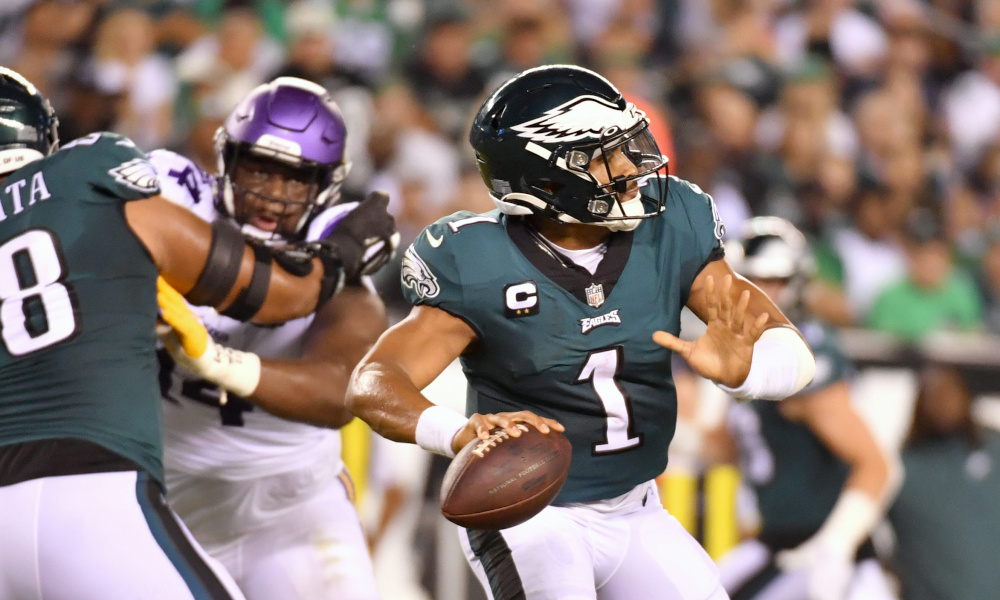 Two college football fan bases are fighting over who Jalen Hurts belongs to.

After his impressive playoff performance last week, Alabama fans and Oklahoma fans are in an uproar on social media about how Hurts belongs to them. David Cone shared a photo to Twitter of Hurts and Richard Todd. The post explained how Hurts is the first Alabama quarterback to win an NFL playoff game since Todd led the Jets over the Raiders in 1983.

Jalen Hurts is the first Alabama quarterback to win an NFL playoff game since Richard Todd led the Jets past the Raiders in the 1983. #NFLPlayoffs #Alabamafootball pic.twitter.com/4XQhx6JAuZ

Charlie Burris, host of A to Z Sports, responded with “Bama benched this dude and he went to Oklahoma and they’re trying to retroactively claim him now that he’s winning in the NFL.”

Bama benched this dude and he went to Oklahoma and they’re trying to retroactively claim him now that he’s winning in the NFL 😂😭 https://t.co/grAjosstdo

You’re skipping the fact that Jalen claims bama too. He lead this team with class, handled everything that happened with class, stayed here to get better after being benched, and then used his last year to get drafted. Mutual respect both ways. We claim him and he claims bama

1) you seem like a miserable person to hang out with
2) Jalen claims Bama, so we claim Jalen. It’s that simple. He literally nearly spent 3 years at Bama. Get over it, he is a Bama guy. Ask him for yourself

Jalen graduated from the University of Alabama

Hurts played at Bama for 3 seasons and graduated from UA. He started for 2 full seasons & has a big trophy case as starter and contributor (even in his final szn, he came off the bench and lead a comeback win vs UGA in the SEC championship). And he still reps Bama in public.

Bama fans never stopped claiming him. They cheered for his success at ou.

He won a NC at Bama. Hell I’d claim them too

He won a NC at Bama. Hell I’d claim them too

Irregardless on what anyone feels, his passing game was developed by LR & Drafted from OU. Some Bama fans & even some OU fans were saying he wouldn’t make it to NFL before his last season. His season at OU made him relevant again, where Bama left his stock plummeting

Sooner all the way https://t.co/4XqYEi4yLT

There was a bunch of fans who didn’t believe lol and I know a few lol https://t.co/WSqHnhGghM

Very Bama of them https://t.co/909ktcPWIt

Nahhhhhh bama y’all made him transfer don’t try to claim him now you bums https://t.co/keTuHbYBIh

Hurts has credited both programs for developing him as a player and a man.

He had a helmet at the Reese’s Senior Bowl with both programs on it.

He speaks highly of Alabama and Oklahoma, though, he sounds like Coach Nick Saban when he talks. Hurts spent three years with the Tide from 2016 to 2018, earning several individual awards, two Southeastern Conference Championships, and a College Football Playoff National Championship. He came off the bench in the second half of the 2018 SEC Championship and delivered Alabama to a 35-28 victory. Hurts marched with his bachelor’s from the University of Alabama before transferring to Oklahoma.

He became a Heisman finalist with the Sooners in 2019, totaling 3,851 passing yards, 1,298 rushing yards, and 53 total touchdowns. Hurts led Oklahoma to a Big 12 Championship and a berth in the College Football Playoff.

Alabama fans say Hurts spent his first three years in Tuscaloosa so they can.

He is cool with both schools and has a Super Bowl on his mind. Hurts is the leader in the NFL’s Most Valuable Player race. He’s turned in an impressive season with 38 total touchdowns. Hurts finished the regular season with 3,701 passing yards, ranking him tenth in the league among quarterbacks. Hurts will lead the Philadelphia Eagles against the San Francisco 49ers in the NFC Championship Game this weekend.