Alabama and Mississippi have met 60 times prior to Saturday’s game at Bryant-Denny Stadium. Alabama leads the series 46-9-2, but for the first time this game will carry more hype than usual.

For Alabama, this will be their second home game. After coming out of gate slow offensively against Virginia Tech and Colorado State, it will be vital for the Crimson Tide to strike early and often in this game. Though the Tide is 3-0 (1-0 in conference) overall and is No.1 in the nation, the team is still trying to find its identity. Thus far, Alabama is 91st in the nation in rushing, averaging just 132.0 yards on the ground. In order to beat Ole Miss, the offensive line must establish their presence from the first play of the game and give the Tide backs a chance to gain yards down field. Defensively, Alabama is 36th in the nation, surrendering 19.3 points per game.

As for Mississippi, it seems like for the first time since 1970 (Archie Manning era) and the early 2000s (Eli Manning era) that swagger is back in Oxford, Miss. Part of this is due to head coach Hugh Freeze and his ability to recruit well. Ole Miss brought in the No.5 ranked recruiting class in the nation this offseason and it has really paid off for them thus far. Highly-touted recruit Robert Nkemdiche will look to make his presence felt against the Tide on the ground, while his elder brother, Denzel Nkendiche will make his second appearance against the Tide from the linebacker position. Last season, he totaled 11 tackles, a sack and two forced fumbles.

Offensively, Mississippi will enter Saturday’s matchup with a potent running game (250.0 yards per game) and an up-tempo offense that scores in bunches (averaging 38.0 per game). Though quarterback Bo Wallace is 10th in the SEC in passing yards (648) thus far, he still poses as a threat to the Alabama defense. He may not be the fastest guy in the world, but he’s fast enough to run Freeze’s zone-read, zone-option offense. As a passer, Wallace is very efficient. So far he is completing 64.4 percent of his passes for four touchdowns with a quarterback rating of 142.1.

While everyone is going nuts about Todd Gurley being the best running back in the conference, don’t sleep on Jeff Scott. Though he’s a lightweight at 5-foot-7, 167 pounds, Scott is a very talented back. He has a lot of speed, quickness and toughness. He has great vision that allows him to help set up the hole or cutback lane that he wants to go in. Many people witnessed his ability to hit another gear and really take it to the endzone in the Vanderbilt game. Thus far, Scott is seventh in the SEC rushing, averaging 35 carries for 330 yards (9.4 yards per carry) and two touchdowns.

The difference between this season and last season was Ole Miss didn’t have many talented, physical receivers outside of Donte Moncrief. This season, they do and don’t think for a second that Mississippi won’t test Alabama’s defense through the air.  Last season, the Tide’s secondary did a great job defending Moncrief. He had just two receptions for 37 yards. This time, Moncrief must be able to create separation and find holes in Alabama’s defense in order to help out Wallace and make plays in this game.

At 6-foot-3, 226 pounds, Moncrief is very physical at the line of scrimmage and is able to fight off jams. He does a great job of high-pointed the football and making the tough catches in traffic. He also has pretty good speed. Thus far, he has 11 receptions for 173 yards and two touchdowns. Along with Moncrief, Evan Engram and Laquon Treadwell have to put in a good day receiving as well if Ole Miss wants to really attack this Alabama secondary. Both Engram and Treadwell are physical receivers at 6-foot-3, 200+ pounds. Like Moncrief, both can locate the football and both have tremendous speed to go along with great hands.

In order for Alabama to win this game, they must excel at three things offensively and three things defensively. On offense, the Tide must control the battle in trenches, time of possession and third down conversions. Defensively, Alabama must contain Scott, pressure and sack Wallace multiple times and force three and outs consistently.

AJ McCarron has to play a very efficient game. He can’t afford to make a bad decision and if a throw is not there, he has to throw the ball away and play the next down or tuck it and try to get a positive gain. For TJ Yeldon, this could be his best game of the 2013 season. In order for that to happen, he has got to follow his blockers up front and use his vision to set up the holes he wants to run through. Ball security will also be important for Yeldon; he can’t afford to fumble the football in crucial moments.

With DeAndrew White healthy and having a good season thus far, Amari Cooper may finally be able to have his best game of the season. Remember it was against Ole Miss last season that he unveiled his talents to the Alabama faithful and the nation. He had eight receptions for 84 yards and two touchdowns in the game last season. Also for Ole Miss, they need to be on the lookout for Christion Jones in this game. He is not only having a great season receiving thus far, but he is a game changer on special teams. He had a kick return for a touchdown last year in this matchup and has two special teams’ touchdowns so far this season.

Every game in the SEC is a statement game, but for Hugh Freeze and Ole Miss a win against Alabama would put them at 4-0 for the first time since 1970.  A win would give them their first victory in Tuscaloosa since 1988 and their first victory against a  No.1 team in program history.  The last time Ole Miss defeated Alabama was in 2003 (43-28).

Mississippi is already coming in talking trash about how they are going to pull a Texas A&M on Alabama. They are coming in with a lot of hype, pride and swagger, but for the two-time national champions their confidence must lie in communicating well with each other and getting off on a good start offensively if they want to beat Ole Miss. The boys in Vegas are giving the Tide another try; they are predicting this game to be a 17.5 point spread in Alabama’s favor. Can the Tide cover the spread or will we have another game that will have us on the edge of our seats? 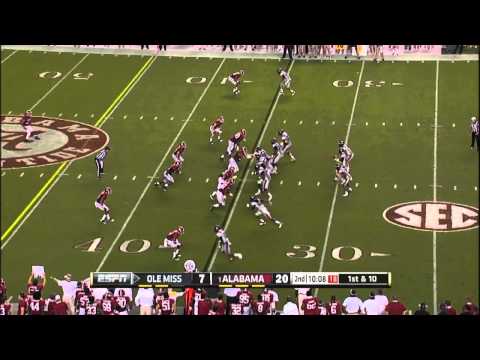