Defense [B-] – After getting torched for over 600 yards (628 yards) of total offense against Texas A&M, Alabama’s defense was back in action against Colorado State. They held the Rams to just 51 yards rushing (2.0 yards per carry) and forced a turnover, but surrendered 279 yards of total offense. The Crimson Tide gave up 13 first downs to Colorado State and couldn’t keep their offense off the field. The Rams possessed the ball for over 30 minutes (31:10). In order for the Crimson Tide’s offense to be successful, the defense must be able to force three and outs consistently against the opposing team. Alabama’s defense held the Rams to a 26 percent third down conversion percentage, but they still gave up 13 first downs to Colorado State.

Offensive Line [C] – After a phenomenal performance against Texas A&M, in which they completely dominated the line of scrimmage and helped Alabama total over 500 yards of offense (338 yards against Colorado State), the offensive line struggled against Colorado State. Give Jim McElwain the Rams’ defense a lot of credit. They really held their own and pushed the Crimson Tide. Against Texas A&M, the Tide totaled 234 yards on the ground. However, they only amassed 66 yards rushing (Yeldon 49—Fowler 10) against Colorado State. Despite the tremendous pass blocking for AJ McCarron, Alabama’s bread and butter is to pound the ball to open up the play action pass. With its inability to successfully run the football, the Crimson failed to control time of possession.

AJ McCarron [B+] – It wasn’t the explosive game that he had against the Aggies, but McCarron got the job done. He put together some good drives and despite the offense sputtering a bit, he tossed the touchdown pass to DeAndrew White that finally put the game on ice in the fourth quarter. Most of his reads in the game were accurate with the exception of the interception he threw in trying to target Kenny Bell. In recent years, we would normally see him throw the ball away if nothing is there or pull the ball down and try to pick up yards. As far as statistics are concerned, McCarron played well. He was 20-26 (76.9 percent of passes completed) passing for 258 yards, one touchdown, one interception. Blake Sims got an opportunity to come in for some mop up duty in the fourth quarter and threw his first touchdown pass of the year to Chris Black.

Receivers [A] – With Amari Cooper out because of an injury, many wondered who was going to be the target to step up? Insert White, Christion Jones and O.J. Howard into the equation. Since returning from injury last season, White has become the leading receiver for Tide. He had two receptions for 65 yards and a touchdown. Jones put in a great game receiving as well. He totaled nine receptions for 90 yards and freshman tight end O.J. Howard continues to grow and impress. He had three receptions for 38 yards. Though Chris Black only had one reception, it was for a 14-yard touchdown to help Alabama seal the deal 31-6.

With Yeldon suspended for a quarter, Kenyan Drake stepped up and provided and some huge plays in this game. Though he didn’t have a big game on the ground, he did rush for a touchdown, and blocked a punt which was recovered by teammate Dillon Lee for a 15-yard touchdown.

If one thing is for certain, it’s the fact that Alabama truly let Vegas down by not fulfilling the point spread. The Tide’s offensive came out of the gate slow. They cannot afford to this when Ole Miss comes to town. Unlike Colorado State, Mississippi has a very talented team who can make you pay when you don’t cash in on your opportunities.

For Colorado State, I know McElwain would have loved to walk out Bryant-Denny Stadium with a win, but he has to be proud of his offensive in their ability to move the ball against Alabama’s defense. His defense did a fine job of giving the Tide’s offense problems in the run game. The Rams controlled the ball more in the game and achieved a better third down conversion percentage than Alabama (Colorado St. 26 percent—Alabama 20 percent).

For Alabama, they are still trying to figure out what their identity is for this season. One thing for sure this is not last year’s team and for Crimson Tide they must adapt and by in to the process of Saban’s system if they want to have a successful season. As of right now though, the Tide is still No.1 in the nation. The question is when Ole Miss comes to town, will Alabama’s offense come out of the gate fast or will it be a repeat of Virginia Tech and Colorado State. 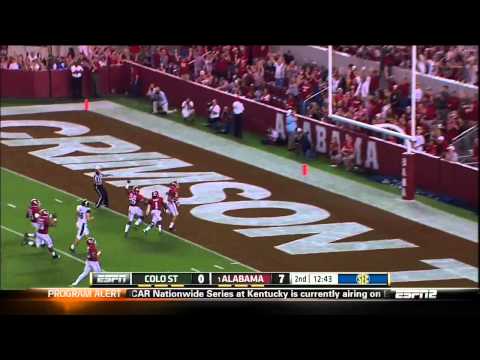