Defense [C] – Let’s be honest here. It’s highly difficult to simulate Auburn’s run game in practice. The Tigers came into this matchup ranked second in the nation in rushing (320.3 yards per game) for a reason. Give Auburn’s offensive line and the play calling of Gus Malzhan a ton of credit. The Tigers really had Alabama’s defense off balance for much of the game. Before Auburn, the Tide’s defense allowed just 91 yards rushing per game. Against the Tigers, Auburn shredded Alabama’s defense for 296 yards (Nick Marshall 99 yards and a touchdown & Tre Mason 164 yards and a touchdown) on the ground.

The  Tide’s defense stayed on the field a lot and allowed the Tigers to convert 8-15 (53 percent) on third down. Alabama gave up 393 yards of total offense and 22 first downs. During the pre-game, there was much chatter of could Marshall pass the ball effectively against Alabama’s defense. The questions were answered. Marshall went 11-16 (68.7 percent of passes completed) passing for 97 yards and two touchdowns. Just three positive things happened for the Tide’s defense in this matchup. They sacked Marshall three times, forced a turnover and make multiple, critical stops late in the game.

Offensive Line [C-] Auburn’s front four on the defense deserves a ton a credit. They were physical and took the game to the Tide’s offensive line. Outside of the 50-yard run from TJ Yeldon to start the game, Alabama had a terrible time trying to establish the run game in the first half. Despite getting just one sack, Auburn did a fine job of getting in the face of AJ McCarron. Though the Crimson Tide totaled 495 yards of offense (277 passing & 218 rushing), silly penalties once again hurt them. Give Auburn’s fan base a lot credit. They made it difficult for the offensive line to hear the snap count, especially Center Chad Lindsay. On some Alabama drives, he had a monster of a time trying to snap the ball up to McCarron.

Receivers [B-] Ladies and Gentlemen, Amari Cooper is no longer null and void. He’s back and was back in a huge way for the Tide against Auburn’s secondary. Despite Alabama’s receivers dropping some passes early on, Cooper really made his mark in this matchup. He’s had a lot of buildup game prior to this one, but this became the one where fans saw the Cooper from last year come out. His toe looks very healthy. He ran crisp routes and really aggravated Auburn’s secondary. Cooper had six receptions for 178 yards (29.7 yards per catch), including a 99-yard bomb from McCarron for a touchdown. Kevin Norwood got in on the action. He totaled three receptions for 45 yards (15.0 yards per catch) and a touchdown.

Running Game [A] – One thing Alabama fans have to give Yeldon credit for is his toughness. He was not 100 percent ready for this game (ankle injury), yet he played his heart out. His movements weren’t as crisp as usually due to the ankle injury last week, but he still found a way to get his job done. The backs as a whole didn’t turn the ball over and Yeldon totaled 26 carries for 141 yards (5.4 yards per carry) and a touchdown. Though Kenyan Drake amassed four carries for 33 yards, he was not on the field at all in the second half. The question as to was he injured in the first half or if Nick Saban felt Yeldon would give the Tide a better edge remains to seen. When the O-Line was able to provide holes upfront, Yeldon was able to hit them well enough and get downfield.

AJ McCarron [A-] – This loss should not put McCarron out of the Heisman race. As a fifth year senior and a leader on this team, McCarron left his all on the field against Auburn. Despite some inaccurate throws early on, he did exactly what every leader is supposed to do. He remained calm, got in a rhythm passing and kept Alabama in the game. He didn’t force anything; instead he either threw the ball away or picked up yards on the ground with his feet. On the possessions where the Tide was backed up on its on 1-yard, McCarron led them down the field beautifully. As for his numbers, McCarron was 17-29 (58.6 percent of passes completed) passing for 277 yards and three touchdowns.

It was mentioned in the preview that three aspects would be pivotal in this matchup: third down conversions, special teams and quarterback play. While both quarterbacks played well, Auburn destroyed Alabama on third down conversions (Auburn 53 percent—Alabama 31.7 percent) and special teams. It was a rough, rough day for Cade Foster. He was 0-3 on field goals. Foster made a 28-yard field goal, but it was called back because of a false start penalty.

While everyone blames special teams for the loss, the blame truly goes on the shoulders of Saban’s play calling. Yes, as a kicker it is Foster’s job to produce points, but when you have a fifth year senior at quarterback who is 35-2 as a starter (prior to this game) and is a Heisman front-runner, you put the ball in his hands and let him go to work.

Gus Malzahn put the ball in the hands of his playmakers in crunch time and they came through for him. Instead of giving the ball to McCarron, Saban tries to run it with Yeldon. Auburn did a phenomenal job stacking eight to nine guys in the box and stuffed the run. Yes, Alabama’s defense didn’t play up to par, but they gave the offense plenty of opportunities to seal the game away and the Tide couldn’t do it. You can’t expect to put the game in the hands of a freshman kicker and believe that he can knock in a 57-yard field goal.

For Auburn, Malzahn needs to take three players out for a steak dinner. Tre Mason, Nick Marshall and Chris Davis, Jr. played well against Alabama. The Tigers got another prayer answered at Jordan-Hare Stadium as Davis returned a Tide missed field goal for a 109-yard touchdown. Auburn will now look to face off against Missouri for the Southeastern Conference Championship and a shot to play for a national title.

It is simply amazing how history repeats itself. In 2010, Auburn got a junior college (Blinn College) quarterback in Cameron Newton. This season, they recruited and brought in Nick Marshall (Garden City Community College). Both quarterbacks have helped Auburn secure and Iron Bowl victory.

As for Alabama, this loss hurts. This is why special teams’ is the “lost art” of college football. The teams that excel in it are successful and the ones that don’t, fail miserably. The Crimson Tide allowed Auburn to hang around in the game. When you allow teams to hang around, they will come back and bite you. Saban was too conservative in his play calling and it cost Alabama. The lone hope for Tide fans is prepare for the All State Sugar Bowl or whatever BCS bowl the system places the Tide in. The only shot left for Alabama to get to Pasadena is if Auburn, Ohio State and Florida State lose. 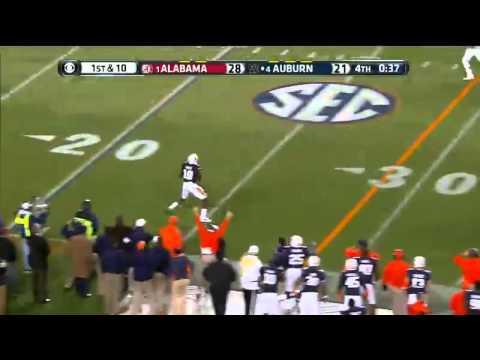