Last season, it was the Jekyll and Hyde effect that plagued Alabama’s defense. The Crimson Tide dominated teams with talented players, but struggled against programs with dual threat quarterbacks and no-huddle offenses.

Despite its offense getting an upgrade with Lane Kiffin, Alabama fans have known the Tide for its dominating defense. Since 2008, Alabama’s defense has been tops in the Southeastern Conference and the nation.

Defensively, Alabama finished fourth in the nation in 2013. The Tide surrendered 13.9 points per game. For a defense that’s usually potent against the run, Alabama managed to allow 106.2 yards per game. One aspect the Tide did improve in was pass defense. Alabama allowed 13 touchdowns, but forced 11 interceptions last season.

Next season has all the makings of being a great year for Alabama’s defense. With the hiring of Bo Davis and the recruiting class brought in, the Tide is poised to reclaim its standard on being the best defense in college football.

One issue Alabama solved this offseason was lack of depth on the defensive line. The Tide struggled with keeping fresh bodies on the field last season. Alabama returns Jonathan Allen, A’Shawn Robinson, Brandon Ivory, Darren Lake and others to the fold in 2014. With this experience added to having D.J. Pettway, Jarran Reed and Da’Shawn Hand on the gridiron as well, Davis will have plenty of talent to work with and bodies to rotate on the line.

The mark of a great defensive line is its ability to create pressure on an opposing quarterback. Alabama has lacked a pass rush specialist since Dont’a Hightower and Courtney Upshaw. The Crimson Tide generated just 22 sacks in 2013.  On paper, having 22 sacks looks good; however, it doesn’t add much appeal when the leader is a true freshman (Robinson: 5.5 sacks). Robinson, Allen, Pettway, Reed and Hand will look to bring back the pass rush ability to Alabama’s defense.

On one hand, the Tide’s defensive line has depth, but the strength of this team comes from the second level, the linebackers. With CJ Mosley and Adrian Hubbard gone, the quest to find the next leader at linebacker for Alabama starts now. Having Trey DePriest, Xzavier Dickson, Reggie Ragland, Reuben Foster and others return next season makes the decision easier.

Despite DePriest recording 65 tackles and two sacks last season, Nick Saban and company are very high on Dillon Lee as the potential leader of the group. What Lee brings to the table is that old school, aggressive linebacker mentality.  He is a hard hitter who knows how to find the ball. Lee recorded just 16 tackles last season, but he is anticipating a breakout year in 2014.

Like the defensive line, Alabama has depth at linebacker too. Along with the usual suspects, the Crimson Tide has Rashaan Evan, Christian Miller and Shaun Dion Hamilton.

Following gap assignments burned Alabama last season. In matchups against spread offenses, the linebackers failed to read the play completely and follow the ball. The Tide got caught in the deceptions of opposing quarterbacks and didn’t stay at home to defend the play. What makes linebackers successful in college football is the ability to get everyone set on defense, dissect where the ball is going and make tackles.

Injuries and off-the-field issues early in the season caused Alabama’s secondary to look a bit suspect last season. This will not be the case in 2014, as the Tide returns Landon Collins, Eddie Jackson, Geno Smith, Cyrus Jones and others to Tuscaloosa. With the additions of Tony Brown, Marlon Humphrey and Laurence “Hootie” Jones, Alabama will look to have a very potent secondary.

With Ha Ha Clinton-Dix and Vinnie Sunseri gone, Collins is the leader of the secondary. He finished second on the team in tackles last season (70) and recorded two interceptions. Geno Smith totaled 10 tackles and will be moved to safety next season. Both Collins and Smith are hard hitters. They do a good job of reading the quarterbacks eyes and making plays on the ball. Both guys are physical with receivers and know how to use the sideline as an extra defender.

The battle for starting cornerback will be interesting. Saban likes his corners to be physical with receivers and play the ball in the air. Cornerbacks have to be able to take away the inside leverage and force the quarterback to throw over the top of them.

Jackson, Jones and Bradley Sylve will get a lot of reps at corner, but don’t be surprised if Brown or Humphrey starts as well. Both guys are five-star prospects for a reason. They have tremendous upside and great ball instincts. Both guys have speed and can deliver hits on physical receivers.

In 2013, Alabama’s defense was good, but when it came down to crunch time you could see the cracks in the armor. With the players working hard in spring practice to build chemistry and fire from Saban and staff to create more intensity, Alabama’s defense is poised to return striking fear in the hearts of opposing offense next season. 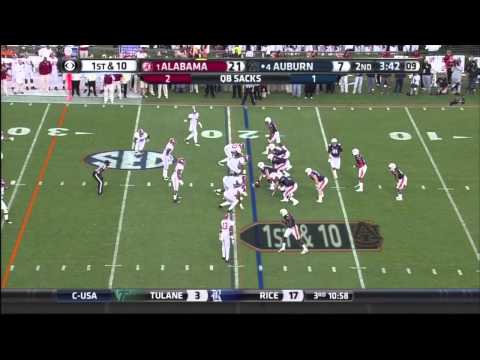