Defensive Line [B]- Alabama didn’t generate a lot of sacks, but the defensive line affected Southern Mississippi’s quarterback Nick Mullens. Ryan Anderson recorded the Tide’s lone sack.  Anderson, Xzavier Dickson and Jonathan Allen forced Mullens to get rid of the ball before he was ready to. Anderson, Dickson and Allen combined for 6 tackles and seven quarterback hurries.

Linebackers [B]- Trey DePriest led all linebackers with six tackles. DePriest look good in his second game back from suspension. He made the right calls on the field and got everyone in position defensively. Rashaan Evans totaled two tackles and Reuben Foster made into the stats column with one tackle.

Secondary [C]- Aside from Landon Collins, Alabama’s secondary must improve on tackling and playing the ball. Collins led the team with 12 tackles. Geno Smith collected four tackles and Maurice Smith had three tackles. Nick Perry got ejected in the third quarter (targeting foul), but recorded one tackle in the contest.

Summary: Alabama didn’t give up a touchdown to Southern Miss. The Crimson Tide surrendered 56 yards rushing and 263 yards of offense. Despite the good, Alabama needs to improve on tackling in space. Nick Saban and defensive coordinator Kirby Smart pride themselves on having a sound defense. The Crimson Tide missed too many tackles against West Virginia, Florida Atlantic and Southern Mississippi. It takes more than size and speed to be an effective defensive back. The Tide’s defensive backs must do a better job of playing the ball and being physical with opposing receivers.

Adam Griffith [A]- He didn’t get much work against the Eagles, but Griffith was efficient on the field. Griffth connected on seven extra-points. He made a 30-yard field goal in the 4th quarter, expanding Alabama’s lead 45-12. Griffith totaled seven kicks for 434 yards with one touchback. He averaged 62.0 yards per kick.

JK Scott [A]– Scott recorded one punt (34 yards) against Southern Miss, but it pinned the Eagles inside the 20-yard line. He displayed a strong leg on kickoffs. Scott had two kicks for 130 yards with one touchback. He averaged 65.0 yards per kick.

Coverage [C]– Effective kickoff/punt coverage sets the tone for a defense. Alabama had moments where players would wrap up and tackle well, but also had situations where tackles were missed. The Crimson Tide must be aware in the return game too. Christion Jones has to to a better job of calling off teammates when a punt is bad.

Summary: Adam Griffith and JK Scott answered the bell this week. Both guys were efficient on the field. Alabama can’t afford to arm tackle opposing players. The team needs to starting wrapping up and negating huge plays from opposing teams.

Blake Sims [B]- Alabama started slow offensively, but the pace picked up as Sims developed more rhythm. He tossed a few deep passes against Southern Miss, but hesitated when throwing them. Sims has to learn to trust his arm and deliver the ball quickly to open receivers.  He footwork in the pocket continues to improve. Sims is making smart decisions with the ball, but he needs to time his passes better. Overall, Sims completed 70.5 percent of his passes (12-17) for 168 yards and three total touchdowns (one rushing).

Jake Coker [B]- Sims has displayed more confidence, but Coker got in some work against the Eagles. Coker has a strong arm, but he has to improve on guiding receivers with solid passes. He missed Raheem Falkins on a deep ball against Southern Miss. If Falkins catches the pass in stride, Alabama scores on the possession. Overall, Coker went 5-7 passing  (71.4 percent) for 46 yards.

Summary: After the game, Saban said Sims looks more confident. Alabama is going to work both quarterbacks until someone takes the reins. Blake Sims performed well this week. He has to continue to be accurate with the ball and time his passes correctly. Jake Coker needs to become more familiar with the play calls and audibles. He has to learn how to throw the ball when nothing is available.

Kenyan Drake [A]– Alabama’s great contrast is a difference maker whenever he touches the ball.  Kenyan Drake accounted for three scores against the Eagles. He displayed vision and speed in the hole, but also toughness running behind his pads. Drake finished second in yards with 59 and averaged 6.6 yards per carry.

Summary: It was another group effort for Alabama’s backs. No one rushed for 100+ yards, but four players rushed for 50+ yards. Derrick Henry led all backs in yards with 73. T.J. Yeldon totaled nine carries for 56 yards, but missed the second half because of a hamstring injury. Tyren Jones is the team’s 4th string back, but he played a starter Saturday. Jones led all back in yards per carry average (8.1) and rushed for 57 yards with one touchdown. Alabama’s backs totaled 333 yards rushing.

Amari Cooper [A]– Amari Cooper is having a huge year so far. He posted his third 100+ yards receiving performance against Southern Mississippi. Cooper ran crisp routes and was difficult to tackle in space. He finished with eight catches for 135 yards and a touchdown. Cooper has 33 receptions for 454 yards and two touchdowns in 2014.

Christion Jones [A]- Saban and company want more players involved offensively. Christion Jones got the memo. Jones pulled in four passes for 50 yards. He did a nice job of making catches in traffic and getting up field.

Brian Vogler [A]- Alabama fans wondered if tight ends existed in this offense after the the first two games. Brian Vogler aswered the question with a resounding “Yes.” Vogler has one reception, but it was a 9-yard touchdown grab from Blake Sims. Vogler’s touchdown reception lengthened Alabama’s lead to 35-9 in the third quarter.

Summary: Amari Cooper had a great game, but there are more play makers on this team. Saban and Kiffin want to get everyone involved offensively. DeAndrew White should be back for next week’s matchup against Florida.

Preseason is over for Alabama. The battle starts next week as conference play opens up and the Gators come strolling into Tuscaloosa. Florida will be much improved from last season. It will be up to the Crimson Tide to play a quality game for four quarters.

Alabama has gotten away with missed tackles against sub-par teams, but it will haunt the Tide in conference play if they don’t improve. 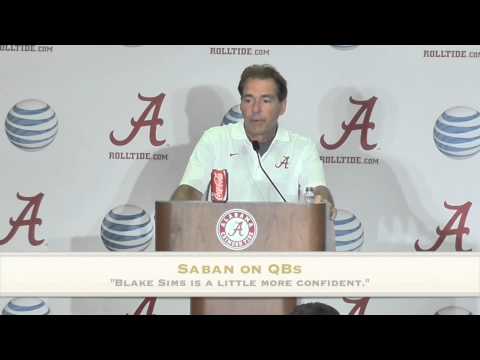