It’s a great quote. It sounds awesome on television, but it means nothing if a quarterback is satisfied with being good.

It recruits well, but Alabama targets three main positions: running back, linebacker and receiver. To Gainesville High School (Georgia), Blake Sims was a superstar. At Alabama, he was another player trying to find his role. Sims arrived on campus as a redshirt freshman in 2010.

Mark Ingram was the Crimson Tide’s featured back. He won a Heisman Trophy in 2009. Trent Richardson was a fan favorite. He and Ingram gashed Texas’s defense in the 2010 national title game. Eddie Lacy had a laugh that lit up a locker room. He wasn’t going to be overlooked. It was nearly impossible to play Sims at running back, yet it happened.

Ingram went to the National Football League in 2011. Sims settled in behind Richardson and Lacy. He appeared in five games and showed promise as a change of pace back. Sims averaged 4.9 yards per carry. He totaled 107 yards on 22 carries.

Change happens. The great ones embrace it. The slackers play catch up. AJ McCarron entered his second season as Alabama’s starting quarterback in 2012. Sims was a member of the Crimson Tide’s 2011 national championship team, but he wanted a bigger role.

Sims became Alabama’s backup quarterback as a sophomore. Blowout victories are fun, but it doesn’t help the case of finding an identity for a future starting quarterback. Sims scored his first career touchdown as a runner against Arkansas. His feet were promising. Sims’s arm left little to be desired. He registered 187 yards rushing and two touchdowns. Sims threw for 77 yards.

Winning is valuable, yet it brings conflicting emotions. Sims was proud of Alabama’s accomplishment. He was a member of two national title teams. Sims smiled and laughed with his teammates, but a battle was brewing internally.

Does winning matter when there is no self-identity? No. Alabama was winning, but Sims wasn’t doing much. Sims was a part of the trophies and banners, but displayed little effort in contributing. He wanted to do more, but how could he? Sims was in the shadow of McCarron, one of the best quarterbacks in Alabama history.

2013 would reveal the same tape. No. 10 would lead Alabama. No. 6 was stuck holding a clipboard and waiting. Crimson Tide fans saw Sims in eight games, but it was in blowout victory situations. Georgia State provided Sims with his first piece of adequate playing time. He was under center for an entire half against the Panthers. Sims showcased some arm talent and tossed for 130 yards. He finished 2013 with two touchdown passes.

It’s supposed to be a time of rest and relaxation, right? Please, this is Alabama football. The only rest head coach Nick Saban gets is coffee, morning news, and the occasional love channels with his wife, Terry Saban. Alabama is the epitome of college football even in the offseason.

Alabama didn’t win a national title in 2013. Fans didn’t like it, but their concerned shifted toward the quarterback position. McCarron was now in the NFL. The real war had begun.

Sims, Alec Morris, Cooper Bateman, Luke Del Rio and Parker McLeod all wanted to be the next trigger puller.  Morris and Del Rio spent the entire 2013 season huddled around McCarron. It was preconceived that one of them would start.

Bateman was considered a stud coming from Cottonwood High School (Murray, Utah). A former four-star prospect, Bateman was one of the top quarterbacks nationally in the 2013 class. He possessed a strong arm, but lacked accuracy. McLeod was another Georgia product floating around. He had a decent arm, but his ceiling wasn’t high enough.

It breeds winners, but competition also weeds out cowards. Auburn represented the Southeastern Conference in the 2014 national title game. Florida State captured its third national championship in program history. Both accomplishments took a back seat to Alabama’s 2014 recruiting class. Of Alabama’s 27 commits, 25 were four and five-star players.

Skill players are nice. Defensive players are even better, but the microscope still lands on quarterbacks. David Cornwell and Jake Coker became sole possessions of Alabama. Both players were 6’5” and displayed a lot potential.

Is height really a big deal? It shouldn’t be, but people couldn’t tell from the reactions of Del Rio and McLeod. Seven players started in the battle, but competition dropped it to five.

Daniel Powter. He knows what we go through. He understands every tear and profane word. It’s clearly documented in his song “Bad Day.” Powter understands us, but he identified more with Blake Sims on April 19, 2014.

A spring game is another exhibition matchup for most teams, but Alabama fans view it as another quest for a championship. He thought he was ready. His teammates and coaches thought he was ready. The average fan knew Sims wasn’t ready. He had a bad day. Was Alabama’s play book fully used? No. Was Sims used to his fullest extent? No. Neither of these questions matter because at Alabama people crave results. Sims threw two interceptions on A-Day. The writing on the walls became clear. Crimson Tide fans wanted to see Coker.

Rejection hurts in dating, but it pains in sports. The weak have a pity party. Legends use rejection as fuel. Sims was involved in quarterback camps throughout Alabama’s offseason. He challenged himself to work harder and grow stronger. Sims entered a gym with a mission. He wanted a stronger arm. Sims engaged himself in a film room. He wanted to correct his mechanics.

Jake Coker is a star in the making, but Sims wanted this moment. Sims, Coker, Morris, Bateman and Cornwell all threw tight spirals. Sims wanted his tighter. He desired keen decision making. The five gladiators battled through fall practice. He started slow, but Sims ended strong. Coker remained an offseason conversation, but Sims was about to get his chance. A chance he had dreamt about since coming to Alabama.

Fairytales are sappy, but it gains respect for proving naysayers wrong. Alabama was coined to win a national title with Coker at quarterback. Many analysts and fans penciled Alabama as a three or four-loss team with Sims under center.

Aug. 30, 2014 was Christmas for sports lovers everywhere. It was the return of college football, and for Alabama it was the dawning of new era. Sims took his first snaps as Alabama’s starting quarterback against West Virginia. Fans were glued to the screen. Social media became bipolar.

Cheers occurred on each good play. Frustration set in with each incompletion. It was a firestorm, yet Sims pulled through. He completed 72.7 percent of his passes (24/33) for 250 yards. Sims threw one interception, but he didn’t give the game away. Alabama won 33-23.

Confidence grew with each game. Sims had a swagger in his step. He had confidence in his teammates as well. Sims encouraged Coker. He embraced Coker after watching him toss his first collegiate touchdown pass as an Alabama quarterback against Florida Atlantic.

Sims had won his teammates and coaching staff over with his play. It takes more than three games to win over a passionate fan base. He knew it would take time, but it wouldn’t be long before Sims would have Bryant-Denny Stadium screaming his name.

Nothing is better than SEC competition on a Saturday afternoon. Bryant-Denny Stadium was the venue on September 20, 2014. The Florida Gators had a sputtering offense, but a strong defense.

Sims had guided Alabama to a 3-0 record, but he still had something to prove. The sun was shining and Sims’s arm was ready to ignite. Crimson Tide fans didn’t think it was possible. Their jaws dropped. The unthinkable happened. Sims went on an aerial assault against Florida’s secondary. He lit them up back and forth. All offseason it was said that he couldn’t throw. Sims torched Florida for 445 yards and four touchdowns.

Students rejoiced. Alumni members thought it was a dream. Verne Lundquist and Gary Danielson couldn’t keep their voices down. He was having a masterful day, but Sims witnessed a shocking event in the fourth quarter.

Sims hurt his shoulder mid-way through the fourth quarter. He trots to the locker room for examination. Coker was getting loose. This was the one everyone wanted, right? Yes, or at least it appeared that way. Coker made his way onto the field and then it happened. The entire stadium started to shake. Chants of “We want Blake” filled the air. It was insane. Coker was under center, but the Georgia native finally broke home with the fan base.

The chants started it, but Sims’s return was unreal. Fans screamed. Students yelled. Players smiled. Sims returned to the huddle and tossed his fourth touchdown pass of the contest. He wanted love. Sims wanted an opportunity. He got it and finally started to produce results from it. Sims finished the contest with 484 total yards. Alabama defeated Florida 42-21.

Qualities in an Alabama Quarterback

A strong arm is nice. Mobility is a plus, but there is more to being an effective Alabama quarterback. It’s not easy being an offensive leader for the best team in college football. Sports writers can measure one’s abilities on paper, but they can’t  measure the heart of a quarterback.

Blake Sims has toughness and leadership qualities, but perseverance is his best trait. How many people really love reading The Little Engine That Could? Seeing that train go makes people want to turn the page. Competition made Sims stronger, but it dismissed five former Alabama players.

Star Jackson, Phillip Sims, Phillip Ely, Parker McLeod and Luke Del Rio all had potential. Each of them possessed a strong arm. Jackson and Sims were dual threat quarterbacks. Being good doesn’t cut it at Alabama. Anyone can be good. What makes you different? What new can you bring to the table? Questions like these caused those five men set sail elsewhere.

They left. Blake Sims stayed the course. He took coaching and grew from it. He accepted competition and learned from it. Most of all, Sims has connected well with his teammates. An athlete can have every talent in the world, but it means nothing if they can’t communicate with their teammates.

It took seven months, but Blake Sims has done it.  He’s transformed himself from liability to leader in Alabama’s offense. Sims has proved doubters wrong and strengthened faith in those who believed in him.

Could Sims effectively pass the ball? This was a burning concern in the offseason.

Sims has answered that question with a resounded “Yes” through eight games. He’s completed 65.5 percent of his passes for 2,034 yards, 20 total touchdowns (15 passing, 5 rushing) and three interceptions.

ESPN has begun to sing Sims praises. He leads the SEC and is second nationally in total quarterback rating (90.7). Today, Sims was named as one of 16 semifinalists for the Davey O’Brien Award (best quarterback nationally).

Sims has established himself as a starting quarterback. He has the tools to be successful. Sims has a chance to go from doubted to destine. Can Alabama win a national title with Sims? 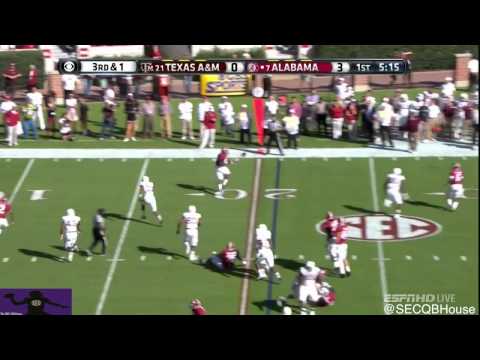