Chris Black [A] – Chris Black got an opportunity to shine against Western Carolina and he made the most out of it. He led Alabama’s receiving corps with six catches for 101 yards. Black was in rhythm with Blake Sims and Jake Coker. He displayed exceptional route running skills.

ArDarius Stewart [A] – ArDarius Stewart got the nod to replace DeAndrew White (hamstring). Stewart’s hands and speed both were on display against Western Carolina. He caught five passes for 51 yards. Stewart built a connection with Sims on the field, despite one flaw in communication.

Robert Foster [A] – Robert Foster hasn’t been seen much since A-Day, but Alabama unleashed him Saturday against the Catamounts. Foster totaled four receptions for 40 yards, including a 14-yard catch that set a touchdown pass from Coker to Michael Nysewander in the third quarter.

Cam Sims [A] – Cam Sims collected three passes, but none were better than his first one. Sims’s first reception was a 4-yard touchdown catch in the first quarter from Blake Sims. The score tied the game at 7. Sims finished the contest with three catches for 33 yards and a touchdown.

Summary: Alabama’s receiving corps held its own without DeAndrew White and Amari Cooper. Cooper suffered a bruised left knee in the first quarter. He could have returned, but decided not to. Cooper ended with three catches for 46 yards. Chris Black led the group, but many players got involved. Derrick Henry and Michael Nysewander both caught a touchdown pass. O.J. Howard had two receptions for 33 yards.

Derrick Henry [B] – Derrick Henry still needs to improve on ball security, but he handled the load well against Western Carolina. He totaled 92 rushing yards (7.7 yards per carry) and two touchdowns on 12 carries. Henry provided a nice balance of speed and power.

Tyren Jones [A] – Tyren Jones is elusive. Alabama fans witnessed his value Saturday against Western Carolina. Jones didn’t have a single negative play. He recorded 75 yards rushing (6.8 yards per carry) and a touchdown on 11 carries. Jones did a nice job of setting up cutback lanes with his vision.

Altee Tenpenny [A] – Discipline is what separates Altee Tenpenny from being a productive Alabama running back. He had a solid performance against the Catamounts. Tenpenny averaged 5.8 yards per carry. He rushed for 64 yards on 11 attempts.

Summary: Alabama rested T.J. Yeldon, but everyone else came to play. Derrick Henry anchored the group, but Tyren Jones, Altee Tenpenny and Jalston Fowler all put in a solid day’s work. Fowler totaled 30 yards rushing on five carries. Even Buddy Pell made an appearance, adding 15 yards to Alabama’s stats sheet.

Blake Sims [B] – Blake Sims didn’t have a great homecoming performance, but he got a win nonetheless. He had a few communication issues with receivers, including one that led to a Trey Morgan interception in the first quarter. Sims regained his composure in the second quarter and became more accurate with his delivery. Sims finished the first half on a high note, completing 17 of 25 passes for 222 yards, two touchdowns and an interception.

Jake Coker [B] – Alabama’s matchup against Texas A&M was the last time fans saw Jake Coker, prior to Saturday’s game against Western Carolina. Coker has the arm strength, but he needs more experience. He displayed footwork in the pocket and made some nice throws. Coker finished 12/18 passing for 115 yards and a touchdown.

Summary: Blake Sims and Jake Coker both received playing time against Western Carolina. Sims performed well in the first half, despite an interception. Coker looked fluent in the second half. He managed the game well and recorded his fourth touchdown pass of the season.

JK Scott [A-] – JK Scott didn’t register a punt against the Catamounts; however, he did handle all of Alabama’s kickoffs. Scott averaged 63.6 yards per kick, totaling four touchbacks. He did have one kick go out-of-bounds, resulting in a 15-yard illegal procedure penalty.

Gunnar Raborn [B] – Saturday was a great day for two Alabama walk-ons, including placekicker Gunnar Raborn. Raborn filled in admirably for Adam Griffith. He nailed two of three field goals; including a 20-yard attempt that gave Alabama a 10-7 lead in the first quarter.

Summary: JK Scott and Gunnar Raborn excelled in Adam Griffith’s absence. Scott handled kickoffs well, while Raborn showed teammates, coaches and fans that he can be a capable kicker.

Summary: Alabama’s offensive line did well Saturday. The Crimson Tide achieved balance, totaling 612 yards of offense (288 passing, 275 rushing).  Alabama moved Western Carolina off the ball and allowed its backs to rip off huge runs. The Crimson Tide didn’t surrender a sack, but there were a few plays in which Sims and Coker didn’t have a clean pocket.

Linebackers [B] – Alabama’s linebackers missed some tackles, but played well as the contest went on. Trey DePriest led the group with 5 stops. Reggie Ragland and Xzavier Dickson each totaled four tackles. Dillon Lee and Rashaan Evans both had two stops apiece.

Alabama’s victory over Western Carolina has given it seven straight seasons with at least 10 wins. It’s difficult to get excited for non-conference games because a win is already expected. Alabama’s head coach Nick Saban is a perfectionist. The Crimson Tide defeated Western Carolina 48-14, yet Saban was disappointed in the lack of energy and focus Alabama had.

“I don’t think we started this game out like we had hoped to,” Saban said. “We wanted to maintain focus in which I thought our players did a nice job of all week in practice. It’s really up to me to make sure the guys have a right psychological disposition when we are playing games. I felt like we didn’t have much energy to start the game. We didn’t have a lot of energy in pre-game warmups, but I was proud of the way our guys played in the second half. They really competed through.”

“A lot of guys got to play this week,” Saban said. “It’s a good thing because we normally don’t get to play a lot of players. We obviously didn’t play some players, including T.J. Yeldon, DeAndrew White and Adam Griffith because we want them to get healthy. They could have played if they wanted to, but we chose not to play them to prevent reoccurring injuries.”

Health is more so important than winning in non-conference games. Programs want to win, but victory is much better when players are intact. Amari Cooper, Cam Robinson, A’Shawn Robinson, ArDarius Stewart and Brian Vogler all needed medical attention against Western Carolina.

“Coop just has a bruised left knee,” Saban said. “He could have gone back in and played. A’Shawn Robinson and Can Robinson both have ankle sprains. Both should be okay. ArDarius Stewart and Brian Vogler both have stretched knee ligaments. Those two guys will probably be the most questionable. Denzel Devall had an ankle injury in Thursday’s practice. We held him out of the game, but hopefully we will have him back next week.”

“I thought all our receivers played well,” Saban said. “Chris Black had some nice catches.  I thought Tyren Jones did a really nice job running the ball when he had to. Altee Tenpenny did okay. Jake Coker did a nice job. Robert Foster got to play some and he has a lot of ability. Foster has been making a lot of improvements.”

“We probably played more guys on the defensive side than what we’ve played all year long,” Saban said. “It was good to get those guys some opportunities. I know some guys got sacks, including #56 [Williams] and #62 [Frazier] and that was really good for them. I thought those guys did a really good job in terms of how they executed the game plan.”

Alabama has one game left on its schedule. It’s the game everyone will watch. The Crimson Tide will battle the Auburn Tigers next Saturday in the 79th edition of the Iron Bowl.  Alabama will rest up and practice this week, as it looks to erase the debacle of what happened in 2013. Alabama’s postseason dreams are in front them. Auburn stands as its final obstacle. The Crimson Tide can remove that obstacle with a great performance at Bryant-Denny Stadium next Saturday. 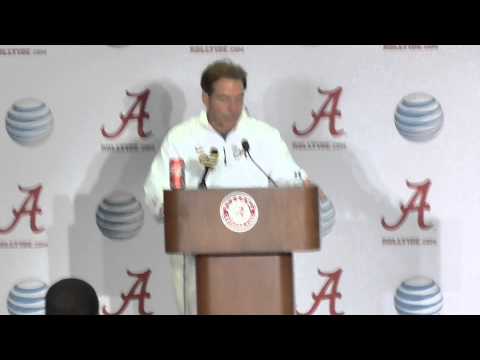